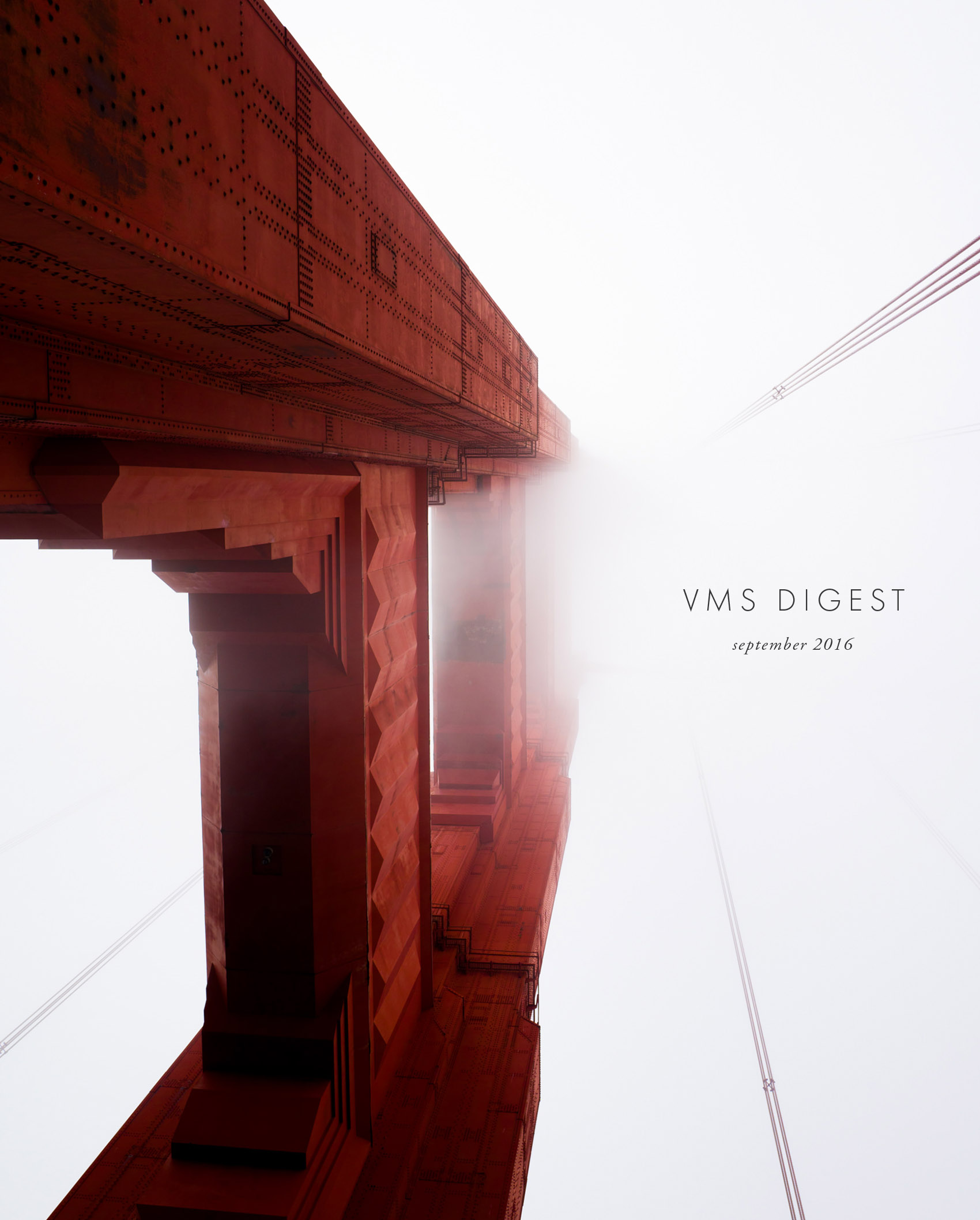 Friday, September 30 can only mean one thing. This month’s installment of VMS Digest, also known as your required weekend reading. Read on for my favorite stories, news items, launches and studio happenings.

CASHMERE SEASON // Why is Uniqlo cashmere so affordable? A fun look at how they make their sweaters, and keep the cost down (note: quality still intact!).

FRAMED // One of the craziest stories I read all month! This was a fun, bizarre, true crime piece from the L.A. Times that I couldn’t help but stay up late one night to finish.

THE HOUSE THAT VICE BUILT // Do you watch Vice on HBO? I was pleasantly surprised to see this profile on Vice founder Shane Smith in the Wall Street Journal this past month, which also showcased his family’s insanely gorgeous Santa Monica home. The details in this historical home are stunning! (PS, if you get the WSJ paywall blocking the article, try accessing it via this Facebook post).

WHEN IN FRENCH // Currently reading this beautiful little book. A while back, a reader (hi, Rose!), sent me a long excerpt of it from The New Yorker. I only just put two and two together this week, realizing it was the same writer (doh). Check it out here if you want a sample from the memoir! The writing is really wonderful.

A FITBIT FOR YOUR PLACENTA // Ok, not quite. But this new technology that can help monitor high-risk pregnancies is pretty incredible!

HOW TO GET OUT OF AN EMOTIONAL FUNK // You should write about it. Really.

PLEASE STOP // What to do if you have co-workers that won’t stop asking you out (and making things awkkk).

ROSE & IVY // The latest issue of the beautiful Rose & Ivy journal is out! Swing by for your quarterly dose of ridiculously pretty photoshoots and eye candy (and a fun interview with the co-founders of Veronica Beard…who are both named Veronica Beard).

SJP’s BACK AT HBO // Catching up with Sarah Jessica Parker, and all about her latest show for HBO, Divorce (SATC it is certainly not).

BUYING A MATTRESS ONLINE // Joe and I recently purchased a new mattress, though decided to go the traditional in-store retail route after looking around online. To be honest, if I’d read this piece about buying (and returning) a mattress purchased online, I might’ve reconsidered! A good read if you’re in the market for a new mattress.

HOW TO EMAIL // Keeping this short and sweet.

GET IN LINE // You’re finishing your grocery shopping, and are ready to check out. But which line to choose? If you want to get in the fastest line, pick the one with the person that has the most stuff. Say what?  It’s true, according to Little’s Law.

JUST WHEN I THINK I’M OVER IKEA… // Ok, a lot of the collaborations and new products IKEA is working on are pretty cool.

SOMEDAY // I want to go work the vendange, or grape harvest, in France.

I REALIZE THIS ONE’S IRONIC // A really fantastic essay from ex-political blogger Andrew Sullivan on distraction sickness. Yes, I realize it’s ironic given the nature of Digest posts…but I name this my must read of the week.

MORE THERANOS MESS // Ugh, the more reports that come out about what a mess Theranos is/was, the more insane it is that it ever took off at all.

THOUGHTS ON THE AIRPODS? // I still can’t with them, even though early reviews have been good. Are you going to use the new Apple AirPods?

IT’S REALLY ALL SUGAR’S FAULT // Everything we know about saturated fat and health is wrong! Well, almost everything. New reports show that the sugar industry paid researchers in the 60s to play down the link between sugar and heart disease, and instead, place the blame on saturated fat. Enjoy that steak tonight, guys.

SYMPATHY FOR DONALD // Some great political satire following Monday night’s debate. Because really, at this point, all you CAN do is laugh (ok, and cry and rock back and forth and ask to be woken up when it’s all over). And on a similar note, linguists try to explain his often nonsensical speaking style.

MILLENNIUM TOWER DRAMA // So, the drama over the sinking (and leaning) 58-story Millennium Tower is the talk of San Francisco. It has all the makings of city planning and real estate drama: a giant, luxury condo building that’s literally sinking into the ground (and, again, leaning), with developers who apparently knew it was already sinking before it was even finished, and current residents who have little to no recourse (one proposed plan is to lop off the top 20 floors). I’m especially fascinated by this story because when I moved to SF in 2006, I used to walk by the building site everyday on my way to school. At the time, it was just a massive hole in the ground. Crazy to think this is where we are now.

Early in my presidency, I went to Cairo to make a speech to the Muslim world. [I]n the afternoon, after the speech, we took helicopters out to the pyramids. [T]hey had emptied the pyramids for us, and we could just wander around for a couple hours [at] the pyramids and the Sphinx. And the pyramids are one of those things that live up to the hype. They’re elemental in ways that are hard to describe. And you’re going to these tombs and looking at the hieroglyphics and imagining the civilization that built these iconic images.

I still remember it — because I hadn’t been president that long at that point — thinking to myself, There were a lot of people during the period when these pyramids were built who thought they were really important. And there was the equivalent of cable news and television and newspapers and Twitter and people anguishing over their relative popularity or position at any given time. And now it’s all just covered in dust and sand. And all that people know [today] are the pyramids.

Sometimes I carry with me that perspective, which tells me that my particular worries on any given day — how I’m doing in the polls or what somebody is saying about me … for good or for ill — isn’t particularly relevant. What is relevant is: What am I building that lasts?

From a wonderful conversation with the President.

+ The September/October playlist is up! Check it out here.

+ I talked about the kinda funny ways I’m extending the life of my denim, and avoiding the dry cleaners.

+ I finally wrote about my journey with fatigue this past spring/summer. Thanks again for all your support and interest on this post!

+ We obsessed over blush together.

+ Other fun work updates that you definitely missed because I haven’t talked about them yet: it’s been a good month in the studio! A launch with plenty more in the queue, and Lisa and I are finally (after years of talking about it) putting plans in motion to launch a theme/templates shop next year. I’ve also begun a new role doing some work for my friend Jillian over at Sweet & Spark. It’s been fun taking on more of an Art Director role, which is something I’ve been interested in exploring. Lots more to come there, we’re only just getting marketing plans laid out. Onwards and upwards!

+ Everlane’s launching the first of its cashmere, and a new collection of winter coats very soon (I’m legit planning on buying a cashmere sweater from Uniqlo to compare to Everlane, just to see how this affordable cashmere thing pans out!).

+ Researching where to go and what to do in Kauai. Have you ever been? Gimme your recs!

+ New bras from Natori. I went into Nordstrom last week with the intention of getting ONE THING (a new strapless to replace a very sad old one), and let’s just say the sales lady was really good at her job. I went home with a couple of these new “Envious” bras from Natori, and guys, I think I like them a little more than the Feathers. Still wearing and testing under lots of things, but they’re incredibly comfortable. I also took home this little bralette which was a godsend during the recent SF heatwave.

What is VMS Digest?

A new-ish monthly feature sharing my favorite links, posts, articles, and things you simply have to know about. Read previous Digests here.