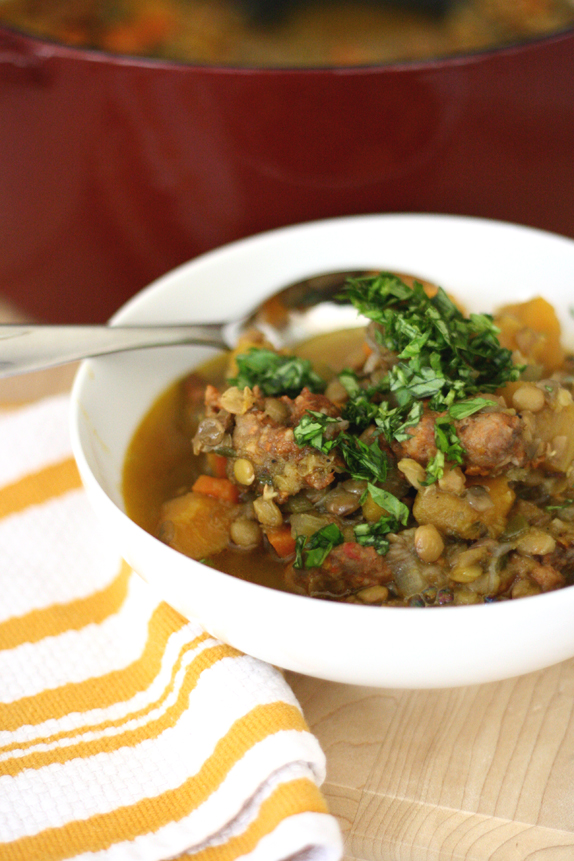 When we were freshmen in college, Joe and I lived in the same dorm. There was a major cafeteria in the bottom floor, where most of the freshmen on our side of campus ate, and it was notoriously bad (the campus went into an uproar when, in the spring of our freshmen year, it got a C health rating — both hilarious and totally gross). In any case, because of meal plans and what not, it was inevitable that as a student, you ate there regularly, if not everyday. Most of the hot items were suspect (I began to live off sandwiches and salads that I’d make for myself at the salad bar), but there was one soup that Joe and I were totally obsessed with: lentil and sausage.

I can’t really remember eating a ton of lentils growing up, when they still had a rep of being hippie food. But my dorm’s lentil and sausage soup was delightful. Thick, hearty, packed with veggies and big chunks of sausage. Because of this, lentil and sausage stew is a staple that I make at least a few times each fall — it totally brings Joe and I back to the good ol’ days.

I’ve actually never been able to figure out what made the cafeteria’s soup so good (I can never get mine to taste like theirs), but I’m pretty satisfied with my own, updated version, which adds butternut squash to the mix. This is a total “set it and forget it” type soup; once you get everything sauteed and into the pot, you can let it go for however long you want. It needs no thickening agent, since the softened squash and lentils will make it thick and satisfying. It’s healthful, delicious, and the perfect thing for an autumn dinner (and of course, lunch the next day!). Here’s the recipe: 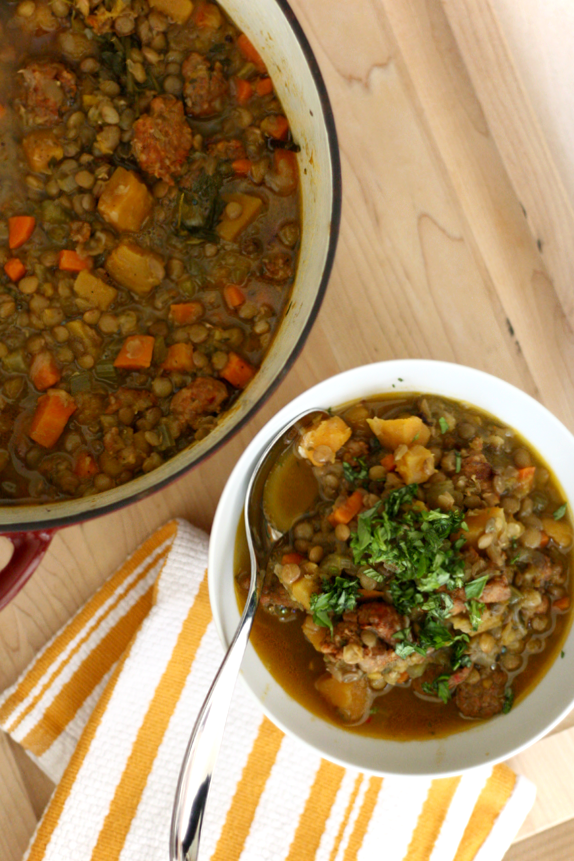 Lentil and Sausage Stew
Easily serves 6 as a meal; I like to make a pot and eat it throughout the course of a week!

In a large, heavy bottomed pot or Dutch oven, combine two tablespoons of the olive oil and all of the sausage. Heat over medium to medium high heat. Use a wooden spoon or spatula to break up the sausage so that it’s in large, chunky pieces. Cook the sausage until it is browned on both sides, then remove to a bowl. Set aside.

Simmer for at least five minutes, so that the alcohol can burn off the beer. Add in the chicken stock, the browned sausage and the lentils, and season the stew with more salt and pepper — especially if you are using low sodium chicken stock. Cover, and simmer of medium low heat for at least an hour, but you can really let it cook for a few hours if you need to. Stir occasionally.

You’ll know the stew is ready when the lentils are soft and tender, and the squash breaks apart when you smush it with a spoon. Break up a few of the squash pieces if you’d like to thicken the stew even more. Remove the bouquet garni and discard. This is excellent served with a drizzle of olive oil and a sprinkling of chopped parsley or basil. Enjoy!