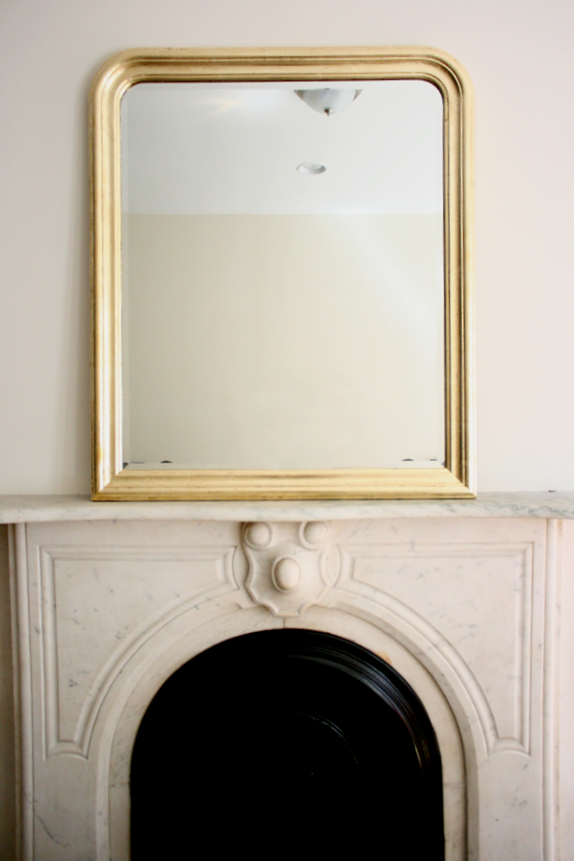 This is less a post on how to DIY with gold leaf, and more an update to tell you about my own experience in case you’re wanting to attempt it! The good news: it was surprisingly easy, scared as I was to ruin the amazing mirror we had found at a thrift store. The bad news: if you don’t have a vacuum cleaner, don’t even attempt this type of project.

First things first. Major props to Jenny and her gold leafing DIY post on Little Green Notebook, which I basically memorized before embarking on this project. It was really helpful, though my own frame had one major difference from hers (which we’ll get to in a sec).

As I mentioned before, I used this gold leaf kit, which I bought off Amazon. It comes with 25 sheets of gold leaf, which based on Jenny’s post, I was hoping would be enough. My mirror was smooth and perfectly finished, and didn’t need to be cleaned or sanded at all, so I got to work applying the adhesive size, waited for it to dry completely clear, and then started adhering the gold leaf. Here’s what I found (plus, some more pics of my finished mirror): 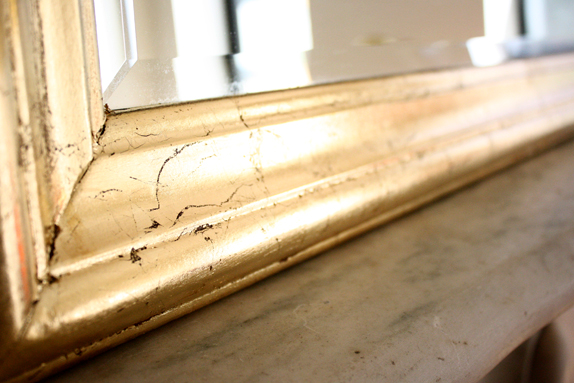 + Beveled surfaces are much, much tougher

Because my mirror has so many beveled edges on the frame, the gold leaf would get stuck in some areas, pull taut, and not press into the nooks and cranies. So sometimes the leaf would rip, and there was a LOT of going back and filling in gaps with extra little pieces of leaf. Even now, there are some ‘cracks’ in the finished product, which we’ve left because we like the patina-ed, antiquey, non-perfect look it gives, but if that’s not the look you’re going for, gold leafing can be difficult. On any surface that’s not completely flat with right angled edges (like Jenny’s frame), the leaf WILL rip, it’s just a fact of life. I’m leaving some of the gaps in our frame for now, but I might go back and do a little more patch work in the future.

Jenny said she used one pack for a 55″ frame, so I thought I’d be set with one pack too. Ummm, no. Homegirl is amazing at crafting and DIY stuff, whereas I am a newbie at best, so she was probably a lot more efficient at laying out the gold leaf than I was. I used up one pack, and had to order another one to finish the job. All in all, I would guess I used about 40 sheets of gold leaf. If you’re not sure, I would go ahead and buy extra. 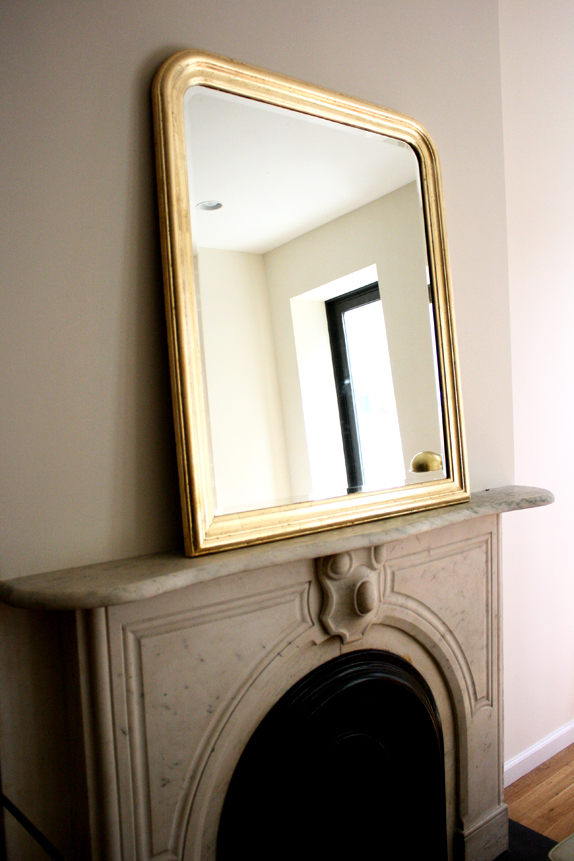 + Absolutely use a foam brush

During the first round of leafing, I used a soft 1″ foam brush to paint on the adhesive, and then another clean one to gently poke the gold leaf into all the nooks and cranies. The second time around, I used my fingers and a soft cloth. The results with the dry foam brush were MUCH better. At the end of the project, once things are dried and set, you can definitely run a cloth over the gold leaf to smooth it out and give it a burnished look, but having the foam brush just made things easier from the get go. Do yourself a favor and pick up 2 or 3 from your hardware store before you start (they’re less than $1 each!).

+ Tape newspaper to the floor before you start

During round 1, I taped some trash bags to the floor, but the plastic created static and just made things difficult as I tried to gold leaf. The second time around, I just left the floor bare (so dumb) and accidentally spilled the little bottle of adhesive, which led to a frantic clean up sesh. I’m the queen of taking shortcuts during these things, and I always regret it, so take it from me: just tape some old newspaper down on the floor. We (unsurprisingly) don’t get a newspaper delivered here, but I could’ve saved myself the panic attack had I walked to the corner and grabbed one of those free daily newspapers. Having the paper down will help catch any swipes of adhesive that you might miss as you apply it to the sides of your frame, and it also catches those little flakes of gold leaf. And on that note… 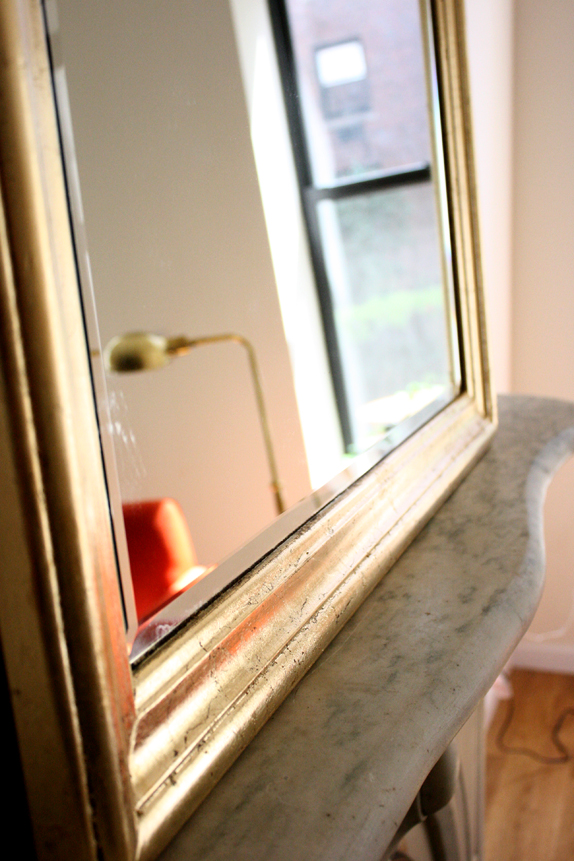 + Get your vacuum cleaner ready

Gold leafing is kind of messy work. It didn’t really bother me, because we have a nice, big vacuum cleaner that I ran over the area after it was done, but I highly recommend you attempt any gold leafing on a hard surface, not on a rug or carpet or anything like that. Those flakes are gossamer thin, and will float and stick everywhere. Even though I worked on my mirror on a wood surface, I’m still finding little flakes of gold leaf on the rug several feet away. Kind of fun if you pretend it’s from a party you threw…except, then you realize, it’s not.

All in all, I would totally gold leaf again. Given how crafting incompetent I am, I felt like it was pretty easy and I’m overall pleased with the results. And I think gold leafing is probably much easier on smaller items than a big mirror like I did. My mirror doesn’t look professionally gilded exactly, but the look is extremely similar to pieces I’ve been coveting in magazines and Pinterest (like here and here), and all for under $75 when you tally up the cost of the mirror and the two leafing kits (compare that to this mirror — yikes!).

I have a little bit of gold leaf left and am even thinking about adding it to a painted canvas for some simple, homemade artwork. What about you? Have you ever tried gold leafing anything?