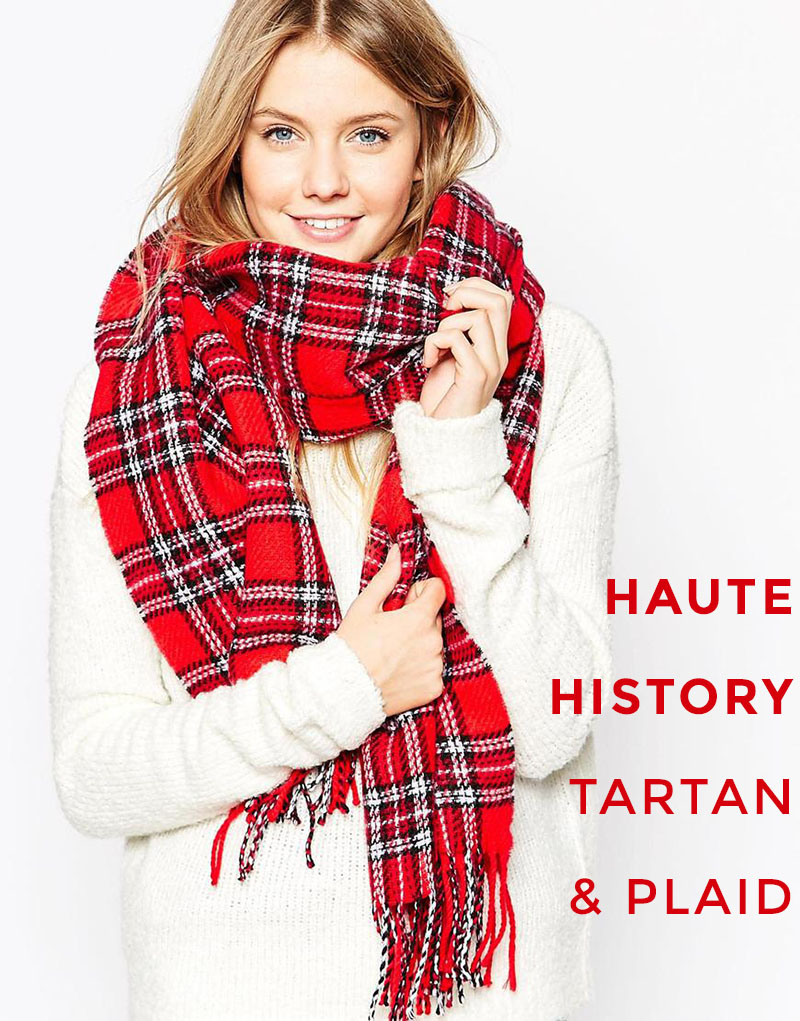 It’s been a while since I did an Haute History column, so today, I thought I’d chat with you about the history of tartan and plaid. It’s always been a winter staple, but with the advent of the blanket scarf, it seems especially popular these days!

First things first — what’s the difference? Well, as interior designer Scot Meacham Wood told House Beautiful, all tartans are plaids but not all plaids are tartans. He explains the difference from a pattern standpoint:

“All plaids and tartans are comprised of stripes (in varying sizes and colors) that meet at a 90-degree angle. We start heading into ‘tartan’ territory by looking at the geometry on the pattern. With most every tartan, the pattern on the stripes running vertically is exactly duplicated on the horizontal axis too. Basically, this matching pattern in both directions will create a grid. The warp and weft threads are then woven in a two-over-two “twill” pattern. When looking at a simple plaid, you’ll notice that the stripes — either in color, size, or pattern — are not the same in both directions.”

So that’s the difference design wise, but what about the history of each?

It may come as no surprise that originally, the patterns and colors used in a tartan design were meant to distinguish Scottish clans from one another (you can see a visual of patterns associated with each clan here!). And historically, the word “plaid” referred to a blanket-like accessory which was worn as outerwear by Scottish Highlanders, though in North America, “plaid” and “tartan” are now synonymous. In the mid-1700s, Britain actually outlawed the wearing of tartans, in an attempt to control the rebelling Scottish clans (it didn’t become legal to wear it again until 1782). There is so much history when it comes to tartans that I couldn’t possibly get into all of it here, but if you’re interested in learning more about it, I’ve left some resources at the bottom of the post! 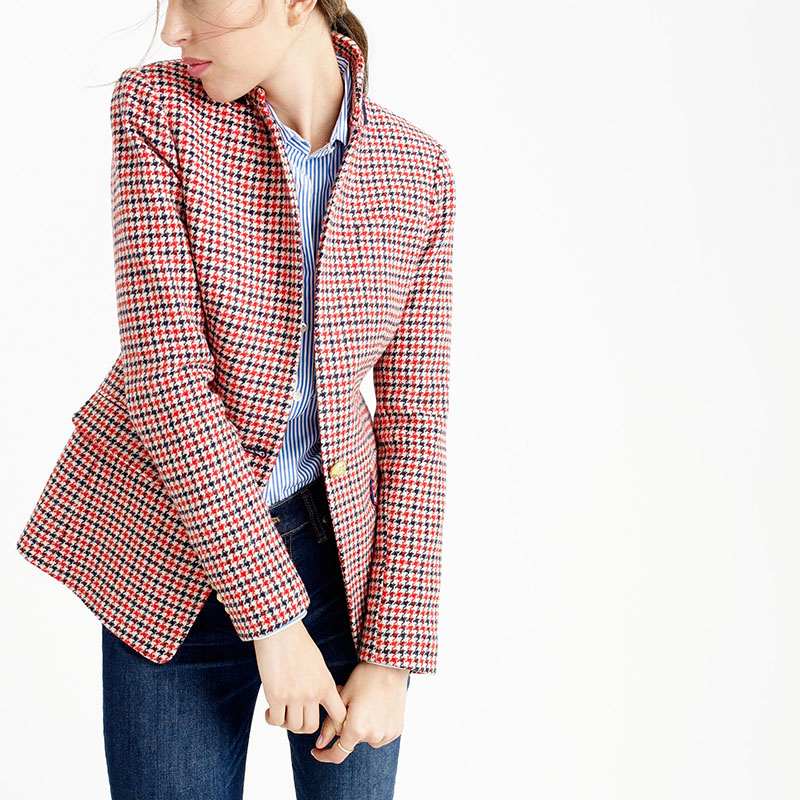 In the early 1800s, the pattern made its way to North America, and saw a big boost in popularity when in 1850, Woolrich Woolen Mills debuted the buffalo check pattern, that classic red and black plaid pattern we still see everywhere today (according to the company — which is still making the shirts — the pattern designer owned a herd of buffalo, which is how it got its name). In Victorian times, tartan patterns were heavily featured in fashion catalogues, and became something that wasn’t only worn by men.

Fast forward to the 20th century. It’s interesting to note that tartan’s symbolism seems to have ping-ponged back and forth between representing gentility/authority (from King George IV’s visit to Scotland in the 1820s — which prompted a tartan craze amongst the aristocracy — or its pastel, preppy, east-coast associations in the 1980s), to its earlier symbolism of rebellion/anti-establishment. Children of the early 90s will likely remember plaid’s strong association with grunge, right? But it’s also possible you may more easily recall how Clueless reclaimed it as a fashion forward, fun pattern that the girly-girl could wear too (remember Cher’s yellow plaid mini skirt and blazer combo?).

I find the history of tartan and plaid fascinating — it’s so rich and storied, and has permeated so many parts of our modern culture, fashion and otherwise! You can hover over each item to shop a few tartan pieces below, and be sure to check out my resources links if you’d like to learn more.

Learn More about Tartan and Plaid

Wikipedia: Tartan
How Did Plaid Become Popular? A Brief and Grungy Fashion History
A Brief History of Plaid Shirts
List of Tartan Patterns
Ask a Designer: What’s the Difference Between Tartan and Plaid?
Tartan: Textiles That Changed the World
Tartan: Romancing the Plaid 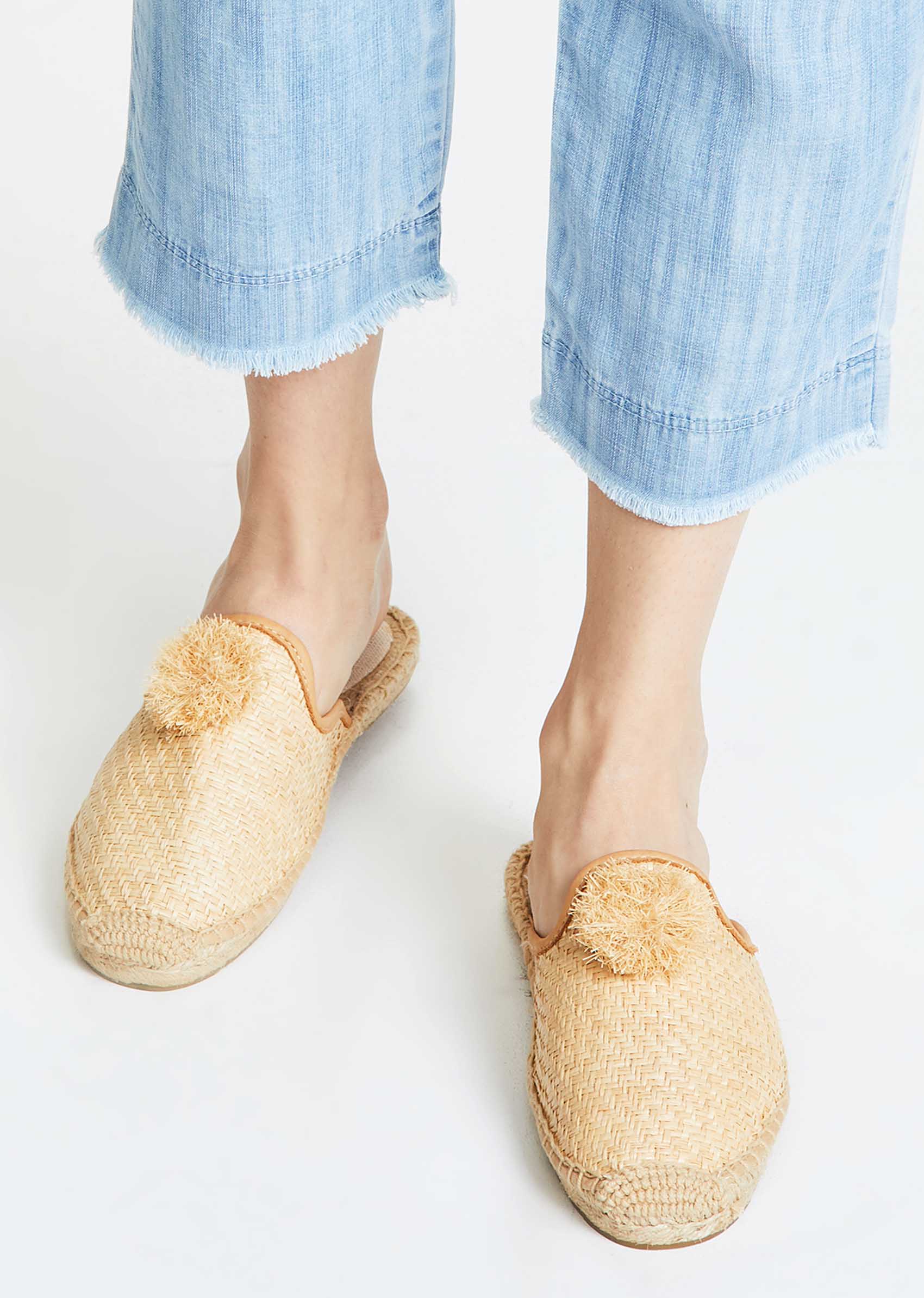