A Walk Through Southern Paris 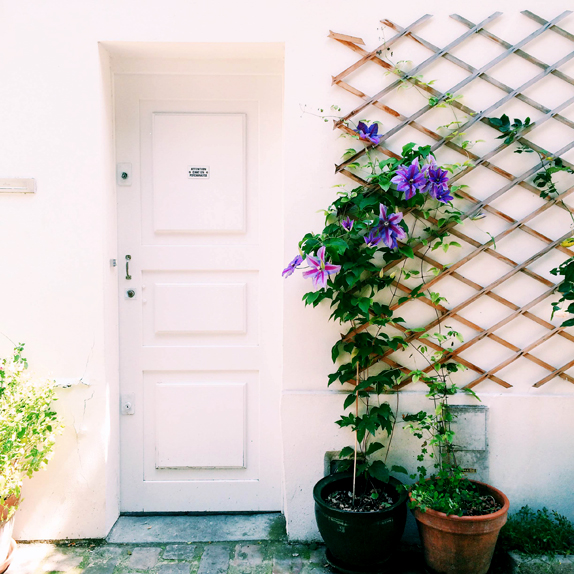 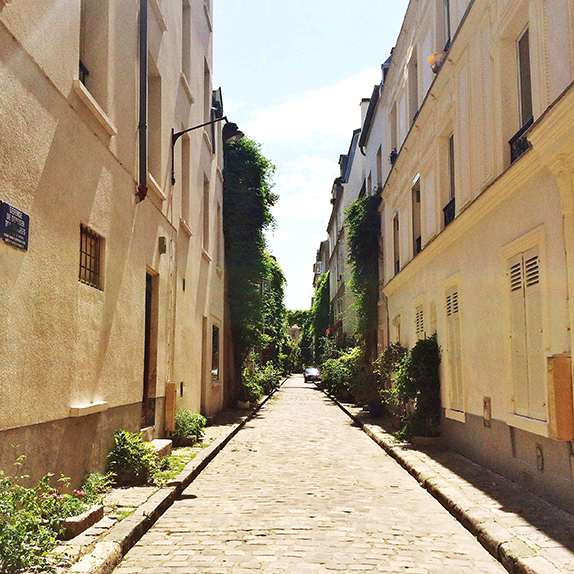 About a month and a half before we left for Paris, I received a lovely email from a blog reader and Parisian named Laurence. We corresponded a bit (in both French and English!), and Laurence told me about a small business she had recently launched to help visitors plan their trips to Paris. Part of her business also offers walking tours through the city — in both well known areas, and lesser known — and Joe and I happily accepted her offer to take us on a walk. Even with a few trips under our belt, there is still SO much of Paris we haven’t seen, and as a life long Parisian, Laurence was the perfect person to show us around the less touristed parts of the city.

She sent us a bunch of options, all of which sounded incredible, but in the end, we chose a walk through the 13th and 14th arrondissements, through the neighborhoods of Plaisance, Montsouris, and Butte aux Cailles, all located in the southernmost part of Paris.We wanted to see a totally different side of the city — something beyond the grand boulevards and the Haussman buildings — and that sums up this area perfectly! 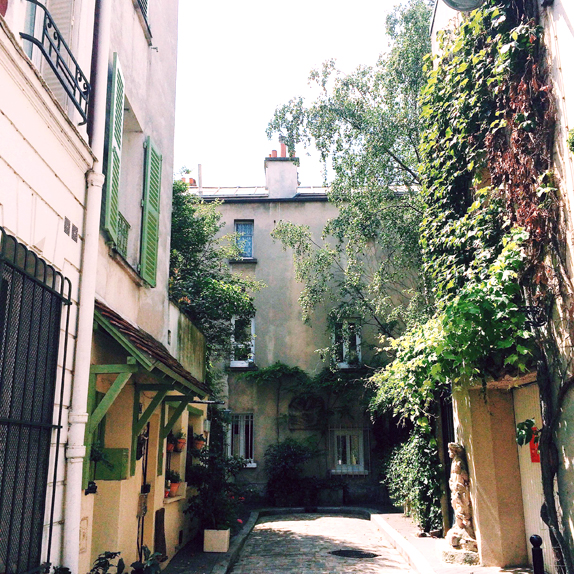 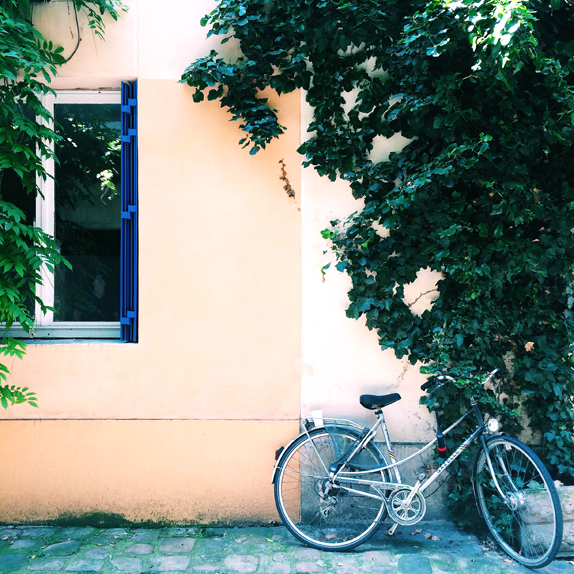 Our plan was to meet on the Rue Daguerre, a pedestrian market street. These types of market streets are common in Paris, and feature tons of place to shop for food, stop for a bit of refreshment, and of course, people watch. Funnily enough, Laurence, Joe and I ended up on the same subway train (in the exact same car)! She recognized us before we even got off the train (such a small world, isn’t it?), so we walked over to the Rue Daguerre together and grabbed a coffee. After, we began our walk through Plaisance, a neighborhood originally inhabited by mostly blue collar workers. Today, the neighborhood is filled with families, and the architecture couldn’t be more different from the rest of Paris. It reminds me of the French countryside — small little homes each with unique charm, many with ivy or other vines growing up their sides, all set on quiet, light-dappled cobblestone streets. 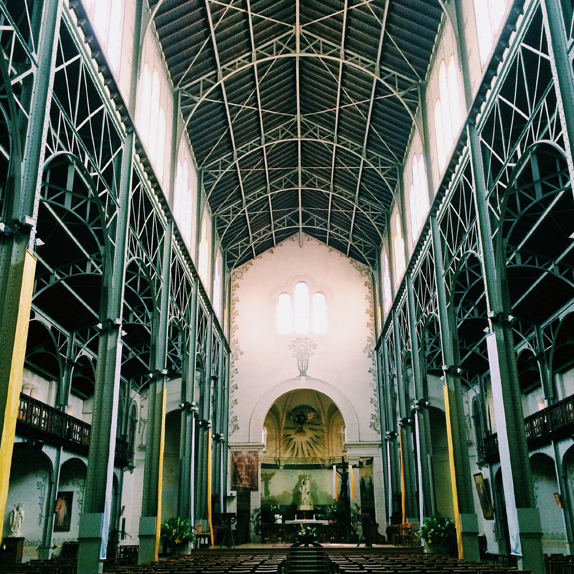 We stopped by a churched called Notre Dame du Travail, which is one of the most unique churches I’ve seen in France. In the late 1890s, the area was filled with housing for construction workers who were building the grounds that would host the 1900 World’s Fair. In an effort to make those workers more comfortable, this church was built using iron and steel, in a very industrial style. Makes sense, given that the name of the church translates to “Our Lady of the Work.” Interesting, no?

Part of our walk through Plaisance and the 14th included a stroll down the Rue d’Alesia, which (insider tip) offers lots of shopping and several outlet stores. 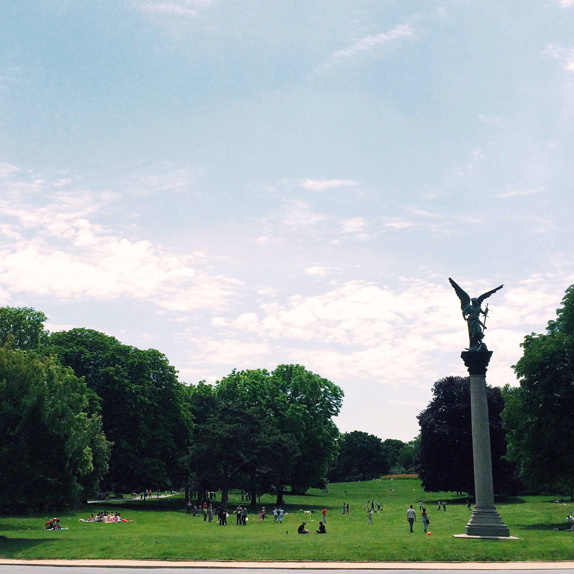 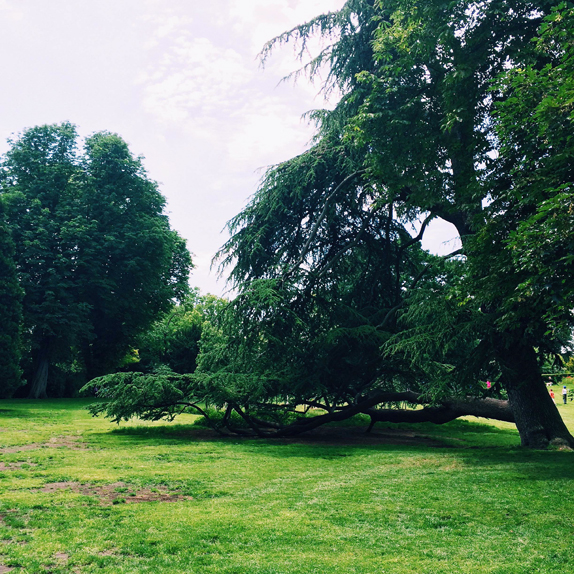 We stopped for a quick bite to eat, then ventured into Parc Montsouris. Opened in 1869, the park is one of four urban parks created by Haussman, each placed at the cardinal points of the city (i.e., north, south, east, and west). Parc Montsouris is done in the more casual “a l’Anglaise” style, so there are huge lawns of grass that you can actually sit and walk on! 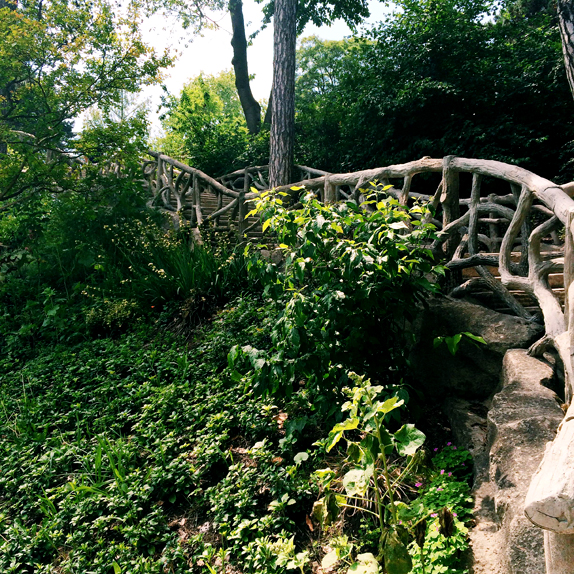 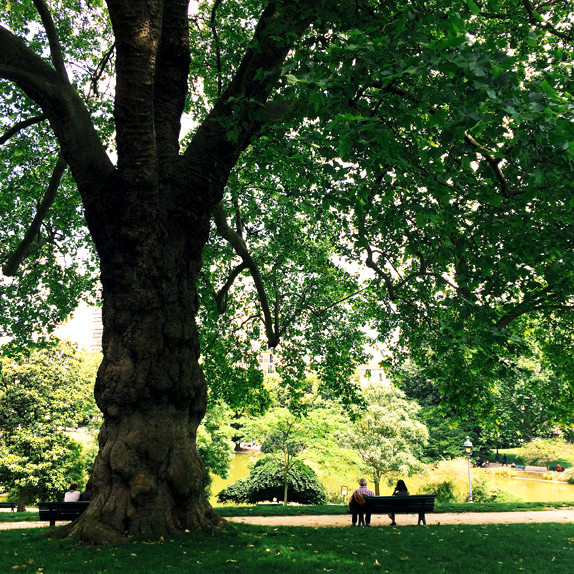 The trees in this park took my breath away. They’re HUGE! Parc Montsouris is also home to this beautiful little pond, which was the backdrop for the final scene in this piece from the film Paris, Je t’aime (which I also wrote about here). I loved the beautiful staircase pictured above, too. 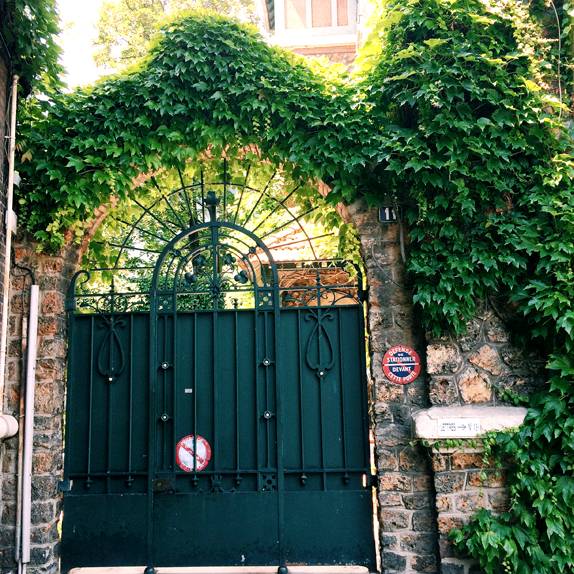 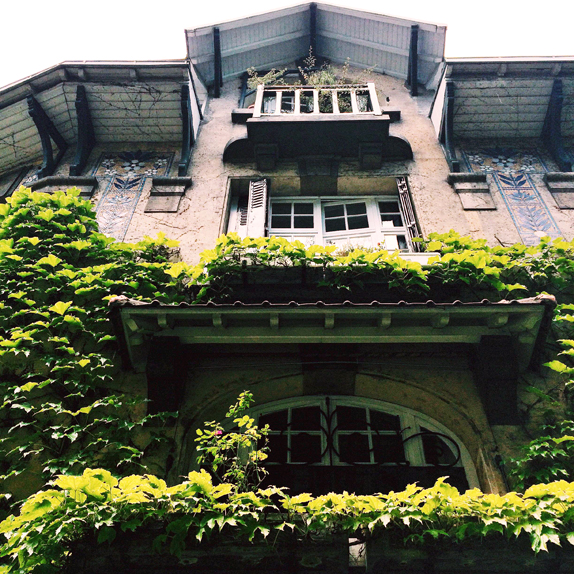 We wandered all through the neighborhoods around the park. Throughout much of the 20th century, many well known artists lived in this area, so it was neat to see some of their homes and also how various artists’ movements (like Cubism) influenced the architecture. I was so taken by the little Square de Montsouris (which to Americans would just feel like a street, not a “square”), which had ivy covering most of the homes: 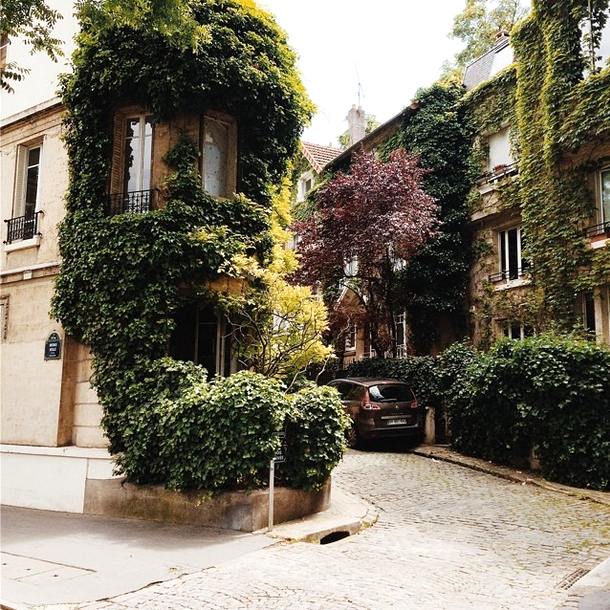 Next, we wandered into the neighborhood of Butte aux Cailles in the 13th, which (according to Laurence’s excellent notes for us) was originally a fenced-in village that was actually outside of Paris proper, and overlooked the BiÃ¨vre River, which now runs underground. Like so many of the outerlying neighborhoods, it was a very poor, blue collar area; these days, it’s slowly changing. I noted several adorable townhouses under renovation, and plenty of families in the area.

In this neighborhood, lots of the streets are named after the flora that grow on or near them; there was the Square des Peupliers (Poplar Square, which is actually a triangle)… 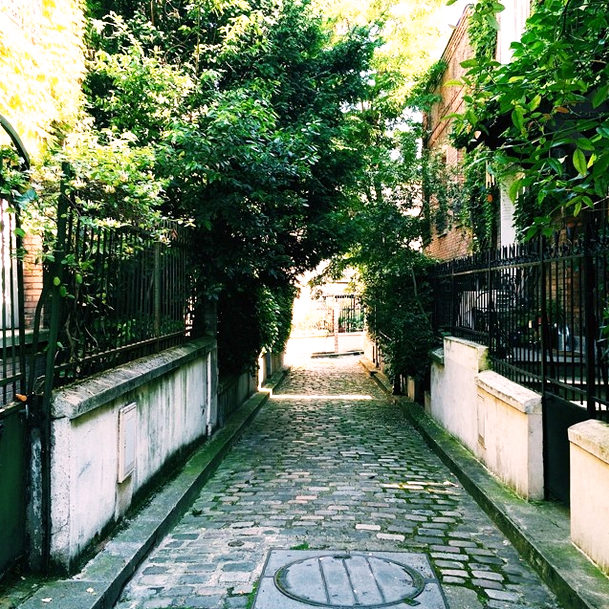 and the Rue des Glycines, for example (Wisteria Street): 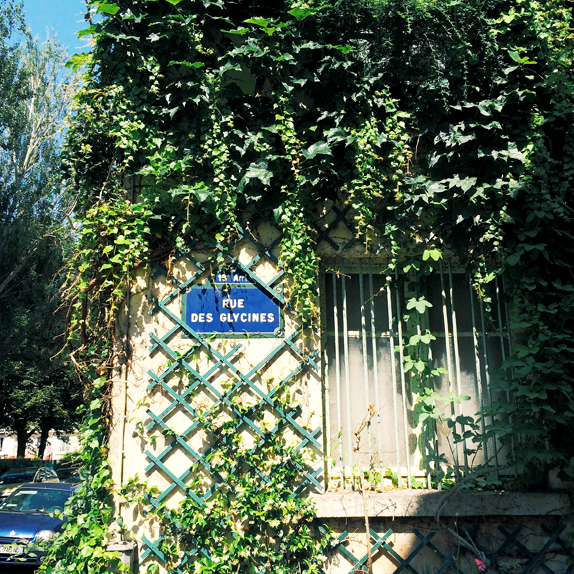 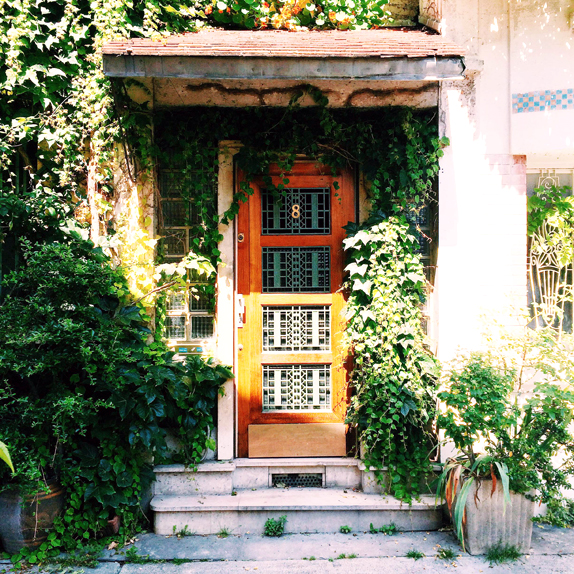 It’s definitely a quiet little part of Paris, but I loved getting a more “local” vibe for once — it was neat seeing the cafes and shops in the area, as well as unique neighborhood features like a big public well that sources natural spring water, in the Place Paul Verlaine. You don’t see that kind of stuff as much on, say, the Champs-Ã‰lysÃ©es.

I have to give a big shout out and thank you to Laurence for taking us around southern Paris (on foot!) for 5+ hours. She was super knowledgeable about the city and these tiny little neighborhoods, and she was even sweet enough to bring us this laminated booklet listing all the places we visited! A bunch of you guys have mentioned here on the blog and on Instagram that you’re planning trips to Paris, so I definitely recommend checking her services out. She can help you plan an itinerary, take you on a walk, or (heads up, non-French speakers!) even serve as an on-site concierge for you, and help you do things like make dinner reservations in French. It never ceases to amaze me how this blog has brought new friends into my life, and Laurence is certainly no exception. Thank you for such a fun day, Laurence!

And as for the rest of yous guys, I hope you guys enjoyed this little tour through a lesser known part of Paris!

All images taken by Victoria McGinley