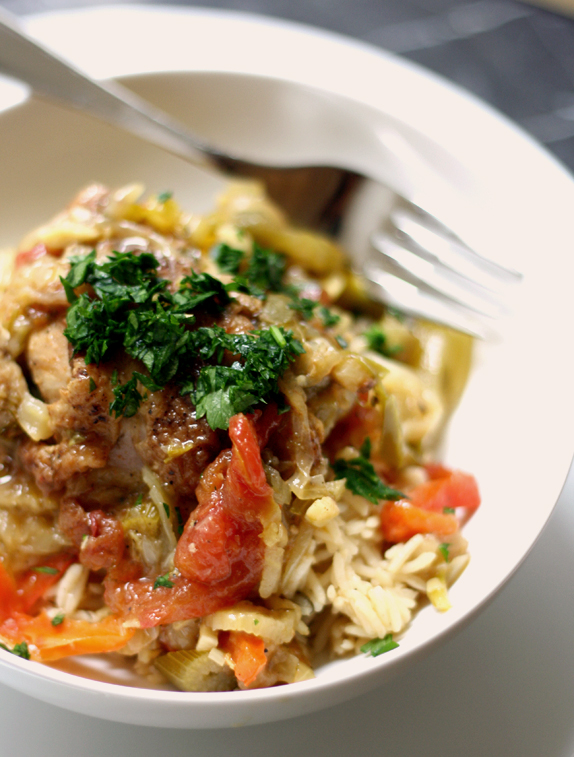 When I first started making this dish, I knew the flavors I was craving, but didn’t know why exactly. It’s not like this chicken recipe has any one provenance: the saffron and peppers make it slightly Spanish; the preserved lemon a bit North African; the mix of herbs definitely Mediterranean. It wasn’t until I took my first, satisfying bite that it hit me: my mother used to make a dish similar to this that she dubbed ‘Cuban Chicken.’ I don’t think there was anything that Cuban about it, except that it had pineapple in it. But funnily enough, it wasn’t the taste of pineapple that made the dish so deeply engrained in my memory; it was the satisfying, homey mix of good chicken, rice, and tomato all together. It sounds really random, but I promise you, it’s delicious.

The version that I accidentally invented over the weekend is a little more complex. The chicken starts out with a dusting of paprika and seasoning; the base of the sauce a heady mix of onion, celery, fennel, lemon juice, and saffron. You braise everything together for an hour or two, and then remove some of the cooking liquid to prepare the rice (why cook rice in water when you have the world’s most amazing cooking liquid right in front of you?). While this certainly isn’t a limited ingredient dish, once you have everything chopped and ready, cooking itself is very straightforward. Give yourself a little time on a weekend evening to make this, and you’ll be rewarded for several days to come (and on that note, this is a great take-your-leftovers-to-work dish!). 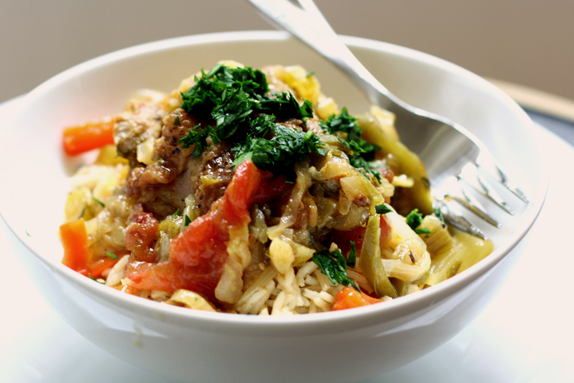 Place the chicken on a large plate, with the skin side of each piece facing up. Dust the chicken with the tablespoon of paprika, and season it well with salt and pepper.

In a large heavy bottomed pot or Dutch oven, heat the olive oil over medium to medium high heat. Once hot, add the chicken in skin side down to brown. Season the side of the chicken that’s facing up with salt and pepper (it’s fine to do this in the pot). Allow the chicken skin to brown, about 4 minutes, then use tongs to flip the chicken to the second side. Cook for another 3-4 minutes, or until the chicken is browned on both sides. Remove back to the plate and set aside.

Add the onion, fennel, garlic, and celery to the pot, and stir to coat with fat. Cook for at least 10 minutes, stirring regularly, until the onion is very, very soft and all the vegetables are fragrant and softened. Add the peppers, and cook for another 8-10 minutes, until they have also softened. By this point, you may have some browned bits on the bottom of the pot.

Deglaze the pot with the lemon juice, stirring to release the browned bits. Add in the tomatoes and the chicken stock, and gently stir. Next, add in the preserved lemon, the bouquet garni, and the saffron. Season the braising liquid well with salt and pepper. Add the chicken back into the pot with tongs, being sure each piece is partially submerged in the liquid. Pour off any juices from the plate into the pot too.

Cover and cook over low to medium low heat for 45 minutes. You want the liquid to be gently simmering, but not boiling. Remove the cover and skim the top for fat, so that the dish is not too greasy. Cover again and cook for another 30-45 minutes, or until you are ready to eat.

About 20 minutes before you are ready to serve the dish, remove 2 cups of cooking liquid from the pot. It’s fine if you get some veggies and herbs in here too! Combine the liquid and the basmati rice in a separate pot, bring to a boil, and cook according to package directions (note: the rice I used required 2 cups of liquid to 1 cup of rice; if yours requires more or less, take that amount from the braising liquid). Fluff the rice with a fork once time is up.

To serve, spoon a bit of the rice into a bowl, then add a piece or two of chicken on top. Ladle the veggies and braising liquid over the top, and serve.