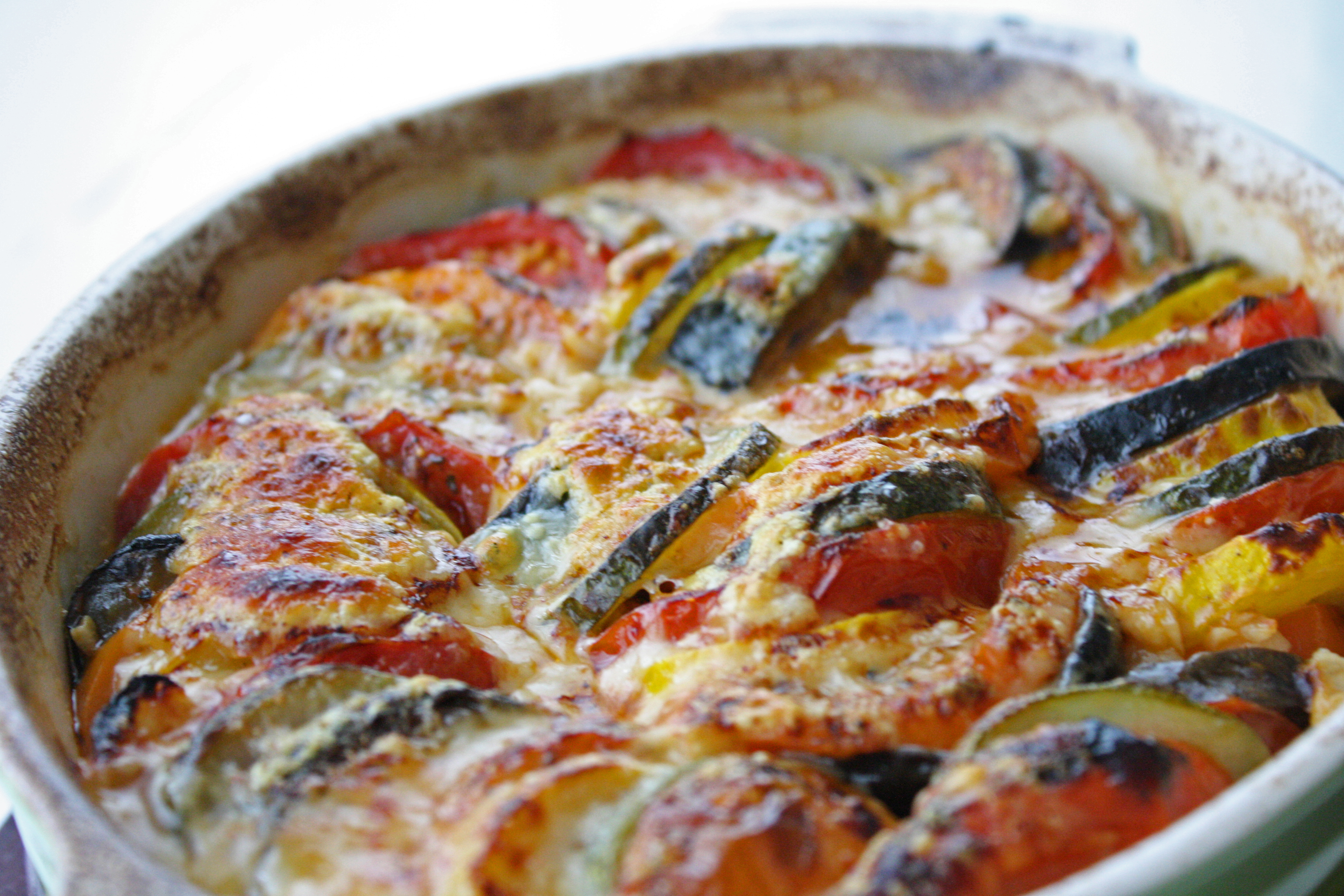 One of my absolute favorite dishes to make in the summer time is ratatouille. A traditional dish hailing from the Provence region of France (and pronounced rat-eh-too-ee…it took me forever to get it right), ratatouille is traditionally made by stewing together tomatoes, onions, peppers, eggplant, squash and herbs. There’s much debate about the ‘proper’ way to make it, and like many French dishes, it seems like the right way to make it is the way your grandmother did.

In any case, I had yet to make a batch this summer, and was dying to get back in to the kitchen after several weeks of vacationing and dining out. I had also had this image pinned on Pinterest for a while, and it inspired me to try my hand at a sort of baked ratatouille, made a bit more decadent (and very non-traditional) with a crusty, cheesy topping. All the same flavor, but it would look much prettier when it was finished! As I was making this, I remembered another French dish called confit byaldi, which is a variation on ratatouille and was also featured in the 2007 Pixar film by the same name. Mine is definitely not as fancy as that, but it was SO simple to put together and it tasted like summer. On a Wednesday night in August, who can ask for more?

Serving: The recipe below makes enough for one large round baking dish. I divided my vegetables up in to one medium oval dish, and another smaller one. Depending on whether you were serving this as a main course or as a side dish, the recipe can easily feed between 2 and 4 people, perhaps 6 for small servings as an accompaniment.

Note about the vegetables: Be sure to purchase squash, eggplant and tomatoes that are roughly the same size in diameter. It doesn’t have to be perfect, but if you end up with a really skinny zucchini and a fat eggplant, you may have to do some trimming to get the dish to look as nice. When I made this dish, I used a regular bell shaped eggplant, and that made things more difficult, which is why I’m recommending the use of Japanese eggplant. They tend to be more cylindrical.

In a medium skillet, heat 2 tbsp of olive oil over medium heat. Once hot, add in the onions and let cook for a minute until they just begin to soften. Add in half of the chopped garlic, the crushed red pepper flake, and season with kosher salt and freshly ground black pepper. Continue cooking over medium heat, stirring occassionally, while you prepare the vegetables. Lower the heat if you notice the onions are browning too quickly.

While the onions cook, slice the ends off the squash and eggplant, as well as the stems off of the tomatoes. Then, slice each vegetable so that it is about 1/4″ thick. You can make this more thick or less thick — the most important thing is that you make your cuts consistent, so the vegetables will all cook evenly. If you make the cuts thinner, keep in mind they can cook faster; thicker, and they will take a bit longer (though the flavor can develop more).

Once the vegetables are prepped, add in the tomato paste to the pan with the onions. Stir to distribute and “melt,” until the paste has coated the onions and the mixture is fragrant. Transfer the onion mixture to the bottom of your baking dish, and drizzle with a tablespoon or so of olive oil. 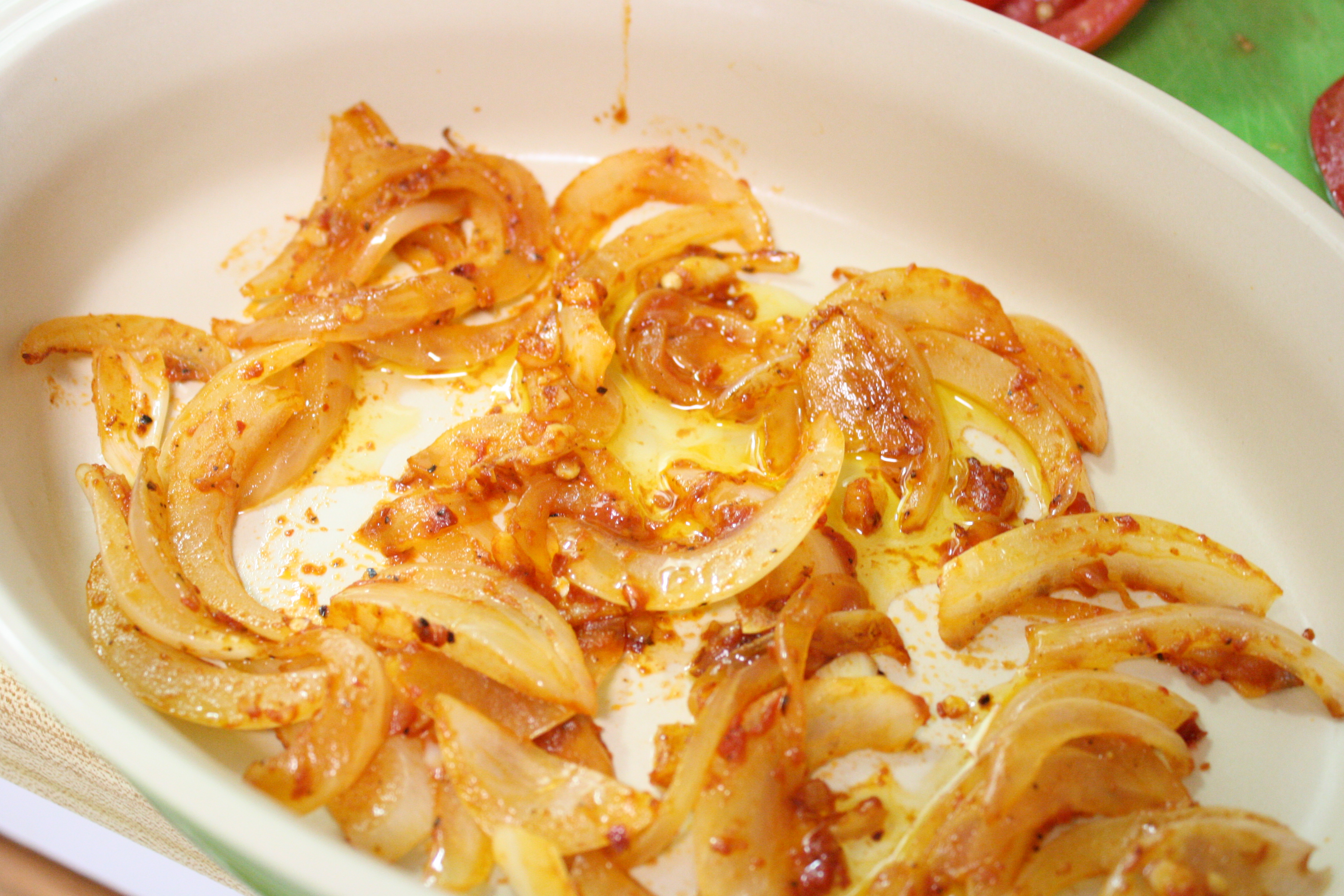 Next, begin arranging your sliced vegetables in the dish, alternating by color. You can arrange these in whatever pattern you want; I like to stack them in an outer circle first, then fill the inside area with leftover pieces. Sprinkle the rest of the garlic over the top of the arranged vegetables, then season the whole thing with salt and pepper, and drizzle with a bit more olive oil. 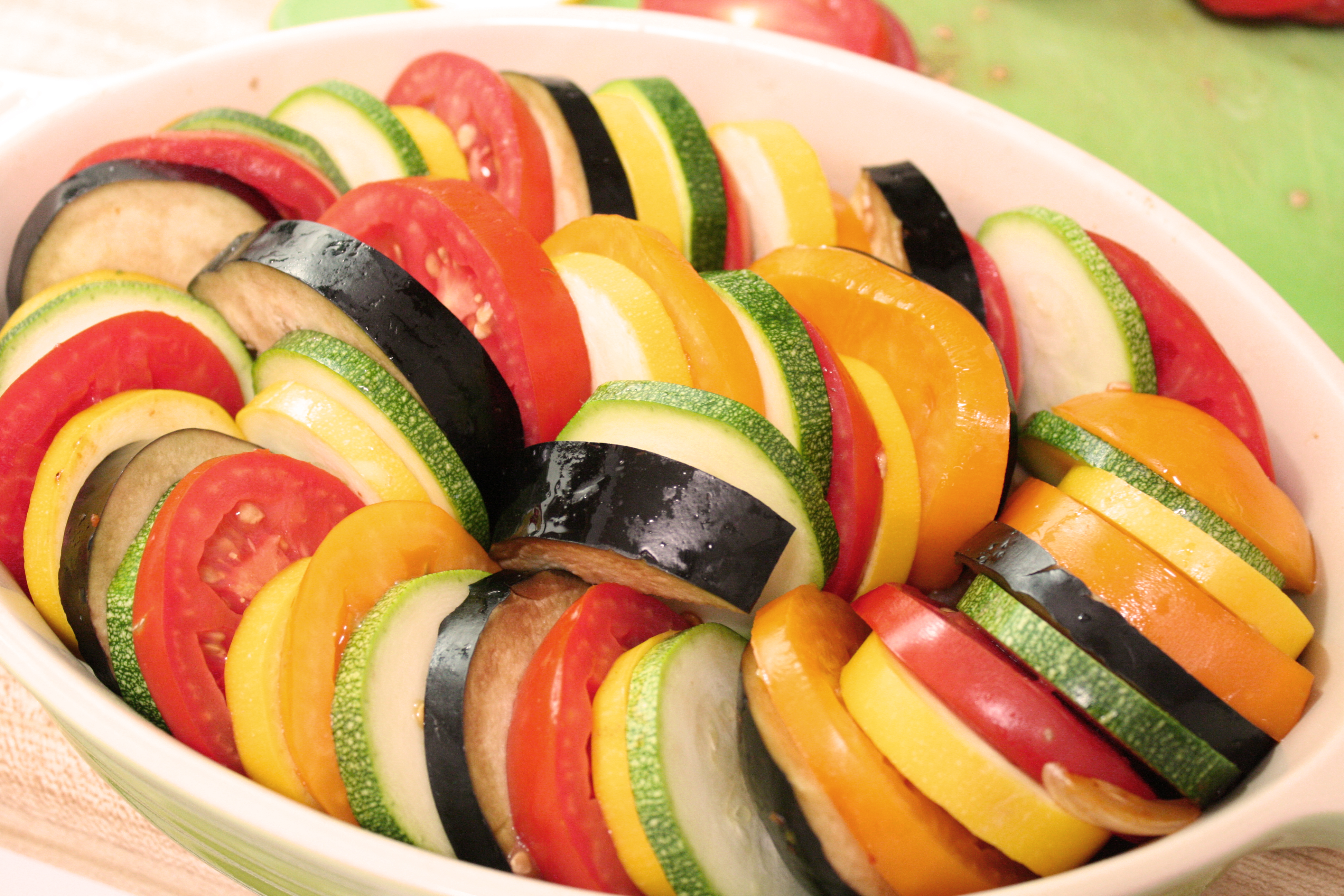 Cover the dish with aluminum foil and bake for 40 minutes to an hour, or until the mixture is very bubbly and the vegetables look tender. Remove the dish from the oven, and turn your broiler on to high. Layer shaved or sliced cheese on top of the cooked vegetables, then bake underneath the broiler until the cheese gets bubbly and brown. Let the dish sit for a couple minutes, garnish with freshly chopped basil, and serve. This is delicious with grilled steaks, roasted chicken, and would also be awesome with pasta or cous cous! 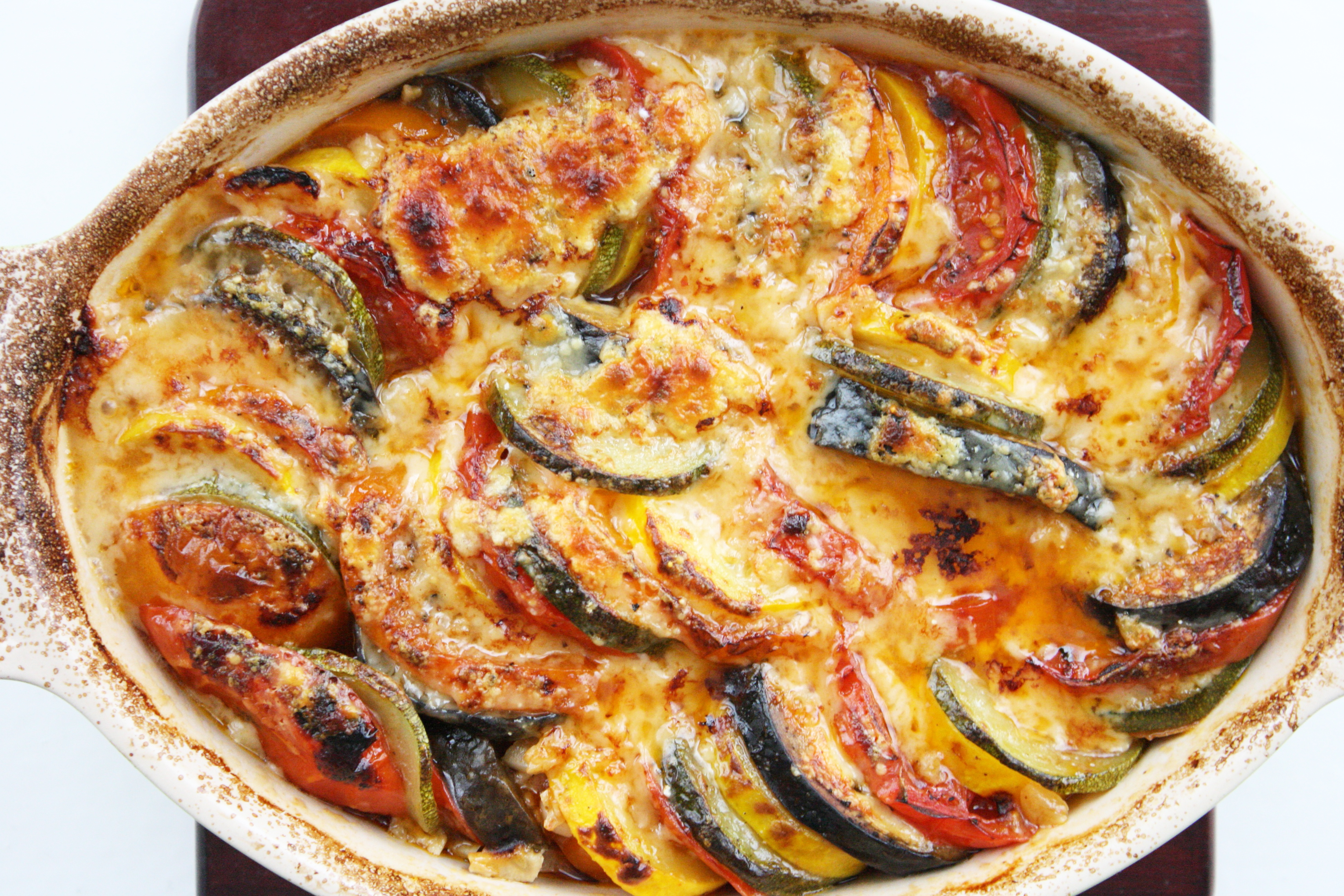