When I was in college, I watched Food Network all. the. time. My roommates can vouch for this. If there was a long enough break between classes, you can bet I was on the couch, drooling over what Giada was whipping up. Back then, I adored Everyday Italian, Good Eats, and Barefoot Contessa. I was even known to indulge in a little Paula’s Home Cooking, but mostly because I was so fascinated by the obscene amounts of butter and mayonnaise in every recipe!

However, one show (okay, and maybe personality) I could never get behind was Rachael Ray. The rest of the Internet has done a pretty good job of explaining why she’s often not a fave. Her…um…perky…disposition aside, for me it was bothersome that she promoted the use of shortcuts that I thought were frankly ridiculous, in that they allowed people to save mere seconds in the kitchen while not encouraging any kind of culinary skill development on their part.

Example? The one that always comes to my mind is telling her viewers to buy pre-chopped onions. Listen, I’m busy too, and I’m tired when I get home from work. But there is no universe in which I will ever be lazy enough to buy pre-chopped onion (at double or triple the cost, I’m sure) versus spending one minute (or less) to chop one. I think the moment she pulled pre-diced onion out of the fridge, packaged in styrofoam and saran wrap no less, was when I was done with Rachael. But. BUT. During Christmas 2009, I needed a recipe for vegetarian chili to use over the holidays, and in a pinch, found Rachael’s recipe for “Veg Head Chili.” It looked easy enough, with a good supply of different beans and veggies.

Lo and behold, it was a hit. And yes, it did take less than 30 minutes to make (and that’s without any pre-chopped veggies!).

Since that holiday, I’ve come back to this recipe so many times. One bowl is extraordinarily filling, and the chili will keep for a week in the fridge, making it perfect to take to work for lunch. The recipe itself is also versatile — you can sub in different types of beans, and garnish the chili with whatever you have on hand.

30 Minute Meals is definitely NOT my favorite show, but I have to give credit where credit is due. Rach, you did good with this one.

Do you guys have any tried and true recipes that you go to for a quick weeknight meal or for lunch leftovers? Share a link to them in the comments!

Over moderate heat, add oil to a deep pot and combine onion, peppers, and garlic. Saute for 3 to 5 minutes to soften vegetables. Season with kosher salt and black pepper. Deglaze pan with beer or stock, let simmer for one minute, then add tomatoes, black beans, red kidney beans, the garbanzo beans (if using) and stir to combine. NOTE:

Season chili with cumin, chili powder, hot sauce, and salt. Let the chili come to a simmer, then taste and adjust the seasonings with more salt and pepper, if desired. Thicken chili by stirring in refried beans. Simmer over low heat about 10 minutes longer, then serve up bowls of chili and top with the garnishes of your choice.

NOTE: When adding the beans to this chili, you DO use all the liquid in the cans. Because of this, I’d look for canned beans that aren’t stored in a high fructose corn syrup type solution. Beans with no added salt are also a good bet, too. 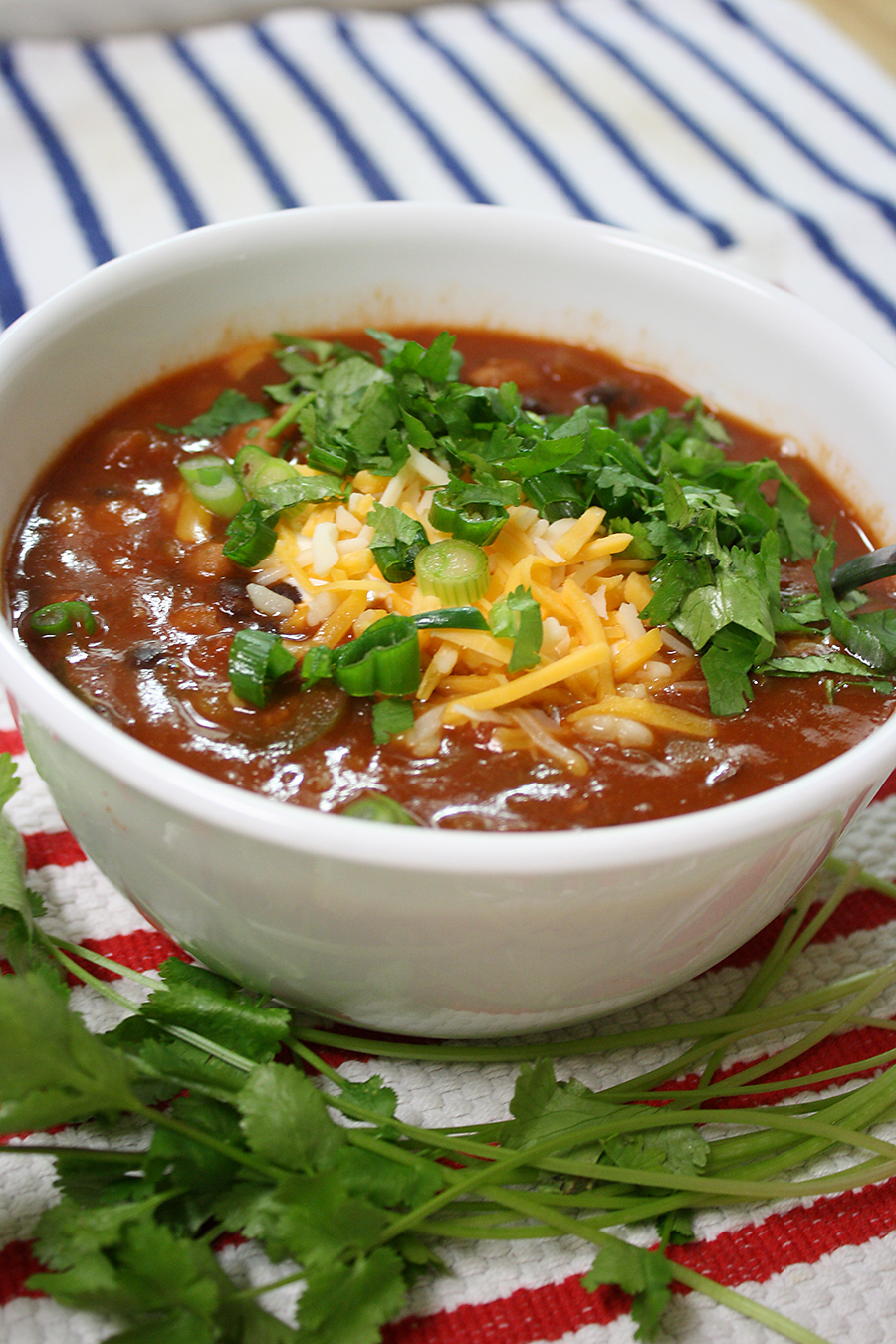