Saturday night, home from the grocery store and happily settling in to a re-stocked kitchen, I suddenly realized I had four count ’em FOUR heads of garlic. Joe and I love to cook with garlic, but getting through four bulbs would take a while, by which time they’d probably dry out.

My solution? I made garlic confit. Adapted from Thomas Keller’s Bouchon cookbook, garlic confit is a really fancy way of saying garlic gently cooked in oil. The end result are cloves so soft you can spread them on baguette, or incorporate them into mashed potatoes, or mix with butter and smear under the skin of a chicken before roasting. The possibilities are endless, really. The oil can be used too, any place that you’d normally use olive oil or vegetable oil (think amped up veggie sautÃ©s!). And it’s super easy to make.

To start, I used one and a half bulbs of garlic, and peeled all the cloves. This was the most labor intensive part, but only took ten minutes or so. You’re looking for around 20-25 cloves total. After all the cloves are peeled, you’ll want to use a paring knife to slice off the rough end of the clove, which you can see on the left.

I placed all the cloves in a small saucier, then covered them with canola oil. Be sure all the cloves are completely submerged in oil — you don’t want the oil only reaching half way up the cloves. Turn the heat to low, until little bubbles start to form around the cloves. The oil should not appear to boil, but gentle bubbles coming up is fine. The reason the cloves shouldn’t fry is that they will brown too quickly and may even burn. When that happens, the outside cooks faster than the inside, so they don’t get to that soft, smearable state.

Cook the cloves in the oil for about half an hour, or until you can easily pierce one of the large cloves with the paring knife, and the clove feels very soft. 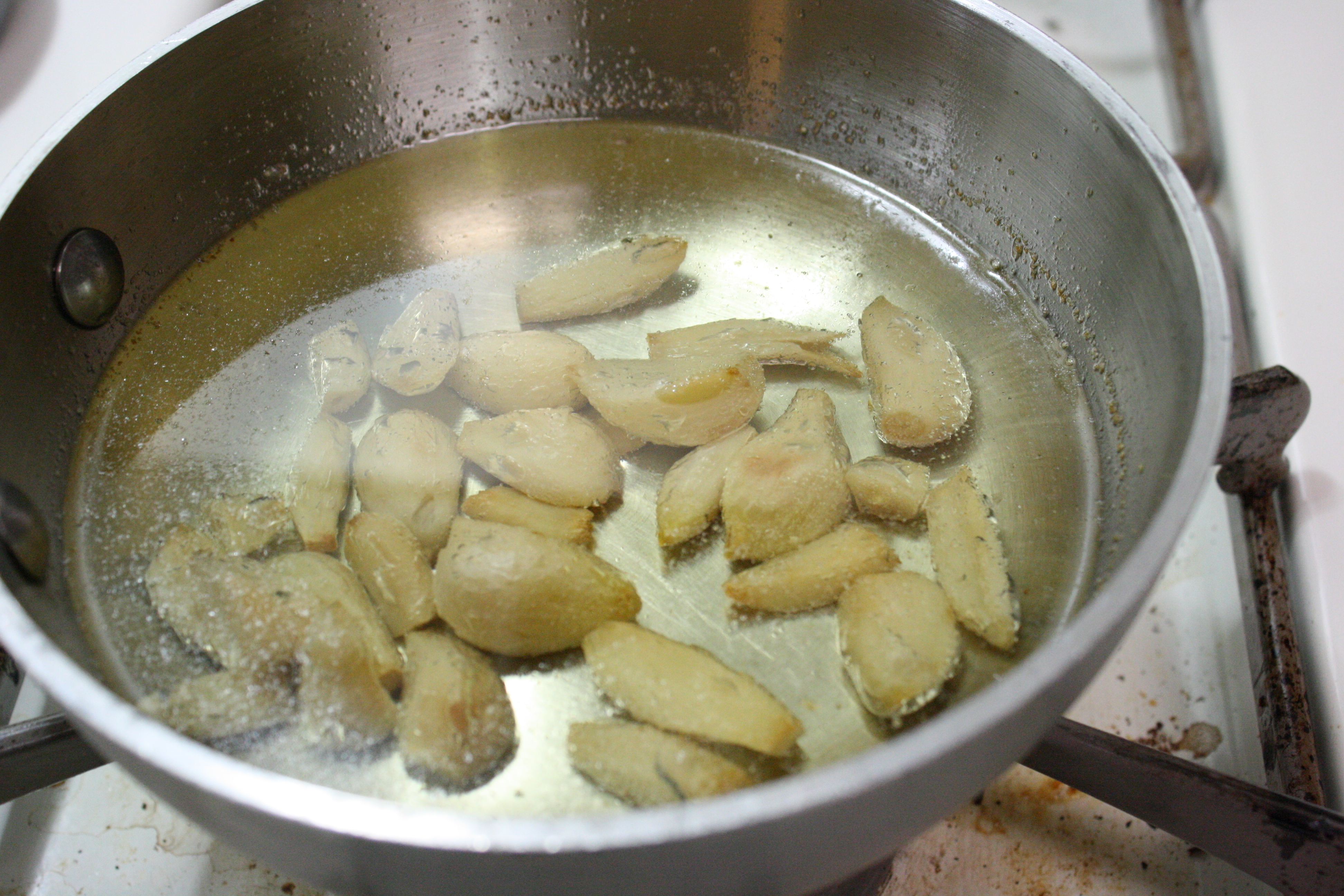 Let the oil and the cloves cool completely, then transfer to a storage container. I poked at my cloves a lot during the cooking process, and also stirred a bit, which is why I think you see some garlic residue on the surface here. It didn’t bother me, but if you wanted, you could always strain this through cheesecloth. You can keep this in the fridge for several weeks!