Thoughts from this week 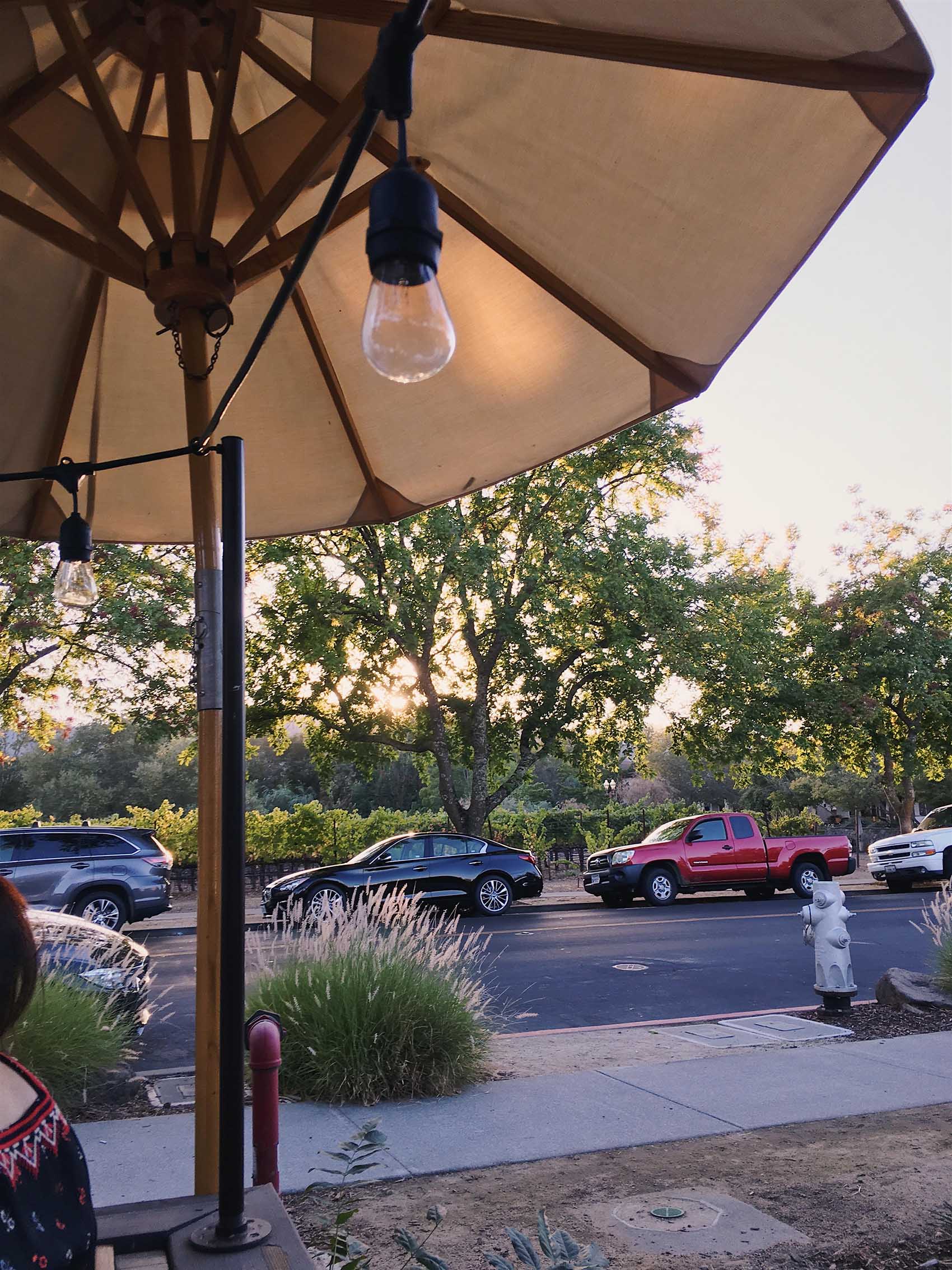 It’s been a really weird, sad week. Last Saturday, Joe and I spent the entire day up in Napa, getting out of our own heads and trading our to do lists for the sunshine and the energy of the harvest season. It’s a really special time in the valley, as grapes are coming in, the vintage takes shape, and things also begin to transition to the quieter winter season. I took the above picture when we were at dinner Saturday night, having no intention of ever posting it anywhere. Sometimes — and this happens frequently when I’m in wine country — I snap pics just to remember the moment, the feeling. I’m often trying to capture the light, which is so special up there. It has a warmth and beauty to it that I used to daydream about when we lived on the east coast. It’s peaceful and gentle, and I really treasure it.

Here in SF, we always sleep with our windows open, because most homes in the Bay Area don’t have central air, and for the vast majority of the year, you can do so because the climate is mild and cool. Late after we went to bed Sunday, I woke up confused, as the apartment smelled faintly of smoke. Assuming someone must be smoking under our window, I fell back asleep. Hours later, Joe got up to shut the windows when the bedroom smelled as if we’d been burning a camp fire indoors, and said something about there being a fire in Napa. That didn’t make any sense, I thought groggily — we were just there!

To say that what’s happened throughout all of Northern California this week has been devastating, surreal, and just plain awful is a huge understatement. As I check in on the news each day, it seems like some bad dream that all this is happening an hour north of here. It doesn’t feel real. Of course, my own feelings about the fires pale in comparison to the loss, grief, and heartbreak experienced by those who have lost their family, friends, pets, homes, or livelihoods. I can’t even pretend to imagine what that must be like right now, and how terrifying this week has been.

Two nights ago, I was feeling really sad about the state of basically everything. Watching and reading the news has become an exercise in pain tolerance; everyday, it feels like some new, awful headline breaks whether close to home or far from it. Up until now, I’ve been pretty good at refocusing my energy — mostly towards work, of which I feel like I’ve been a damn maniac lately (this is probably because psychologically, I’ve fooled myself into thinking it’s the one thing I can control). But Wednesday night, everything just felt really bad. Not to be a total downer, but I felt helpless and a little hopeless.

The world has been so upside down this year in a lot of different ways, and escaping out of the city feels like this one, peaceful, simple respite we have from all the things that make life feel heavy — whether it’s a stressful week at work, a bad week of headlines, or needing to decompress. Sometimes we’ll even drive up for lunch somewhere, simply to get out of the city and enjoy the countryside. I remember when we lived in New York, how much we’d yearn for that escape. It’s why we flew all the way across the country for Joe’s 30th birthday one year (in a very memorable 24 hours of travel due to blizzards and polar vortexes), and why it’s the first place we went once we moved back and were waiting for the keys to our apartment. Maybe this place is like our bubble, a safe haven. As I said to Joe on Wednesday, after months of bad news stories and sad things happening, the fires feel like the shitty cherry on top. This place that brings joy and simple pleasures and happy memories to so many people was also touched by something so terrible. The symbolism was/is cruel. I dunno. That, on top of the already indescribable destruction and level of loss just made me really sad to think about. And with friends and old colleagues who work in the wine industry, it’s heartbreaking to think about the impact this will have for years to come. The whole thing is shocking to the core and awful.

Well, now that I’ve bummed everybody out on a Friday, here’s one thing I’ve taken from this week (and you know me, I like for my essays to have a take away). After we spent some time talking about it Wednesday, I did feel a little bit better. And in reaching out to a friend and former colleague who lives in the area on Facebook, I’ve heard several times how much the overwhelming support and outreach has meant to them. It was a good reminder how much community matters in times like these — through natural disasters, political disasters, and even hard times in your personal life. Reaching out and helping in whatever ways you can (and just talking about what’s happening) forges bonds between us that are incredibly strong. There are signs up around Sonoma right now that read “the love in the air is thicker than the smoke.” Someone is printing them and hanging them, simply to do their part and help bring the community together. It’s pretty cool that even in the worst of times, how much the smallest act, the simplest efforts to bind people together, can lift the spirits.

Thanks for letting me write about this here today. Like I said, it’s been a weird week. Even though it’s been quiet around here lately, I treasure this space so much. Here’s wishing you a good, peaceful weekend with people you love!

PS – locals, Eater put together an awesome list of ways to help victims of the fire. It includes info on how many local businesses are organizing to get resources where they’re needed. Check it out! Other than super obvious places like Red Cross, I found the list to be pretty comprehensive when cross referenced with other lists I’ve seen floating around. Three places they didn’t mention are the Sonoma Humane Society, Napa Humane Society and SF SPCA. All three need donations to help with animals who’ve been displaced or have burn injuries. Joe told me that a bunch of little guys who’d been relocated up here because of Hurricane Harvey all have to be relocated again, which just about broke my heart. Ahh! Now I’m ending on a sad note. Ok, here’s one more cool way to help that’s uplifting: my friend Cynthia has organized a lasagna making drive today. It’s super last minute, but hit her up here if you would like to volunteer your time to make mass amounts of lasagna in North Beach this afternoon. The lasagnas will go to families who have been affected by the fires.