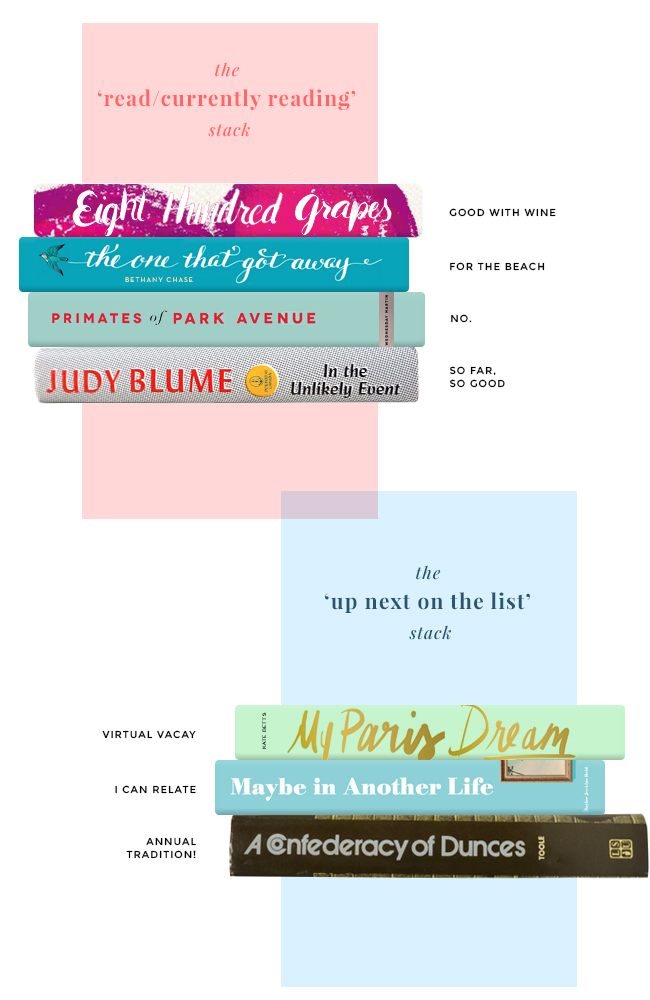 I definitely haven’t been on the Kindle as much as I would’ve liked this summer, but I’ve still managed to make my way through a few books. Am I alone in wanting to read a lot of fun, easy books in the summer time? There’s certainly a reason they’re called beach reads, that’s for sure.

Most recently, I’ve finished Eight Hundred Grapes, The One That Got Away, Primates of Park Avenue, and I’m currently deep into In the Unlikely Event. Here are my thoughts on them:

Eight Hundred Grapes: This is a fun little book about love, family, family secrets, and of course wine. Set on a vineyard in Sebastopol (which is up in Sonoma), this was a perfect first read for the summer, when we were settling back into the Bay Area and all I wanted to do was go to wine country every weekend. The story begins when the main character, Georgia Ford (what a name!), discovers a secret her fiancé has been keeping from her, then hightails it back to her family’s vineyard and winery to find solace. Except, family drama ensues. There are a lot of stories within the story, all of them good, and I ultimately enjoyed this book. Here’s hoping it becomes a Nancy Meyers movie.  Order it here

The One That Got Away: I was sent this book as part of a Talbots summer promotion (random, but kinda fun!). To be honest, it’s the type of book I would’ve never purchased for myself had I seen it in a store, but I was interested in the fact that it was set in Austin, my hometown. The story is pretty Lifetime worthy and predictable (creative female architect’s business is blowing up because she is awesome at what she does; in a long distance relationship with guy who is clearly not right for her; blast from the past enters her life again and she tries to ignore feelings for him), but it was still an easy beach read. It’s funny seeing Austin through other people’s eyes these days — it is so different from when I was growing up there. Order it here

Primates of Park Avenue: Around here I try to subscribe to the whole “if you don’t have something nice to say” rule. But this book has gotten a ton of hype, and I know a lot of people have mentioned wanting to read it, plus I keep seeing it in girlfriends’ Instagram and Snapchat feeds. Can I save you the trouble? This was one of the worst books I’ve read in recent memory. I tried to get into, really I did. But there was no plot, no characters to get behind, no conflict, no resolution. Nothing happened. And most chapters started with these lengthy anthropological analogies between primates and the people the author was trying to understand. It could’ve been interesting, but it just dragged and felt irrelevant. All the poor press aside, I was excited to give this one a chance having just moved from New York. For me, it was a dud. Have you read it? What did you think? Order it here, at your own risk

In the Unlikely Event: I’m deep into this book right now and so far, am really enjoying it. I was a HUGE Judy Blume fan growing up, but oddly enough, have never read any of her novels for adults. This book is character heavy, so you really have to pay attention to small details to follow the many (and I mean many) stories that are interwoven together. But the thing that binds them all is this: In the early 1950s, three airplanes crashed in the town of Elizabeth, NJ within two months of one another. No, really, this is a true story. It’s pretty scary, horrific, and incredible to think about, actually. Getting to know all the characters in this book has been fun, and I’m excited to see where the story goes. Order it here

My Paris Dream: Ok, ok, I know a lot of people have been reading this book. But per usual, right on schedule, I’ve been aching for another trip to France, and since it likely won’t happen this year (we seem to be on an every other year rotation), I’m hoping this will serve as a virtual vacation in the meantime. Order it here

Maybe in Another Life: This book popped in my Amazon ‘Recommendations’ the other day (those always get me…you too?). I thought the concept was interesting — kind of Sliding Doors, but in novel form. In alternating chapters, you see how one woman’s decisions affect her life — what happens if you take path A, versus path B? I think we’ve all wondered what would’ve happened if we’d gone down a different path in life, so I’m excited to see what this book has in store. Order it here

A Confederacy of Dunces: This is technically a book I’ve read before — many times in fact. The first time I ever read it was during spring break of my senior year of high school. I try to read it once a year, often in the summertime, when I take immense pleasure in opening my now very well-worn hardcopy. It’s the most hilarious book I’ve ever read in my life, which is also a tragedy, since it is the only work that John Kennedy Toole ever wrote. This book could serve as my litmus test for people…if you think it’s funny, we can probably be buddies. I got Joe to read A Confederacy years ago and he’s now read it several times too — it’s been the source of a lot of inside jokes in our marriage! Order it here

In other literary news, I read like 5 pages each of this book and this one too, then got distracted by other reads (ooh, shiny new object!). All in good time, right? What’s been on your summer reading list? What did you love, and what did you hate?

Book spine graphics all created by Victoria McGinley, with the exception of the In the Unlikely Event and A Confederacy of Dunces spines.