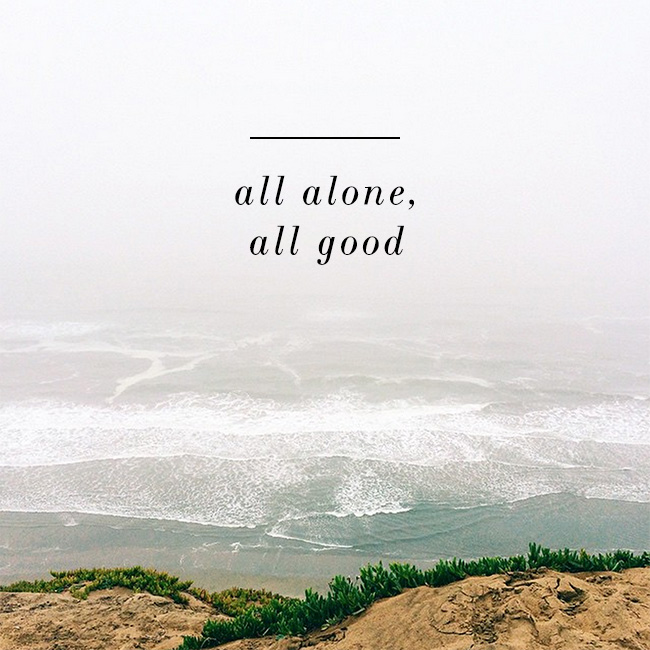 Twice in the last two weeks, there’ve been rogue mosquitos that have made their way into our bedroom through an open window during the night. They’ve been aggressive little things, usually waking me after my shoulders, chest, and arms have been roundly bitten, and they’ve completed a few requisite dive bombs at the face (if the itching doesn’t wake me, it’s the buzzing right in my ear). Mosquitos in cool-weather San Francisco: whoda thunk?

But I bring it up because this very morning, on the heels of another attack — and two lights-on attempts to kill the f*!$er were unsuccessful — I got up from bed and wandered into my office. It was just after 4 in the morning. Not being able to sleep, I had no real agenda, but thought I might write, or put a post together. Nothing really came.

So I sat some more, and after a while, it struck me how peaceful it was. My little desk lamp, the only one glowing from the many apartment windows I could see. How quiet it was outside. It was nice to sit with no distractions, no real urgency, no where to be, nothing to do. Just me and my thoughts, casually bouncing from one to the next. Alone.

This past weekend, Joe spent most all of Saturday out and about playing golf and hanging with his buddies. It had been a while since he’d been out for the entire day doing his own thing, and on the flip side, a while since I’d had the house to myself during non-work hours, with no other plans on the books. I watched three movies, made myself something delicious for lunch, and didn’t even change out of my pajamas until dinner time. It was amazing. Don’t you love days like that?

All this to illustrate, I think I often forget how valuable and necessary alone time is. Even if solitude is spent doing something mindless — like watching three movies you’ve already seen a bagillion times, just because they make you feel good — it’s still such a gift. Somewhere between all the work commitments, relationship commitments, and friend commitments, it’s pretty easy to leave out the you commitment. That part where you take time to do nothing and/or something that makes you feel great, just because you need it and you want to. Do you forget to do this too? It’s one of those things that’s often on the back burner in my mind (like, “Oh, I really want to just take a bath and read a book and do nothing”), but rarely gets moved to the front burner.

What’s your favorite way to unwind when you have true alone time? I have two, and well, one is the version that actually happens and the other is the one that I always say I want to do and it never seems to happen. The first was basically this last Saturday. I have a not-so-secret love of watching the same movies over and over again, but can really only indulge in this on my own (Joe draws the line after annual holiday movie watchings). I also use the time to make carb-heavy delights that result in leftovers. Pasta. Casseroles. It’s amazing, y’all.

The second is the daydream in which I eat lunch by myself in some cute little restaurant I’ve never been to, then spend the afternoon browsing boutiques and shops that I’ve walked by but never actually gone into. You know that daydream. It’s a good one, isn’t it?

You will notice that the Alone Time principle is a close relative to the Secret Single Behavior. But they’re not quite the same. Because with Alone Time, I think to do it regularly you kinda have to plan for it and give into the self-indulgence, if that makes any sense. It’s something that should be intentionally  carved out (I really did accidentally type that) of your schedule for your own sanity and well-being.

Joe is taking a last minute trip to see family this coming weekend. We didn’t have any major plans for the Fourth anyway, but when he told me about the trip, I was sad about not spending the long weekend together for about a minute, then realized it was a great opportunity to indulge in some much needed alone time. Work’s been busy and since coming back to SF, we’ve kept a full social calendar as we “make up for lost time” with friends we’d missed. So yes, alone time: I see you on the horizon, and I’m coming for ya. I’m already scheming about the casserole I’m going to make. And I just might actually do that solo lunch and shopping excursion, finally. Now I have you guys to help keep me accountable.

Do you get in enough time for yourself to just do nothing, or things that revitalize you? And I’m not talking about your regular/habitual tasks that you happen to be alone for (like going for a run/working out, or running errands or something). How do you know when you need one of those days off from everyone and everything, and what do you then like to do?