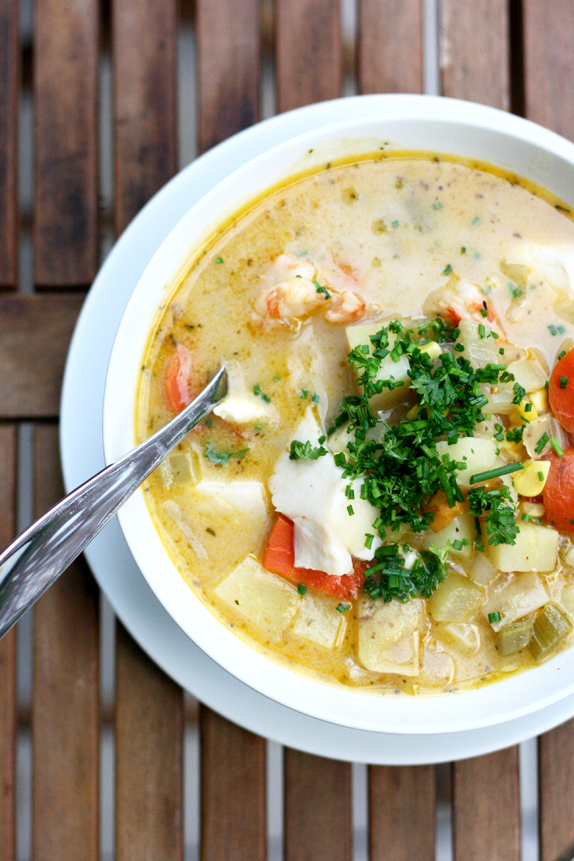 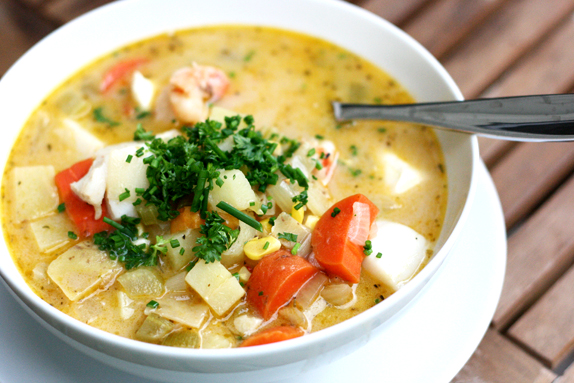 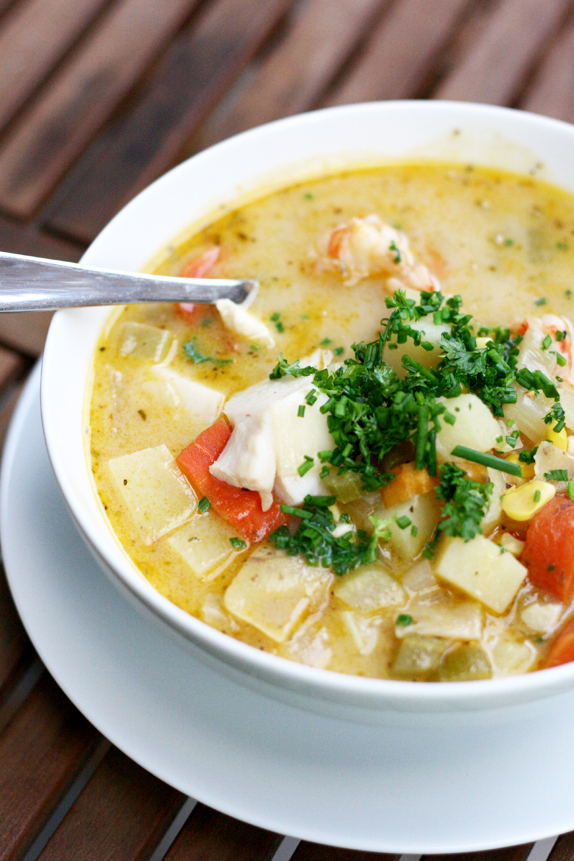 I think if I could only eat seafood and vegetables for the rest of my life, I could definitely make it work. I just adore fresh fish and shellfish. There’s something about it that feels special and luxurious, no matter the occasion at a restaurant or how might be preparing it at home. Granted, depending on the seafood it can sometimes be a little pricey, which is why I save dishes like this Seafood Chowder for a special treat. It’s based off a wonderful recipe from (who else?) Ina Garten, and I love how fresh and elegant it tastes versus its more ubiquitous, creamy, and — meh — gloppy counterparts. I mean, don’t get me wrong, the classic white New England clam chowder can be a thing of beauty, but I think it’s rare to find a truly great one, and most of the time, they’re so rich they just make my stomach hurt.

Ina’s version is unique in that it doesn’t have a purely dairy base, so it feels lighter while you eat it (I say feels because, let’s be honest, this recipe still calls for LOTS of butter and a touch of cream!). I built off her base recipe and added in additional flavorings, such as fennel, herbes de provence, white wine, and lemon — I think it gave the chowder a little southern French touch. We cooked up a batch of this on the Fourth, and despite the French flavorings, I thought it was deeply patriotic. For while the dish has its origins on the western coast of France, it was extremely popular during colonial American times, what with the abundance of seafood on the east coast (if you want to food-nerd out, check out this article on the history of chowder).

History lessons aside, if you love seafood, I promise you will love this chowder. I’m already scheming up another “special occasion” so that I can splurge and make it again! Here’s what you do:

What you do:
In a large, heavy bottomed pot or Dutch oven, melt the stick of butter over medium heat. Once melted, add in all the vegetables: the fennel, onion, carrots, potato, celery, garlic and corn. Cook for 7-10 minutes, until the onion is very softened and translucent, and the potatoes are barely cooked. Sprinkle in the flour and the dried herbs, then stir so that they mix with the butter and vegetables. Cook for about 3 minutes, stirring frequently, until the flour is able to toast a bit.

Pour in the white wine, being sure to scrape the bottom of the pot to release any browned bits. Then, add in the seafood stock. Bring to a slow boil and cook for 10-15 minutes, covered, to allow flavors to come together. Add in the lemon zest and juice, then taste and season the broth with salt and pepper to your liking. Reduce the heat to low, and then gently add in the seafood. You don’t want to vigorously stir the chowder at this point, otherwise you could break up the fish. Just gently fold everything together, and let the seafood cook for 7-10 minutes, uncovered. It’s done when the shrimp turn bright pink and the fish and scallops are firm and springy to the touch. Pour in the heavy cream and gently stir. Finally, taste the broth again and check for seasoning. I found it needed a little splash of white wine vinegar, so that the acidity could balance everything out — but you might like it just fine. Season again with salt and pepper as needed.

Ladle the chowder into big bowls, and garnish with chopped chives and parsley. Serve with good crusty bread and white wine!

Note: many premium grocery stores will carry homemade seafood stock near the fish counter. If you can’t find it, you can use boxed; the Kitchen Basics brand is a good bet (look for the blue box).