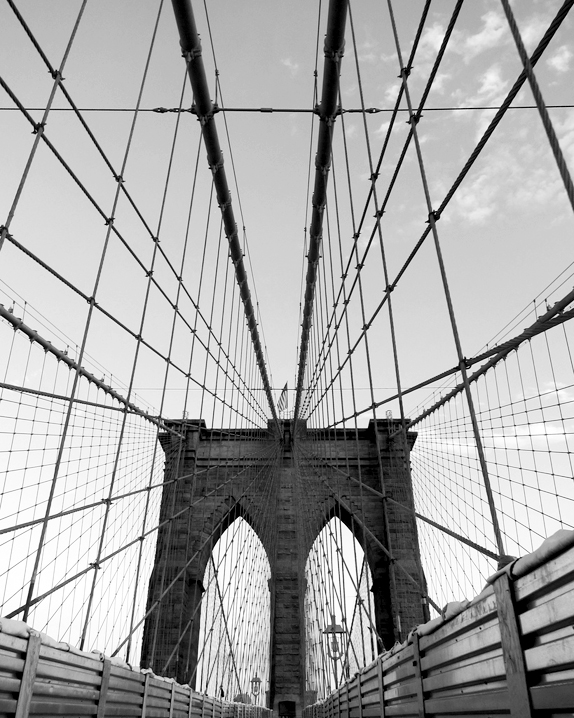 Can you believe that’s the title of this post?? One year. Both the longest and shortest of my life. Okay, so officially, our one year New York-iversary is this coming Sunday, but in the grand tradition of Wednesday Real Life columns, I thought I’d chat about it today.

I was thinking about this quote I once saw somewhere that said something along the lines of, “Someday, this moment will just be another story.” I think that pretty accurately sums up where we were a year ago. We were about to move into a hotel, didn’t know if the apartment we wanted would pan out, and had no idea we’d end up in an emergency sublet situation for much of the summer. I’ll be honest, living through all that was miserable, but enough time has passed that now we can look back and laugh (if not shake our heads a little) at what a rough transition we had to New York City. First the move, then the winter. Oy. I’ve been told by many New Yorkers that this past winter was one for the record books, but here’s the funny thing: having never experienced a winter at all, really, I had nothing to compare it to. So in my mind, it was just a “normal” winter (albeit an extraordinarily cold one).

I found it kind of hard to write a coherent essay about what the last year has been like, so list form seemed like the way to go. Here’s my take on our first year in Manhattan:

BEST MEAL I’VE HAD IN THE CITY:

Marea. We celebrated two big occasions there, and for me, nothing beats an order of Ricci (crostini with sea urchin roe and a gossamer thin strip of lardo draped over the top, then torched so it melts slightly and becomes translucent). Second place goes to (embarrassingly enough) Hillstone, which I have no shame about loving endlessly. Always have, always will; I don’t care that I can eat at one in SF, LA and beyond. It’s just so good!

FAVORITE PLACE I’VE BEEN FOR DRINKS:

Late last summer, my friend Katherine took me to The Rose Bar at the Gramercy Park Hotel. I don’t know what it is, but I just fell in love with this little spot. The cocktails are always delicious, and I love walking out of the hotel and making a lap around Gramercy Park afterwards. The artwork and decor in the Rose Bar is very Spanish Inquisition meets Pablo Picasso’s bohemian den; it’s funky, a little sexy, and in my mind, very New York. 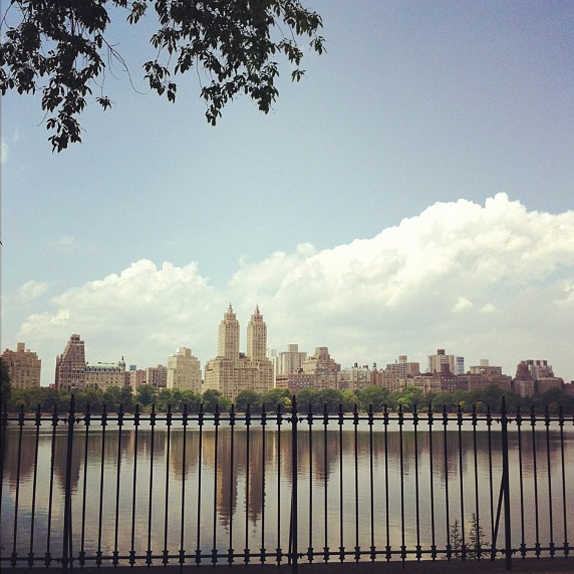 THING I WOULD MISS THE MOST IF I MOVED:

The rain. Joe was the first to comment on the fact that in spring and summer, the rain here is warm. That is not something we really experienced in northern California, where rain is COLD. We like the warm rain so much that just the other day, we ran through it together sans umbrella (it was cute and romantic).

TRUEST THING I’VE EVER HEARD ANYONE SAY ABOUT NEW YORK:

This was said to me by a woman I often see in the park, walking her Frenchie (who Lucy is friends with!). She had just returned from a trip to SF with her family, and was telling me about how relaxing it was, especially compared to NY. “It’s amazing,” she said, “I forgot what it feels like to be truly rested, and relaxed. Being here, you’re always fighting.” It’s totally true. In NY, people are fighting to get on and off the subway, to get a better job, to get a cab, to get noticed. It’s exhilarating, and it’s also exhausting. 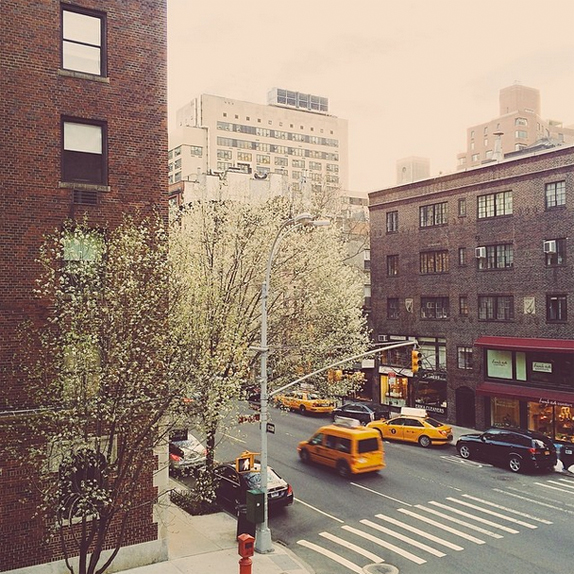 I like the UES (it’s clean and less chaotic), and Flatiron/Gramercy a lot.

PLACES I LIKE TO VISIT THAT NEVER GET OLD: 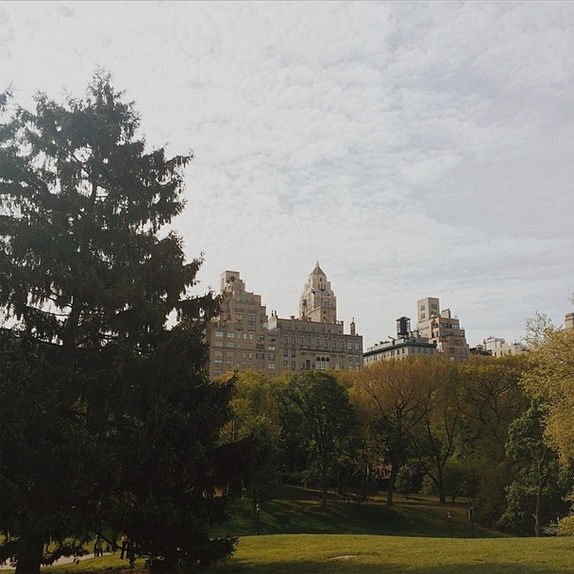 MOST EXPENSIVE CAB RIDE TO DATE:

Other than those to the airport…UES to Tribeca, 6:30pm, nearly $40 (what were we thinking?)

BEST DEAL ON A CAB RIDE TO DATE:

UES to Greenwich Village, 6pm, in a raging thunderstorm, $20 (a gypsy cab driver did NOT know how to negotiate) 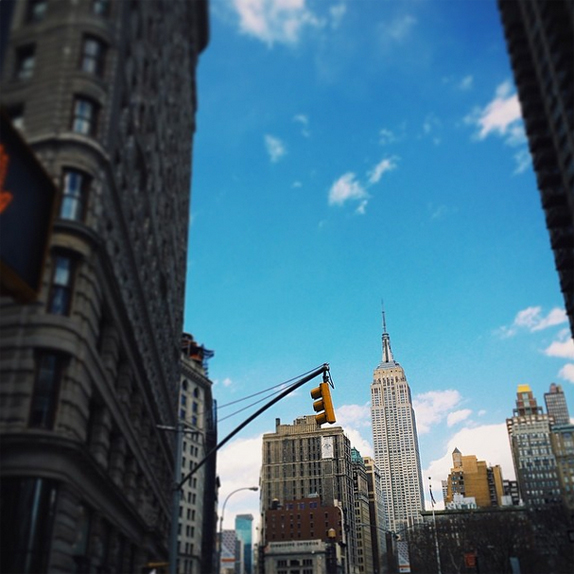 I know I’ve seen some weird shiz, but I always seem to forget about it because I’m only phased by it for like half a second before moving on. If you live in New York, feel free to share your story below — I’m sure that’ll jump start some weird ass memories. This isn’t so much weird as it is just the randomness of living in New York, but I didn’t meet our lone neighbor until about 6 months after moving in. We never saw her, never ran into her, nothing. Finally, one day right before Christmas, we ran into her as we were leaving our apartment. Introduced ourselves, that was it. Just this week, Joe saw her again, got to talking, and discovered she also went to USC (like the both of us). And she was there at the same time as us. What are the odds? I was very amused that out of all the buildings in New York, our little building with its two units ended up housing all USC grads.

1 on a sidewalk; at least 5 more if you count all the people who live in the co-op across the street from me and don’t have any kind of window coverings on their bathrooms. Also, one inadvertent event involving ME, when I was changing clothes in my bedroom the week after we moved in, and some construction guys saw me as naked as the day I was born. File that one under “Moments I wish I’d opted for Overnight Shipping on the Curtains We’d Ordered” (um, hopefully that file stays small). 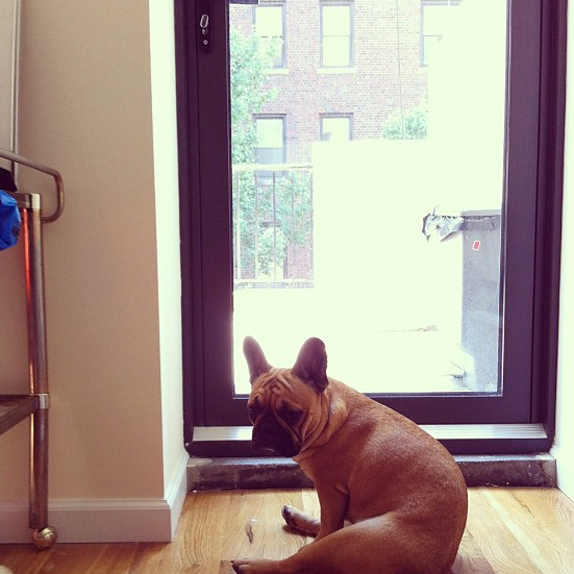 MOST AWKWARD SUBWAY EXPERIENCE TO DATE:

It’s not even that scandalous, BUT…it was just so awkward… When a woman I was standing next to and a gentleman seated right in front of her got in a literal screaming match because she had accidentally stepped on his foot during rush hour. The entire car went silent as they duked it out verbally and began calling each other all kinds of very inappropriate (read: racially insensitive and misogynistic) names. They tried to get me involved to serve as referee as to who was in the right. I pretended I had ear buds in, even though I didn’t. Just look ahead, and don’t make eye contact, people.

Joe really, really hated the winter. He likes to recount his misery of stepping in 8″ deep puddles of dirty, slushy water at street corners, because he’d always mistake them for frozen patches of ice. And, how here on the UES, the streets weren’t plowed as much (did you hear about this?), so residents took those plastic street barricades to form bridges over said slush puddles. I never saw this, but he remains deeply amused by it. 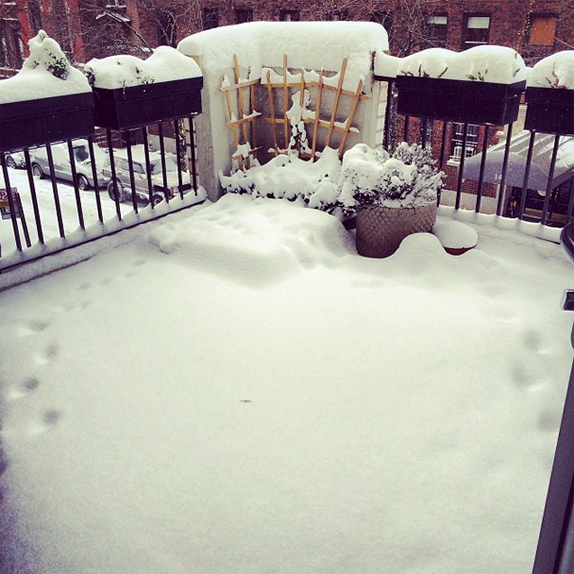 Online. How about that? You move to the city with the greatest opportunities for retail therapy in the U.S., and you end up buying everything online. This is one of the ironies of living in New York.

PLACES WE ORDER FROM THE MOST ON SEAMLESS: 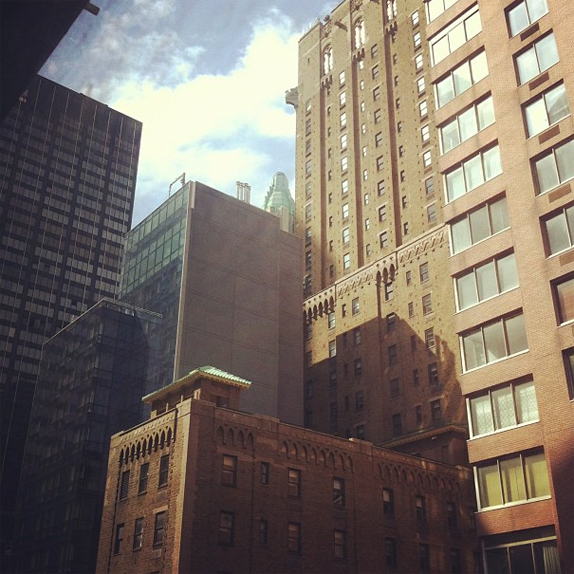 THING THAT ANNOYS ME THE MOST ABOUT LIVING IN NEW YORK:

How deceptively inconvenient everything is. This city is touted as being among the most convenient, but really, I think it’s the opposite. For example, on paper, the idea of having groceries delivered to you is highly convenient (and practical, since if you buy a bunch of stuff, you have to have someone with you to help you catch and load it into a cab). However, once you’ve settled on delivery, you’re then handcuffed to your apartment until the sundries arrive — and even though most markets give time windows, I’ve never had them be on time, ever. If we order groceries from Whole Foods, we typically have to block out an entire weekend day to wait for them to arrive (which is why we started doing a lot more smaller trips to the farmers market, which saves us the waiting time, but is still inconvenient, because it’s not exactly close to us). I guess this is why some people look for doorman buildings. But I’ll never agree with people who say this city is “convenient”, because honestly, getting in my car and driving to run my own errands will always be infinitely less stressful than it is to order anything online and worry about missing the delivery guy. And yes, we’ve tried FreshDirect. I was underwhelmed by the produce.

Note that my complaints about quality produce availability and grocery delivery are probably not that common, because as I have also discovered, many, many New Yorkers do not really cook at home.

THE THING THAT I LOVE THE MOST ABOUT LIVING IN NEW YORK:

It’s much, much bigger than you. And it doesn’t care. Both of those things sound so fatalistic, but to me, they’re reassuring. Let me explain.

Last year in late April, when we visited the city to look for an apartment, the tulips were in full bloom everywhere. There are many sidewalk planters in this city, but most notable are the huge plantings of tulips that pop up in the median running down Park Avenue. You can’t miss these tulips. They’re among the biggest I’ve ever seen in my life, and deeply saturated in color. Just stunning. Last year when I saw the tulips in between apartment hunting, I thought, “Oh, how pretty.” And that was it — I didn’t give them another thought. This year, when they popped up again, I was reminded of how much has changed and happened in our lives since they made their appearance last year. And just like last year, they’ll eventually wither away and die, and then it will be hot in the summer and muggy in the subways, and people will picnic in Central Park again and bask in the heat. And in the fall, the leaves will change, the city will flood with people returning from the summer, and eventually, evergreen trees will be planted where the tulips once grew. Snow will fall; people will step in slush puddles and wait for spring, and then, one warm-ish day, the tulips will appear again. All of this will happen, year after year, because New York just goes on. It doesn’t give a f**k. I think about all the people in this city who were born, who died, who arrived here, who moved away from here, who got married, got divorced, got fired, got hired, made new friends, or learned something about themselves in the last year. New York doesn’t care. It will always return, it will always keep on. It’s kind of neat to be a part of that, even in the most minuscule way, and even for the briefest moment in time. And more often than not, it’s the realest reality check one could have — YOU are not significant, you’re just part of the thing, and that’s what’s significant. It’s something that’s really hard to explain, unless you’ve lived here.

And on that note, we’ll see where the next year takes us!

Past New York Observations and Adventures:

On Moving and Life

Around Here (A Summertime Photo Diary)

When we got the apartment

“Brooklyn Bridge” by Schizoform; used under Creative Commons license 2.0, with some modifications made by me. All other images via my Instagram.