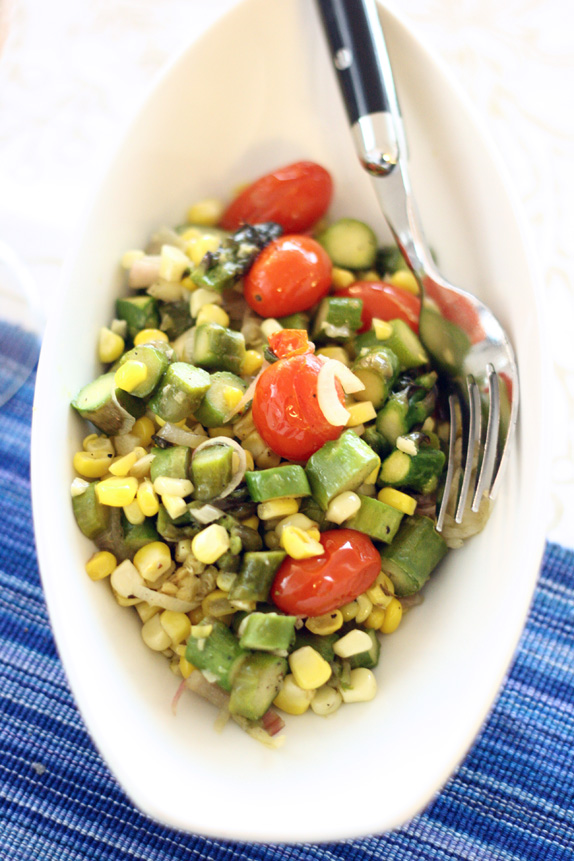 When’s the last time you heard the word ‘succotash?’ When a cartoon character was saying the word, ‘sufferin’ before it? Or never? It’s one of my favorite words, not only because it’s kind of fun to say, but it includes one of my favorite summer vegetables: corn.

Technically (and depending on who you ask and in what part of the country), a succotash is a dish that consists mostly of corn kernels and some type of bean. In Texas, where I grew up, that bean was always the humble lima. While I do enjoy lima beans every now and again, earlier this week, I decided to take advantage of some seriously good looking asparagus and use that in place of any legumes.

The thing I love about this recipe is that 1) it’s about as simple as you can get, and 2) it’s a great jumping off point to add lots of other ingredients or come up with plenty of delish pairings. For example, hot out of the oven (yes, I roasted it!), this would taste amazing with some goat cheese swirled in. You can serve it as a hot side dish, like we did with a roasted chicken, but it would also taste good on top of a salad, or even mixed with noodles and vinaigrette for a cold pasta salad at a summer picnic. You could add shredded chicken to the mixture for a one dish meal, or serve it cold on its own as a snack.

Hungry yet? Here’s what you do: 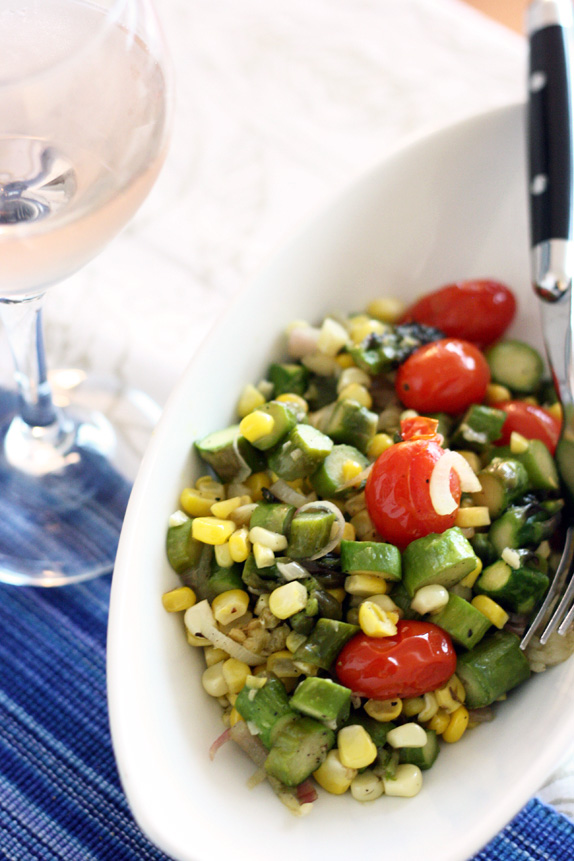 Preheat your oven to 425Â°. In a medium baking dish or roasting pan, combine all of the vegetables, the olive oil, and the salt and pepper. Using your hands, toss to coat and ensure the oil is evenly distributed. Depending on the size of your asparagus and corn cobs, add a little more oil if needed.

Roast the vegetables in the oven for 20-30 minutes, or until the asparagus is tender and the cherry tomatoes have slightly burst. Depending on your oven, it may take a little shorter or longer (in our new sublet apartment, the oven runs a little cold, so it took longer!). You mostly just want the vegetables to all be tender and the flavors to come together.

Remove from the oven and drizzle the juice of the lemon half over the top of the mixture. Stir to combine and serve. I added in a little sprinkling of freshly grated parmesan cheese, but thought it would’ve tasted awesome with goat cheese melted in, which would almost make a sauce to bind the veggies. SO GOOD!