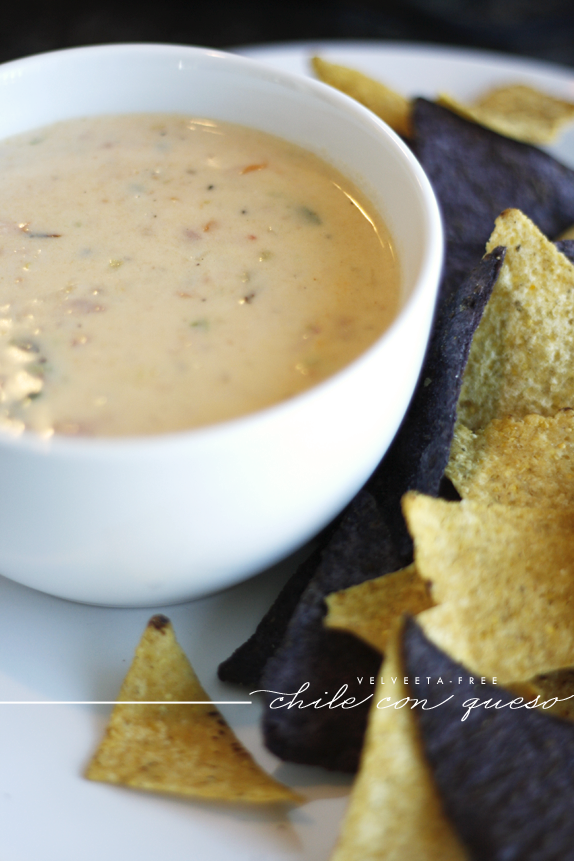 You know that saying, “You can take the girl out of the place, but you can’t take the place out of the girl?” For me, “the place” is Texas. Like it or not, when you grow up in the Lone Star State, certain things just stay with you. This is true even after living in California for ten and a half years (oh my god, I can’t believe it’s been that long). There are a few things I still do that raise eyebrows here on the west coast and make people wonder just where I grew up. One is use of the word “y’all.” Sometimes I’m conscious of it, and won’t let it slip out; other times, it just flows right from my mouth. Another thing I simply can’t let go of is my undying love for Tex-Mex food, which you basically cannot find out here. When I moved from Austin to Los Angeles, it took me a long time to realize that the Mexican food I had grown up with was in fact not Mexican at all, but instead, a cheesy, saucy, completely unhealthy genre of awesome that really only existed in Tejas. 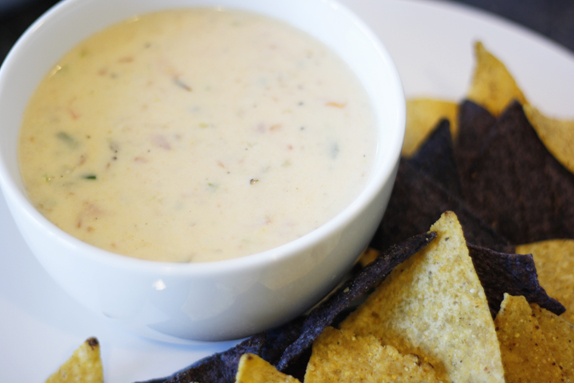 Chile con Queso, or “queso” as it’s usually called by Texans in the know (read: all of us) is about as Tex-Mex as you can get. It’s ubiquitous, in fact — on every single Mexican restaurant menu in Texas, it seems like. What is it exactly? The direct translation is “cheese with chiles” and that’s 50% true. Because in Texas, it’s typically made from melted Velveeta and a can of Rotel, which is a mixture of diced tomatoes and green chiles. It’s kind of gross to think how much of this stuff I ate growing up. Somewhere in the last few years, as the farmers market-loving, go-organic, eat-local San Francisco influence took hold, it became a lot harder for me to stomach that orange-y processed cheese that can sit on grocery store shelves for an untold number of years. But sometimes, a Texas gal just gets a craving for queso, so this past weekend, for playoff game snacks, I decided to do a little research and see if I could make a version with only real cheese and no Velveeta.

The result? Mostly successful. I think it might be hard to replicate the exact flavor of classic chile con queso, but this dip came pretty darn close. And, I love that while it’s indulgent and totally not healthy, at least it’s not made from plasticky cheese. I adapted the recipe from Homesick Texan, and modified it so that I could keep it warm in a slow cooker. You could totally bust this out for the Super Bowl two weekends from now! Here’s what to do: 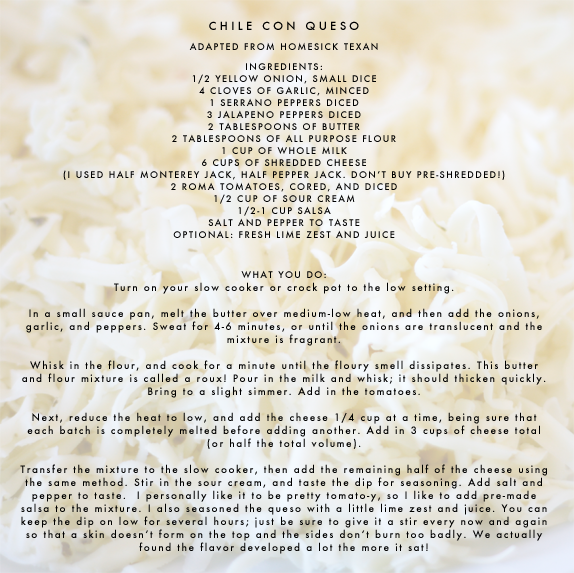