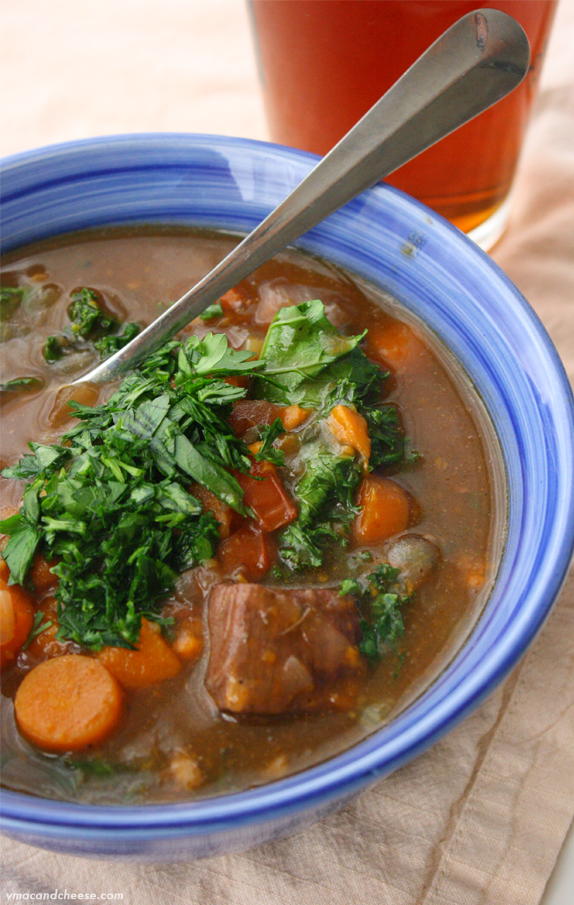 That St. Patrick’s Day party we had? Yeeeeah…we have a lot of beer left over. Specifically, Guinness. Hosting that party felt like those holiday commercials from the 90s, when everyone shows up on your doorstep with green bean casserole or Stove Top stuffing or whatever. Replace the stuffing with cold Guinness, and you have our party. It was hilarious, but now with a fridge full of stout, I’m working on ways to get rid of it that don’t necessarily include drinking it.

This last weekend the weather was pretty miserable, so on Saturday morning I told Joe that in celebration of Mad Men‘s return Sunday night, I’d make us a “traditional” Sunday meal of beef stew. It was the perfect excuse to cook from our beer stock, and also use up some leftover vegetables we had hanging around.

I basically followed this recipe with a few simple modifications. I increased the amount of Guinness and red wine (which if you ask me, just made things richer!), and instead of Russets, used orange sweet potatoes. I also threw in a bunch of chopped celery (I can’t stand eating it raw, so this was a good use of leftover stalks from the party), and two bunches of greens — chard and lacinto kale, specifically. The greenery made an otherwise, rich, hearty stew feel a tiny bit lighter, or at the very least, definitely healthier. At the end of cooking, I also mixed in a little bit of cornstarch slurry , to thicken the stew. Totally cheating, yes. If you didn’t want to use cornstarch (I must admit I don’t totally love the texture), you could dust the stew meat in seasoned flour before browning it to get a similar effect. I just wasn’t thinking ahead.

So, did it make a dent in our beer stock? Well, not really. I used a grand total of one Guinness for the recipe. Looks like I might have to make a batch of Erika’s Guinness brownies!