I was talking with a co-worker the other day about how December is totally a wash. Even though we all have to go to work or school, those few weeks between Thanksgiving and Christmas are definitely not the time of year where I feel most focused or motivated to do anything except cook, eat, and sit at home in my pajamas — maybe with some carols playing in the background. This last week, the weather in San Francisco turned truly wintry, with temperatures cold enough to warrant the use of wool mittens, and big gusts of wind that swirled through your legs, making you brace no matter how long your coat.

The things I like about this time of year? The lights. The decorations found in the most unexpected places. Gift wrapping (it’s the only craft I ever seemed to be any good at). And of course, the eats. Because when it’s cold outside, you have license to eat whatever makes you feel a little bit warmer, even if your gym clothes haven’t seen the light of day in…a while.

That’s the thinking Joe and I have when it comes to making mac ‘n cheese every year with our Thanksgiving meal. I know we’re more than a week past Thanksgiving now (I’ll refer you back to the first paragraph if you’re wondering why I didn’t get around to writing this post earlier in the week), but if ever there was a time of year to curl up with a bowl of creamy, zippy, decadent mac ‘n cheese, this is it. Indulge now. Whatever guilt you have for eating something so deliciously bad can be assuaged when you resolve to exercise more after the new year. Get the recipe after the jump!

Before you start making this mac ‘n cheese, you need to let go. Don’t think about what you’re putting in. Just embrace the love. The other thing I’d suggest is having all of the ingredients ready to go before you start cooking and assembling. It’ll just make things easier.

First, start by making some fresh breadcrumbs. Give some cubed white bread (or any leftover rolls, baguettes, etc) a quick whirl in your food processor or blender. My blender is awesome, so I tend to use that for breadcrumb making. I used one and a half small ciabatta rolls I bought in the bulk section from Whole Foods (the last half I snacked on). Put the crumbs in a little baking dish (I used a pie plate), then toss them with a drizzle of extra virgin olive oil, two cloves of minced garlic, some chopped parsley, and some chopped thyme. Bake this for 10 minutes at 375. You could make the breadcrumb several hours (or even a day) ahead.

Next, it’s sauce time. Oh, and while you’re making the sauce, you might consider getting your heavily salted pasta water up to a rolling boil. You’ll need to have the pasta itself ready or almost ready as you complete the sauce.

For the sauce, heat one quart of whole milk and an onion pique in a medium sauce pan. What the heck is an onion pique? It’s a fancy French thing that is essential for classic bÃ©chamel sauce, which is the base of our sauce today. It sounds fancy, but it’s really easy and adds great, subtle flavors to your sauce. All you gots to do is take a quarter of an onion (leave the root in tact), and stud it with a bay leaf and a clove. You can use the clove like a push pin to attach the bay leaf to the onion. You can heat the milk up a little in advance while you grate your cheeses. Now, let’s get things going. 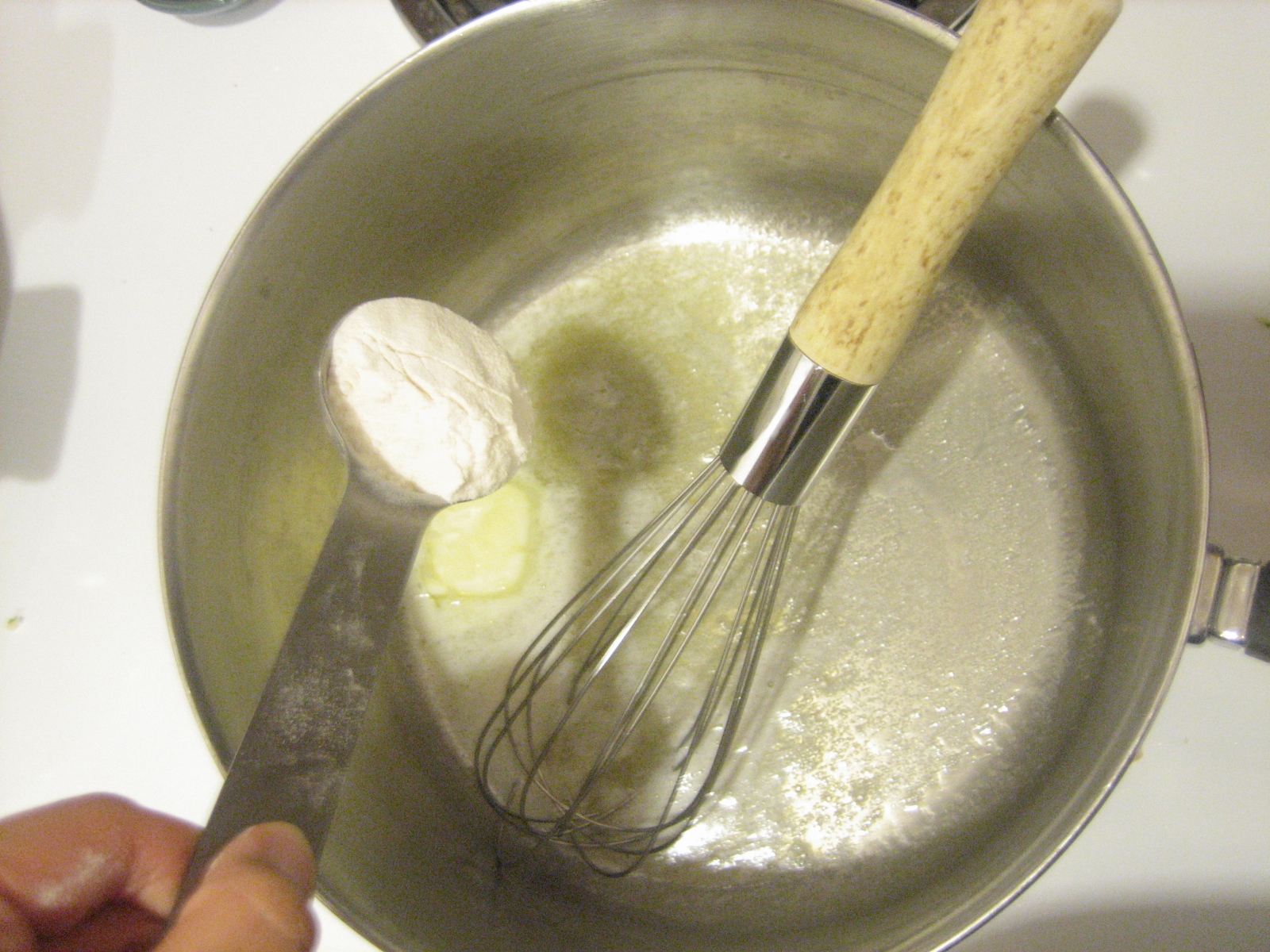 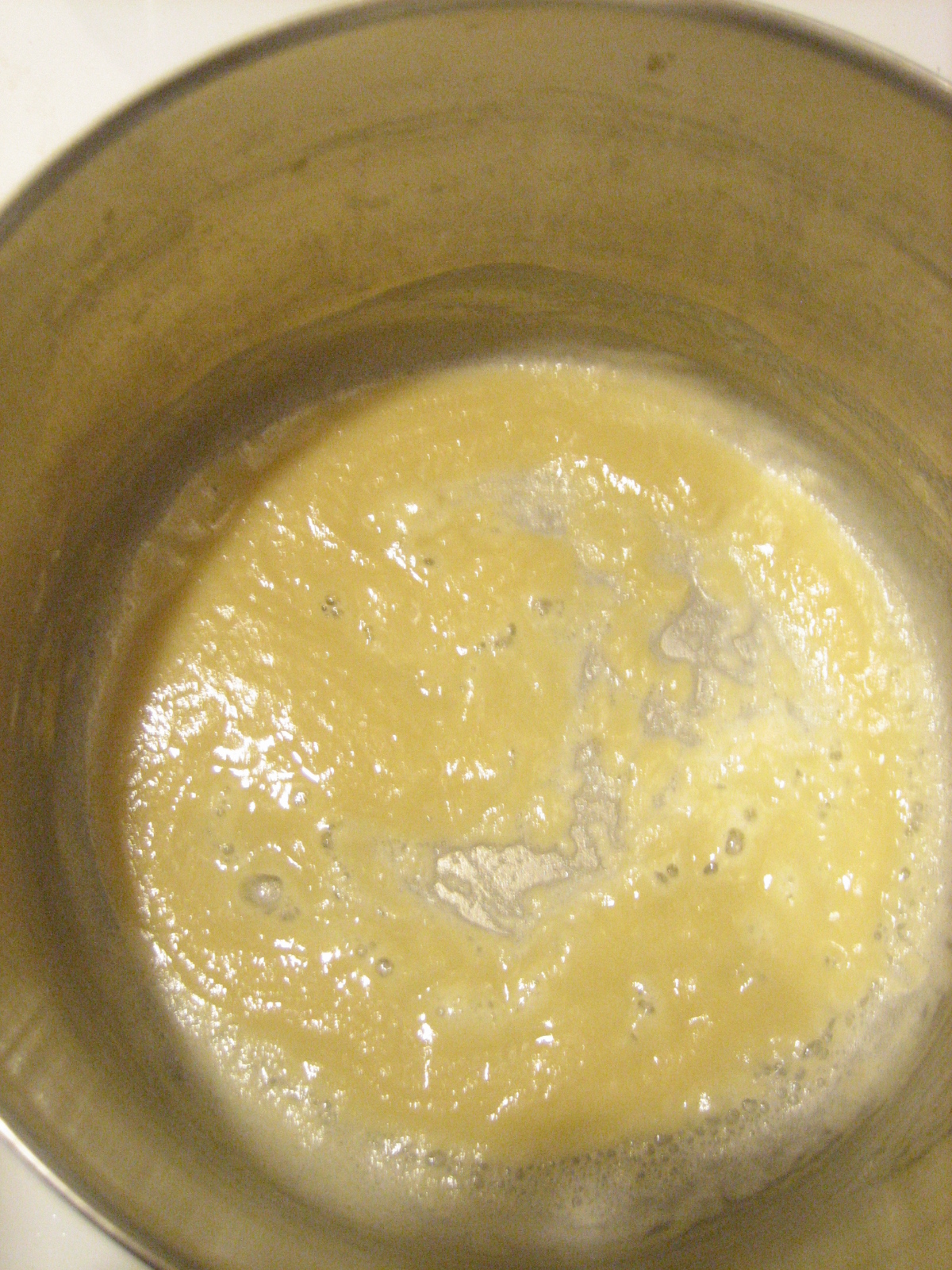 Cook this for about two minutes, until the floury aroma is gone and the roux smells slightly nutty. Then, whisking vigorously, pour in a bit of the heated milk. The sauce should begin to thicken almost immediately, then thin out a bit when you add the full volume of milk. Bring this up to a very gentle simmer simmer — only when it’s at a simmer will the sauce thicken fully. Add in some grated/ground nutmeg, then turn off the heat. Add in all of the cheeses (I used a mix of gruyere, Grafton cheddar, and mild yellow cheddar), season with salt and pepper, and mix until well combined. Next, you can fold in the cooked pasta… And any other extras you want in your mac ‘n cheese. I added bacon, peas, oyster mushrooms and cremini mushrooms. As a general rule, any extras you add in should already be cooked. I cooked my bacon pieces in a pan, then sauteed the mushrooms in the drippings. Sinful, I know. Mercy. I’m drooling again just looking at this. Ok, next, you can do a couple things. If you want something creamy and luscious, you could serve this up and eat this as is. The sauce will be quite oozy and loose all over the plate — but this can sometimes be a good thing. If you want breadcrumbs on top of the mac to provide a nice textural contrast, follow these next steps.

Pour the mac into a baking dish, then top with your prepared breadcrumbs. Bake this at 375Âº until the top is nice and golden. Remember, the longer you bake it, the more the pasta will absorb the sauce. So if you want something a little more saucy and oozy, bake it for less time. If you like a mac that’s a little more casserole like, just bake it for longer.

Out of the oven: Holy mother of mac and cheese! Need I say more?

Here are the recipe details:

Preheat your oven to 375Â°. Cube the rolls into 1-inch sized pieces, then grind in a food processor or blender until they’re crumbs. Toss the crumbs together with the remainder of the ingredients in an ovenproof dish, then bake for 10 minutes. Your kitchen will smell wonderful.

Heat together the whole milk and the onion pique. You do not want to boil or even simmer the milk. It should just be warm.

In a large pot, melt together the butter and flour, whisking until a thick paste is formed. It may remind you of the consistency of wet sand. Stir together to prevent burning, and cook for 2-3 minutes, until the floury aroma is gone and the roux smells nutty. Pour in a bit of the heated milk, whisking constantly to distribute the roux. The mixture should thicken immediately. Pour in the rest of the milk, whisking, whisking, whisking, then let the sauce come up to barely a simmer. Remove from heat.

Whisk in the cheeses, then season to taste.

Put the bacon in a large saute pan and turn the heat up to medium low. You want to cook the bacon slowly, so the fat renders and the meat crisps up. Cook until the bacon is fully cooked through, then remove the bacon pieces to a small bowl.

Have the peas at the ready for final assembly.

Putting it all together

Toss together the cooked pasta with the sauce and extras. Top with breadcrumbs, then bake at 375Â° for about ten minutes, or until the breadcrumbs are nicely browned.

A note about cheeses: The great thing about mac ‘n cheese is that you can use whatever cheese you might like or might compliment your other dishes. I generally like to mix a sharp cheese that packs a punch of flavor with something more mild. Often, the milder, creamier cheeses will melt more easily in the sauce. Using something mild like monterey jack with something nutty like parmesan is a good bet. But the sky’s the limit! I had even bought some blue cheese to use in this mac, but forgot about it in the ‘fridge on Thanksgiving day. Experiment and find your favorites.