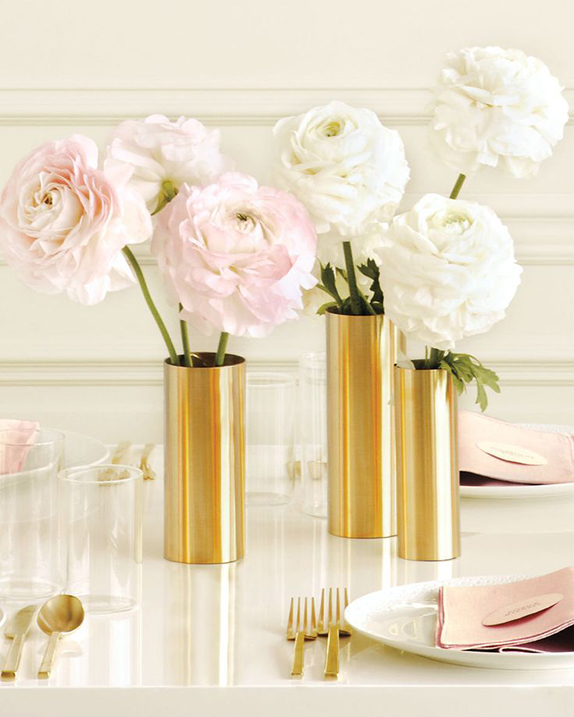 + feel like the week absolutely flew. I really can’t believe it’s Friday…and how quickly Labor Day is approaching! Anyone else feel like they woke up and the week was gone?

+ had a great time on Wednesday night at DreamDry, where my friend Grace was hosting a blowout and DIY crafts event (so fun!). After, I had the best dinner at Almond with Jessica, Hitha, and Julia…so much so that I’m taking the mister back there tonight!

+ finally received my giant pinboard in the mail after it being backordered for a while. We have virtually no other furniture for the office (I know, still), but at least my inspiration wall can start to take shape!

+ downloaded this book after Clara’s recommendation. Really interested to dive in to this one — especially since I may or may not obsessively watch Real Housewives!

+ made banana bread, just because. I’ll share my on the fly recipe next week!

+ love the DIY idea in the photograph above — you take metal rolls of gold and copper and wrap simple vases in them, and just adhere with tape. Genius!

This weekend and next week will be busy ones. Joe and I are starting a new thing called ‘mystery date.’ The idea is one of us will plan a whole night out on Friday, picking a new neighborhood, restaurant, or activity that will help us explore new parts of the city, but the other person has no idea where we’re going or what we’re doing. I’m taking him to Almond tonight (which he already figured out, womp womp), but he still doesn’t know the other parts of our mystery date!

Tomorrow my sister-in-law and nephew are coming over to visit, and Meg is coming up from DC to spend the weekend in NY! Next week, I’ll be in Chicago for a couple days for a work trip…aaand by this time next week, I’ll be ready for a nap.

Hope you guys have a great weekend!