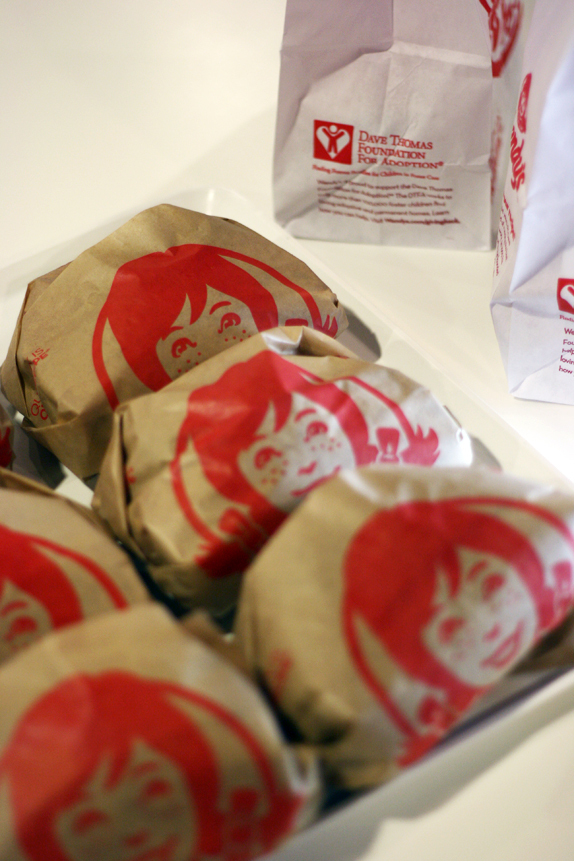 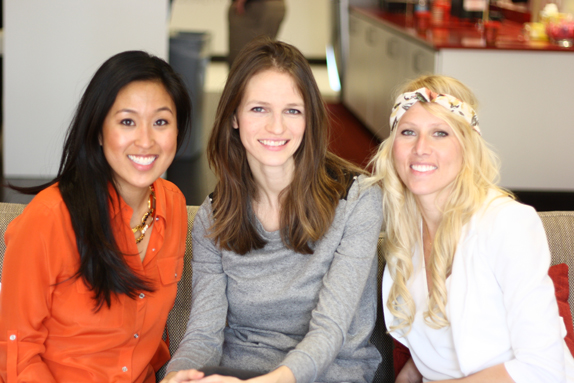 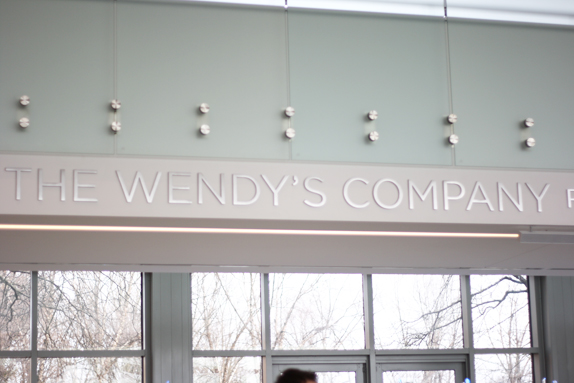 You might be thinking to yourself, “Wendy’s? Why would Victoria â€” lover of organic home-cookery and all-natural beauty products â€” have any interest in seeing what Wendy’s is up to?” The truth might surprise you, and it’s multi-faceted. For one thing, growing up in Austin, the Wendy’s on Far West Blvd was close to my high school and was THE place to grab lunch or hang out on random nights. I can so clearly remember cruising around town with my friends, all of us 16 years old and freshly minted with new drivers licenses, and a classic Friday night would end with a Frosty and fries at Wendy’s. This didn’t change much in college, either (um, hello, Wendy’s late night on a Thursday? THE BEST). Maybe it was just the fast food of my childhood, so even as my tastes have changed as an adult, it still has a special place in my heart. So much so, that even on road trips, sometimes I’ll make Joe pull over so we can pick up some snacks (and in fact, road trips are about the only time I’d ever have access to a Wendy’s â€” I don’t think they even have a location in SF!).

Secondly, a lot of you don’t know this about me, but prior to my current life as blogger and small business owner (and actually several career turns before that), I attended culinary school, and briefly worked at the local SF newspaper writing, developing, and testing recipes for print. So I was interested to talk to the test kitchen staff at such a huge, corporate restaurant chain, to learn more about what goes into the development of a new product, and how they, as professional cooks, might temper their own opinions and approaches to food with the demands of a much larger market.

Four bloggers â€” myself, Casey from Casey Leigh, Bridget from Tales of Me and the Husband, and Melissa from Food and the City â€” were all flown to Columbus to meet one another, check out what goes on behind the scenes at Wendy’s, and taste test their latest sandwich. We had no idea going in what the sandwich was, or really knew anything about it. All we were told was that it was a “bakery style sandwich.” Whatever that meant. Here’s what happened: 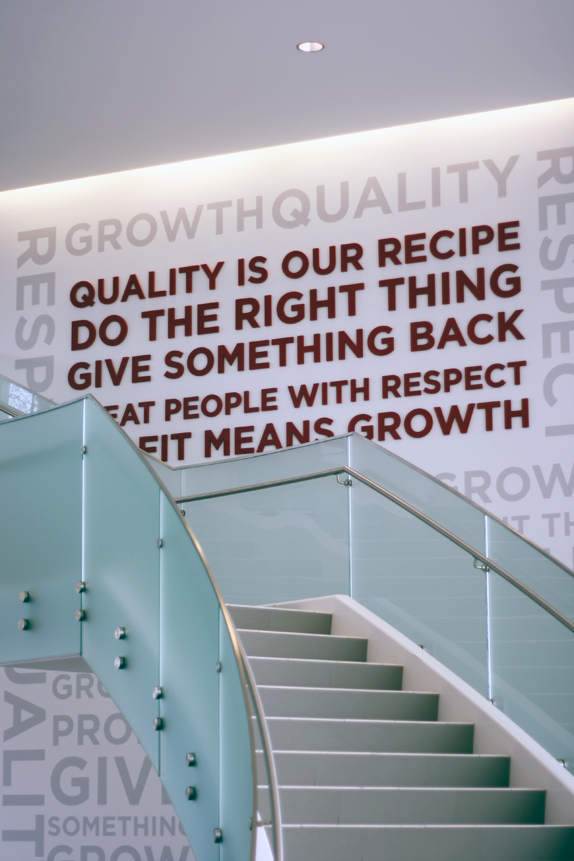 After meeting up for dinner (along with a huge camera crew, Wendy’s staff, and plenty of other personnel involved in such a huge event!), the next morning we arrived at Wendy’s HQ to check out their offices, see the kitchens, go through a few more interviews (by this point I felt like I was on a reality show!), and finally taste the sandwich. And as it turned out, we would be tasting two. 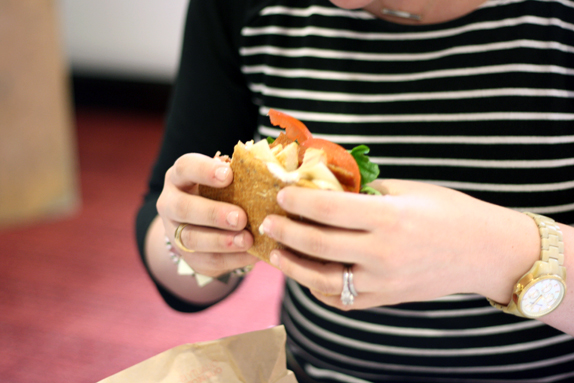 When the sandwiches were brought out to us, I actually felt nervous! One thing that really surprised me, though I guess it shouldn’t have â€” they brought us the sandwiches as you would get them in the restaurant, wrapped in craft paper, and then put in a to-go bag. Thinking back though, this kept us from having our opinion skewed more favorably if the sandwiches had been presented on plates, with garnishes and sides or something.

The first sandwich was called the Smoky Honey Mustard Flatbread with Grilled Chicken. Complete and total shocker (no, seriously): the flatbread was a six grain flatbread made of cracked wheat, rolled oats, flax seeds, sesame seeds, and hulled millet. When I unrolled the wrapper I was like, “Am I really seeing flax seeds?!?” The sandwich itself was filled with a breast of grilled chicken, sliced on the bias; mixed greens (not just romaine or iceberg lettuce, but a mix featuring red and white chard, spinach, and mizuna, which I really liked); sliced tomato; and honey mustard sauce. Simple. Now, I won’t lie: while this sandwich was good, honey mustard is not really my thing. I don’t love it when food that’s supposed to taste savory is sweet, so while it was okay for me, I probably wouldn’t get this on my own just because of my own flavor preferences. However, the sandwich itself was light, fresh, healthful, and really filling at the same time. Basically the opposite of a burger. If you like honey mustard, you’ll be obsessed. 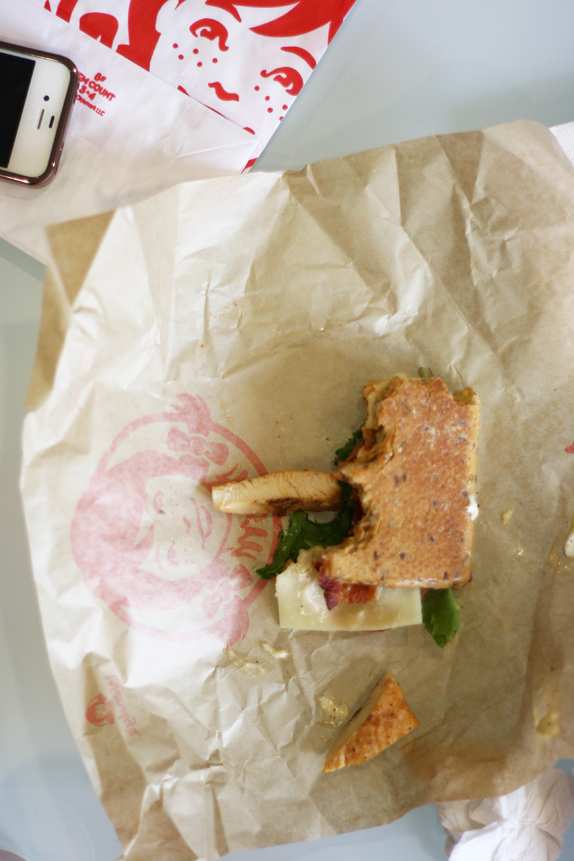 The second sandwich was more my speed. This one was the Asiago Ranch Flatbread with Grilled Chicken. Similar to the first sandwich, it included sliced Asiago cheese, a parmesan ranch dressing, and bacon. Definitely more decadent â€” the sandwich was FILLED with bacon and chicken, so if you’re trying to eat really light, it’s not the best option (though you could totally ask for cheese, bacon and the dressing on the side, or without). Still had mixed greens and tomatoes, and still on the six grain flatbread. This one was definitely my favorite of the two. It was savory and satisfying, and I thought the bread tasted great with the other ingredients.

In both cases, if I were ordering this at an actual Wendy’s, I’d probably ask for the dressing on the side. The samples we were given had too much dressing for my taste, but if you like things really saucy, leave ’em as is.

I was pretty pleasantly surprised overall, to be honest. That Wendy’s, a fast food company, now offers a sandwich option that’s made with a multigrain bread, features mixed greens and sliced grilled chicken, and it’s easy to eat on the go, is a huge departure from, say, The Baconator. One thing I mentioned during our post taste-testing interviews was that if they HAD put these sandwiches on white dinner plates, with thick cut potato chips or a side salad next to them and given it to a blind panel, they would not have guessed it was from a fast food chain. The mix of ingredients was way more “casual cafe” than what you’d expect from Wendy’s!

Here’s a look at the short ‘documentary’ that follows us four bloggers meeting and trying the sandwich:

Later this week, I’ll share a little bit more of the behind the scenes aspect of the experience, including my chat with two Wendy’s chefs/product developers (I point blank asked them why no organic, free-range, grass-fed products yet?), a look at the test kitchens, and what it was like to be followed around by cameras for two straight days. Let’s just say I won’t be trying out for The Real World any time soon.

The Full Disclosure: This post and the travel mentioned herein was sponsored by Wendy’s, though all opinions expressed are my own (Clearly. I mean, I just told you I didn’t love the honey mustard one.).