Scenes from the US Open 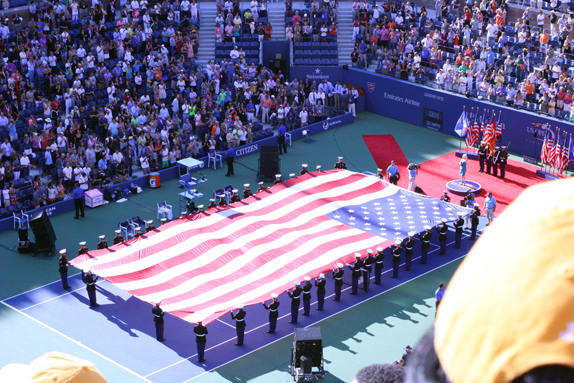 Tennis has had a special place in my heart since around November of 2002. That was the month Joe and I met and went on our first date. During that lunch, he told me that he had played tennis in high school, and seeing as how I’d never picked up a racket in my life, we agreed to hit the courts in the near future. Fast forward a week or two. My very first serve ever was actually really good, and I remember thinking that I’d be the Mozart of tennis — just a total natural, guaranteed to make it to the US Open the next year (is anyone else like this when they have beginner’s luck?). Those dreams quickly fell apart within the next five minutes, but it was still a great time. 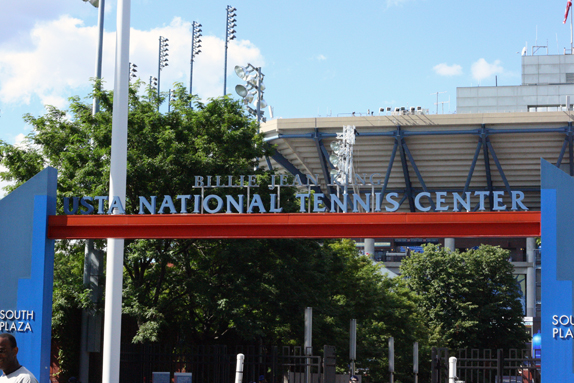 Joe’s tried playing with me a few times over the years, but I’ve learned I’m much better at watching tennis. When we were in France this summer, we’d watch the French Open every day in our little Aix apartment, trying to figure out the commentary but clearly understanding the words “quinze” and “quarante.” We were especially good at the eating and drinking while watching tennis part, skills that would come in handy when I saw my first live professional tennis match this past weekend.

I had heard that the Billie Jean King USTA National Tennis Center had such a great energy, and it couldn’t be more true. Keep reading to see more photos from the grounds and the match! 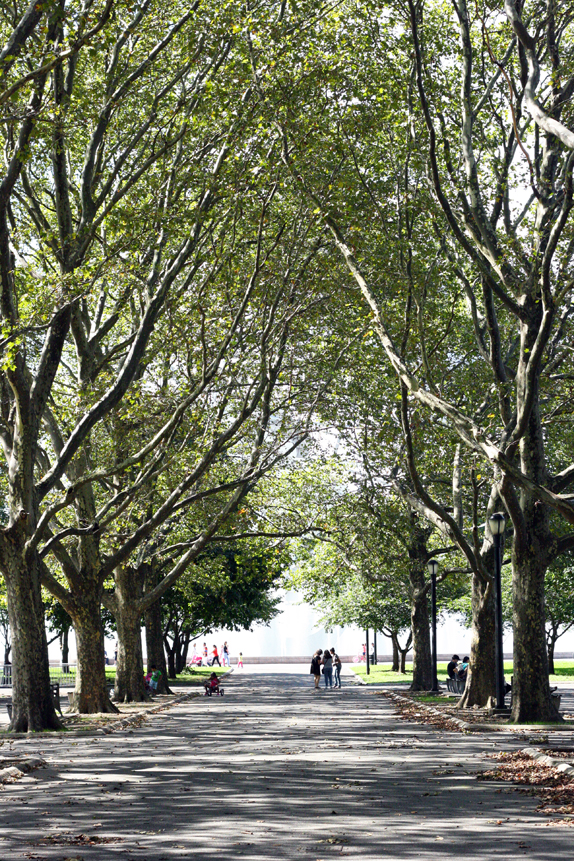 The Tennis Center is set in Flushing Meadows, a huge park that hosted the 1939/1940 World’s Fair. When we were dropped off, we walked up this pathway shaded by plane trees and landed smack dab in front of the Unisphere — a huge fountain that was created for the 1964 World’s Fair. 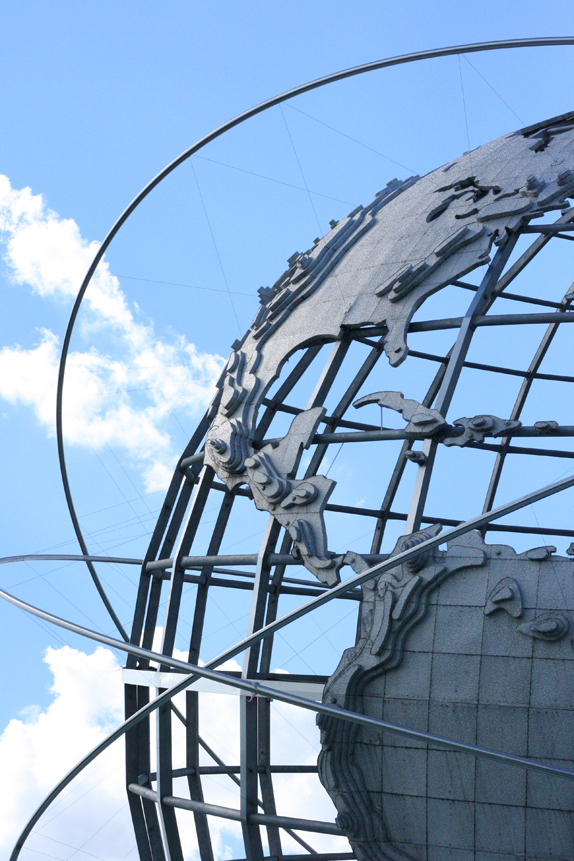 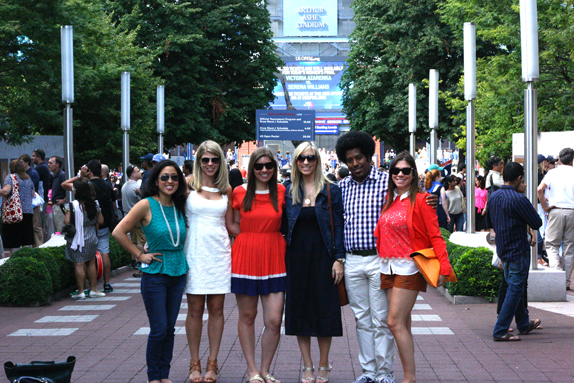 We made our way into the grounds and stopped for a quick picture. There’s me, Theodora, Katie, Lauren, Jor-el, and Hallie. 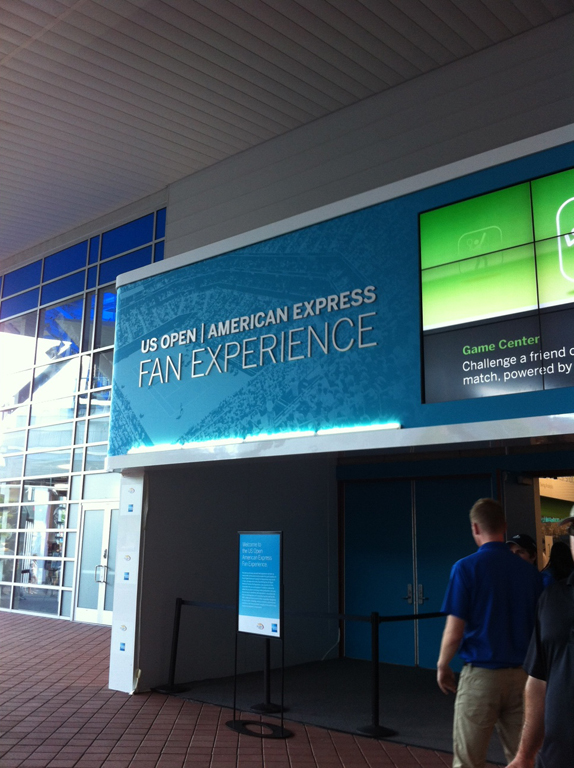 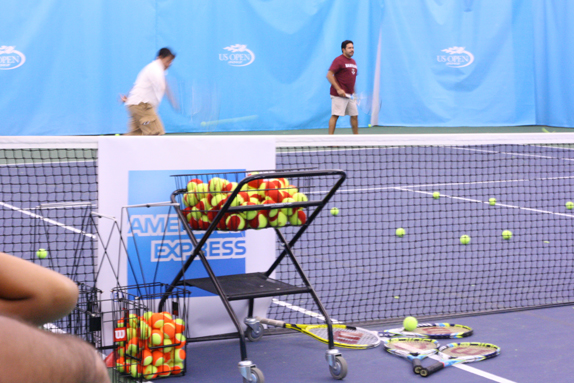 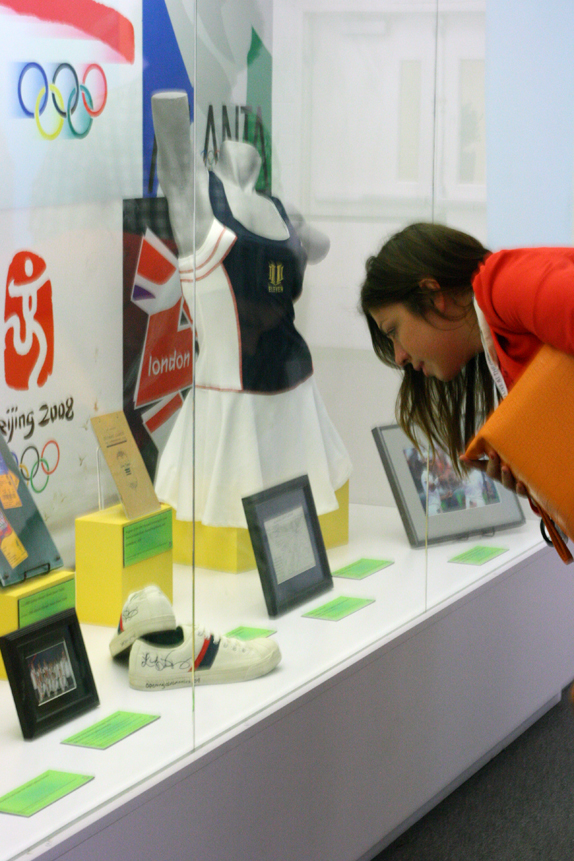 We headed over to the American Express Fan Experience center, a huge building that had all kinds of fun activities and services to pass the time before the match started. You could get your swing analyzed (card members also got video of their swing to take home with them — perfect if you’re an aspiring Federer), play Grand Slam tennis on Xboxes, or even take to a full size tennis court to show off your moves to the crowd. Word on the street was that earlier in the week, while New York was in the midst of a series of thunderstorms, players like Andy Roddick practiced on the indoor court since it was literally the only dry court the entire tennis center!

The Fan Experience also featured memorabilia from past tennis matches, including the Olympics. Most popular with us bloggers: a phone charging station set up towards the back of the space. Genius! 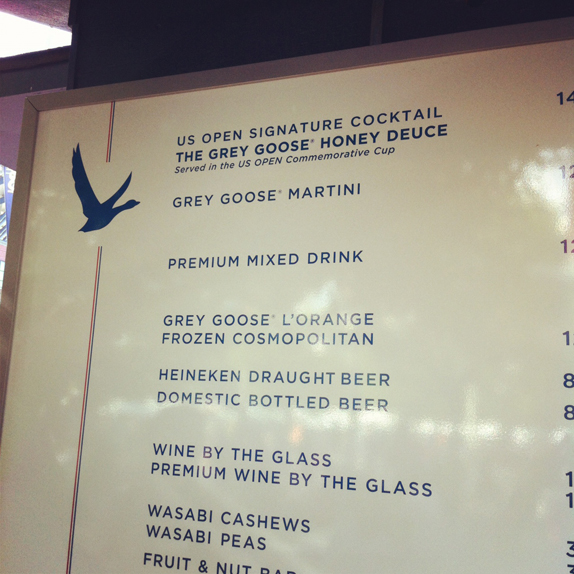 The food and beverage situation at the Tennis Center is a little different than your average sporting event. Sure, you can get a Bud Light, but there’s also a Grey Goose  and a Moet set up. Come to think of it, the center also has retail shops like Ralph Lauren and Lacoste. Like I said, it’s not your typical NFL game. 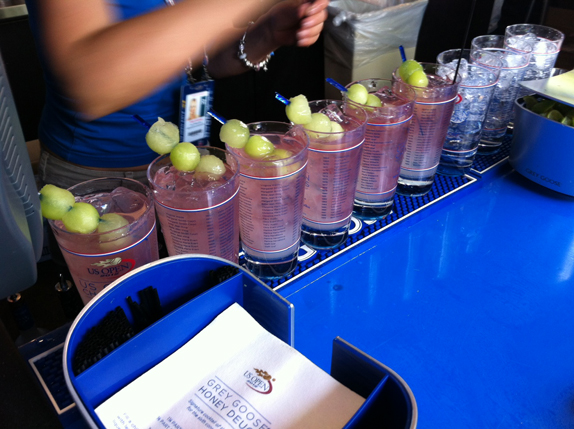 We stopped by the Grey Goose vendor and ordered up a slew of Honey Deuce’s, the official drink of the US Open. Jor-El was awesome enough to score us the recipe: 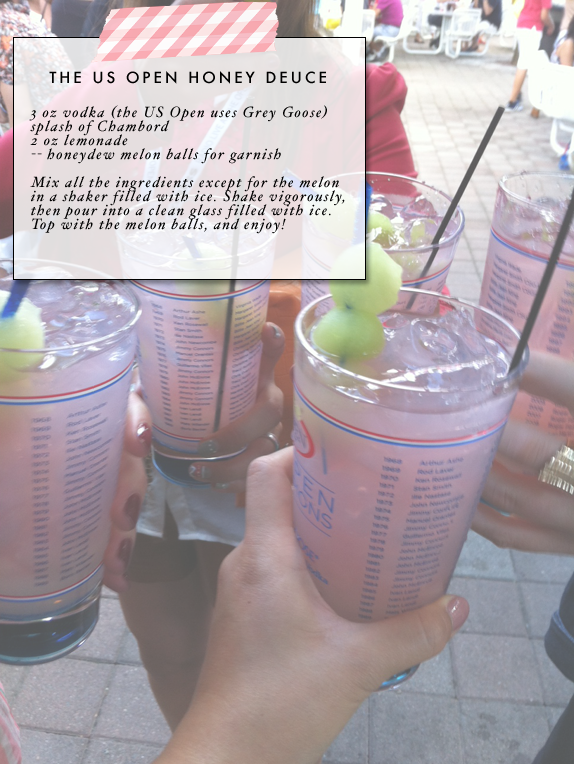 Yes, it’s as delicious as it sounds.

Next, it was time to head into the stadium! 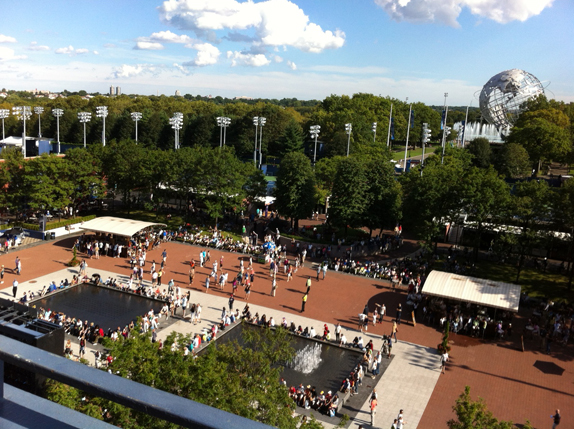 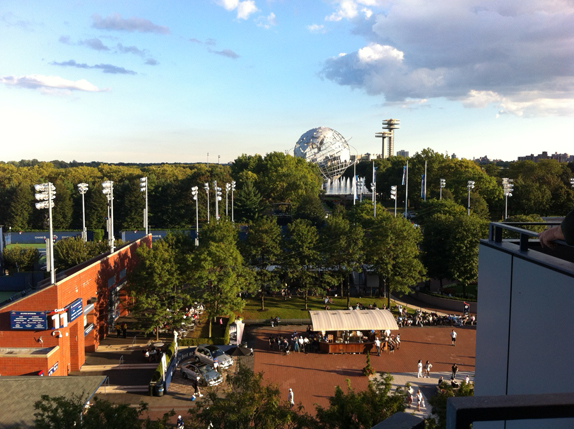 Once you head up the escalators, the views of the park are pretty fantastic. 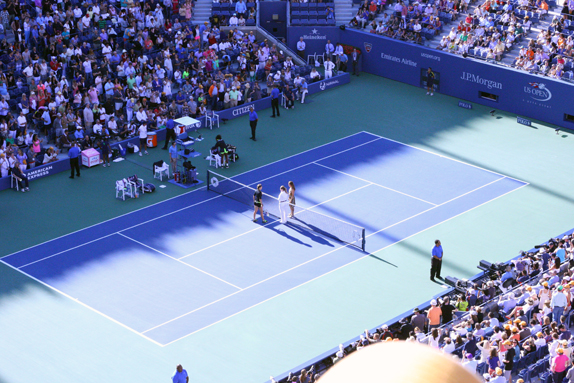 I honestly don’t think there’s such a thing as a bad seat in this stadium. The pitch between the rows is steep enough that you can see the court perfectly. We got to our seats early enough to see the players warming up (and a welcome from Jennifer Capriati)… 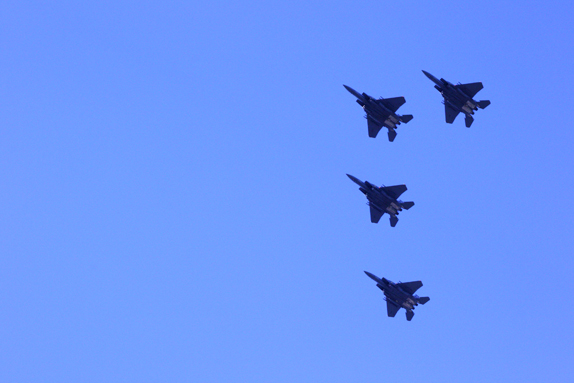 …as well as the jet flyover. Megan Hilty (from Smash — did you guys watch this awesome/trainwreck of a show last season?) sang “God Bless America.” Girl’s got pipes. 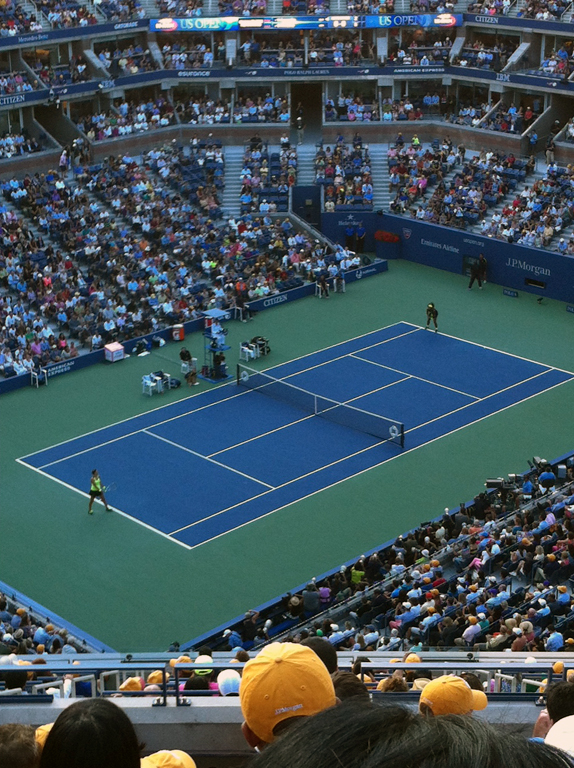 Then, it was time for the match. And play!

Several of you tweeted at me about Victoria Azarenka sounding like a bird. Believe it or not, from where we were sitting, though you could hear it, it was NOTHING like hearing it on TV. I think because the sound recording devices are right on the court, it’s much, much louder. Slash, more awkward. Both she and Serena were rocking a neon look, and I heartily approved. 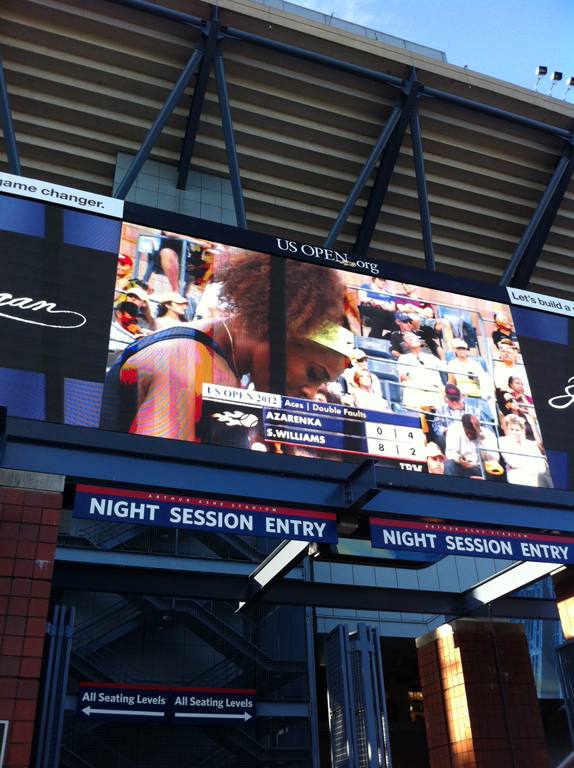 Because of my flight time, I was a little sad to have to leave the match early (especially because that third set was SO dramatic!). I made it out of the stadium quickly, so I stole a couple minutes watching the match right at the entrance to Arthur Ashe stadium. It looked like such a fun time out there — you can buy tickets to get access to the Tennis Center, and then buy snacks and lay out a picnic blanket and watch on the Jumbotron. The place was packed and the crowd looked like they were having a great time.

The good news? I had the time of my life. The bad news? I now have a serious addiction to the sport. I came back to SF and told Joe I wanted to take lessons. He thinks I’m nuts. Someone hide my wallet.

Full disclosure: The Glam Network and American Express covered my travel, accomodations, and tickets in order to attend this match, and also provided a clothing budget. All opinions are my own.