The castle behind Downton 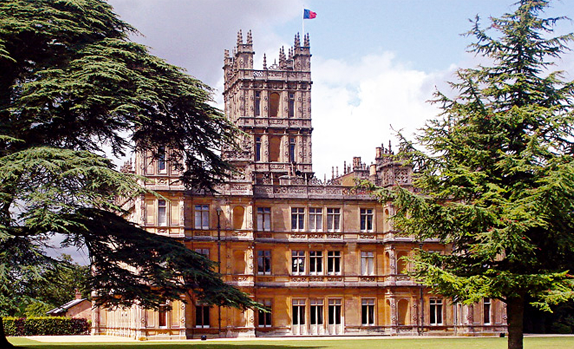 Are you watching Downton Abbey? If not, you should be. If the fact that it picked up 6 Emmys last year, and was nominated for 4 Golden Globes (it took home best miniseries/television film) doesn’t sway you, then trust me, the gorgeous costumes, lush interiors, and compelling story line should.

The background is this: the series opens up in April of 1912, on the morning after the sinking of the Titanic. This sets in to motion a series of events that carries us through the whole of the season. In the second season, currently available to watch for free online, the story is set during World War I. Downton Abbey is a period drama, to be sure, but it also takes a look at how the elite and the help interacted, with their own class and with each other. I LOVE IT.

I was curious to learn more about the gorgeous house that has such a big roll in the series. Here’s what I learned.

Downton Abbey is actually ‘played’ by Highclere Castle, a large home situated in Hampshire, UK. Like in the series, it has belonged to one family for generations, and major building of the house began in the late 18 century. One fact that I thought was very interesting: the 5th Earl of Carnarvon, along with Howard Carter, discovered the tomb of King Tut in 1922!

[spoiler alert] Similar to the series [seriously, if you don’t want to know anything, just skip to the next paragraph], Highclere was converted into a hospital during the First World War, although the lady of the house, the 5th Countess of Carnarvon, was a bit more willing than Cora to have wounded soldiers under her roof, and was well-remembered for her efforts in caring for these men.

Check out the mini-Highclere tour, after the jump! 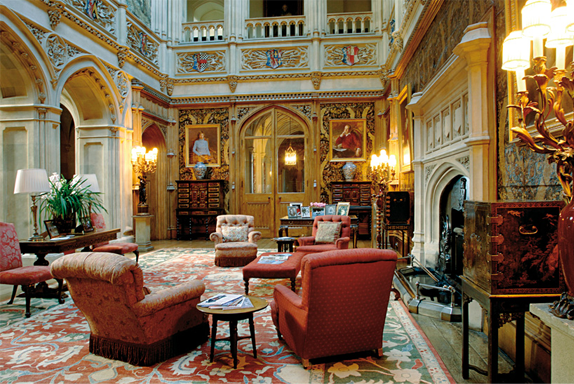 This is the house saloon. According to the Highclere website, it was the physical and social heart of the home. The wall coverings in this room are made of leather, and date to 1631! 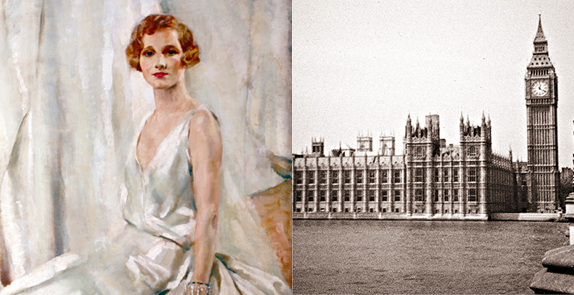 On the left is Catherine, the 6th Countess of Carnarvon. Funny that she looks a lot like Edith, but to me, appears to have some of Mary’s swagger. On the right is Parliament (aka the Palace of Westminster) and Big Ben in London. Sir Charles Berry, the architect of Highclere, was also building Parliament at the same time he built the Castle. Notice any similarities?? 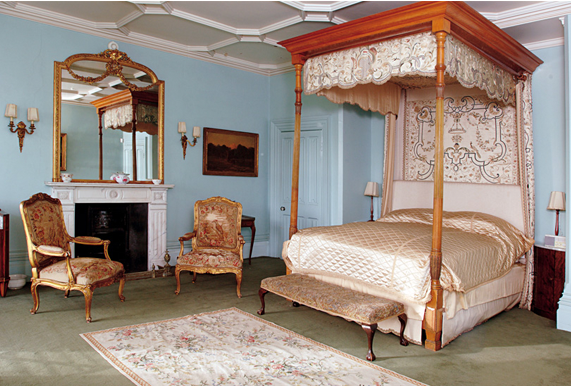 One of the upstairs bedrooms in the castle. I’m pretty sure this might be used as Sybil’s room for filming, but I can’t tell for sure. 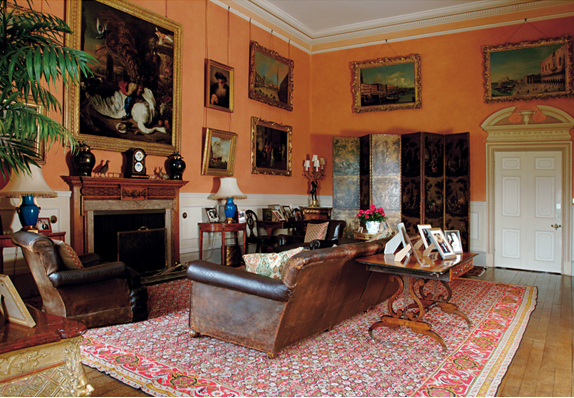 The men’s smoking room. Don’t you love the paint color? 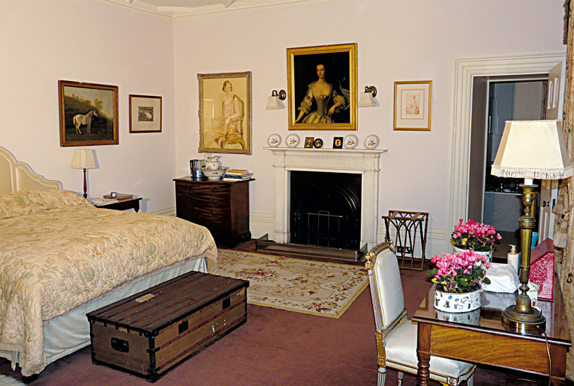 This smaller bedroom was used as an operating room during the First World War. 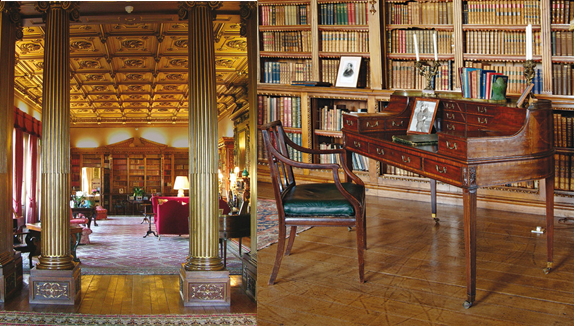 The library at Highclere contains thousands of (probably leatherbound) books. Looks just like it does in the show, doesn’t it?? 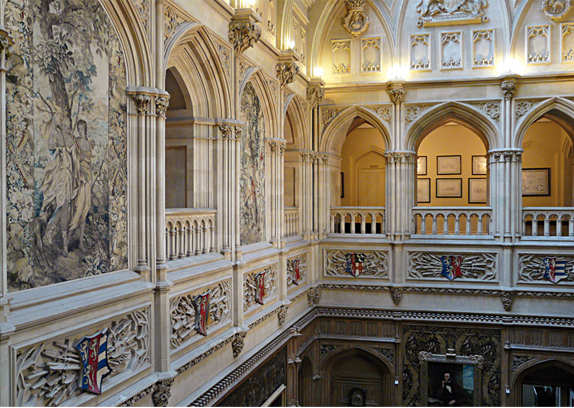 This is the gallery above the saloon. The crests you see along the walls there are the Carnarvon family crests. I kind of wish we had family crests on this side of the pond. Sigh. 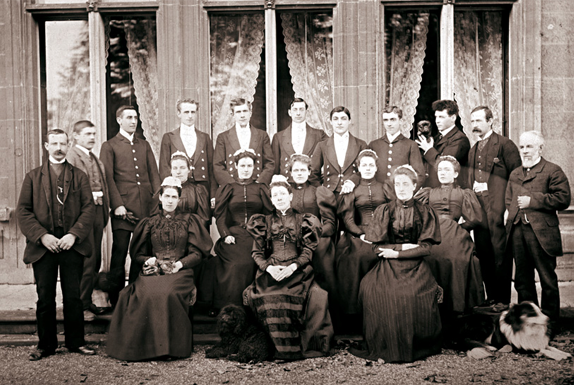 I thought this was really interesting. This is a photograph of some of the staff at Highclere, taken in the late Victorian era (you can tell by the dresses that this would’ve been pre-Downton Abbey). Is there a Mr. Bates among them? 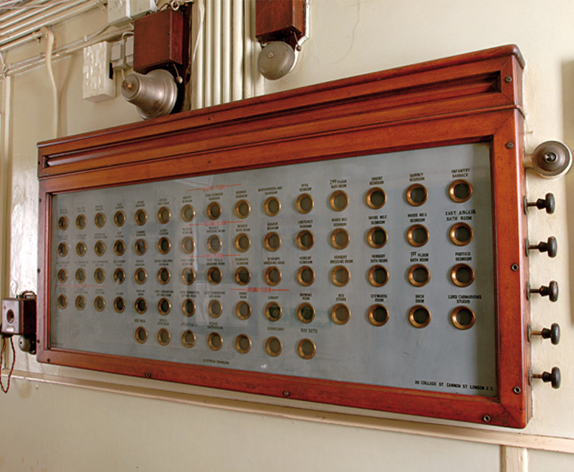 Once electricity was installed throughout the house, no doubt the classic bellboard (with actual bells) was replaced with this one, which would light up and make a sound whenever the staff was being called for. Look at all those rooms to tend to!

Finally, some of the gorgeous grounds on the Highclere Estate. Well, are you intrigued yet? I’m not kidding, I’ve been obsessed with this show for the last couple weeks. My friend Susannah gave me the first season as a gift, and I don’t know why it took me so long to get into it. You guys will love it!

{Image Credits: Highclere Castle website. If you’re interested, there are tons more photos and lots of historical information on their site!}