Something really ground breaking happened this weekend. Joe and I were sitting in our front living room, which plays host to this couch from CB2. It reads very modern on the CB2 site, but it actually blends in perfectly with our super Edwardian apartment. And the seat cushion is extremely deep, so you really feel like you’re lounging. Anyway.

The couch currently has a row of different colored throw pillows along the back, which Joe had picked out himself when we first bought it. So we’re sitting there, talking about something, and all of a sudden he goes, “I HATE those pillows.”

And it’s true. The pillows we have on this particular couch are fine, just whatever. They’re comfortable and plush, basic solids in a couple different colors, but given the fact that it’s a deep brown velvet sofa, I feel like we could’ve gone with pillows that are much more interesting. But I never wanted to say anything because they were Joe’s pick, and when you are decorating your house with a man who wants to have input, you have to make concessions for things like pillows that you’re just okay with.

So now we’re brainstorming new ideas for pillows. He has it in his head that all he wants is two rectangular lumbar pillows. He seems to think I can a) find two that together are long enough to span the 76″ couch … i.e., 38″ each, and b) that two long pillows will look really good. I’ve found some okay options for rectangular pillows, but they’re definitely going to be hiding in their respective couch corners, because 38″ pre-made pillows don’t really exist: 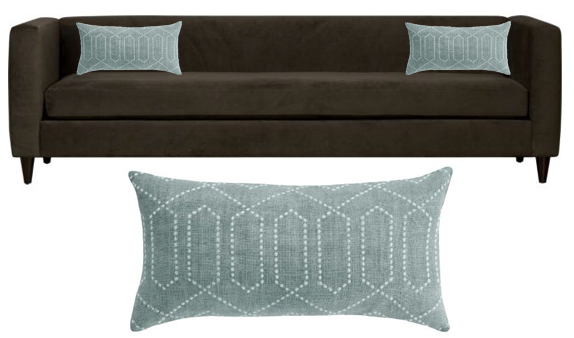 Option 1: Joe loves these. I ordered these Dwell Studio pillows for the reception area at my work, and I like them, but in my own living room with such a big, dark, solid colored couch, they read a little blah to me. Plus, they remind me of work. No bueno. They’re currently sold out online, so this might be a non-issue anyway. 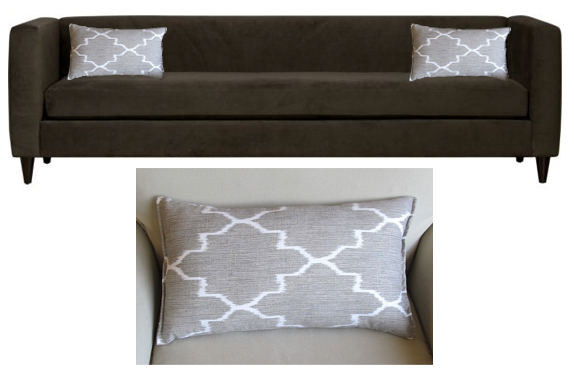 Option 2: Pillow from the Bolster Queens Etsy shop. I like this quatrefoil pattern, and it’s timeless enough that we could use the pillows anywhere in the future, but again, just a little too safe, you know? I do love me some gray, though. 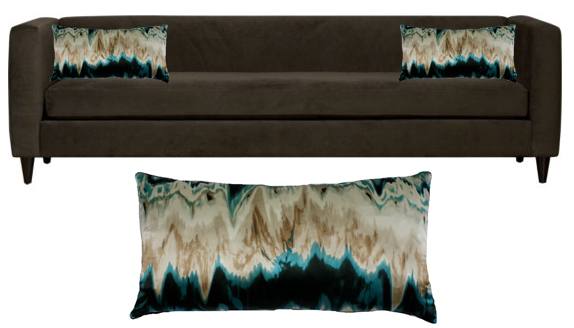 Option 3: I’m pretty much in LOVE with this Furbish pillow. I think it’s a great option, but I would prefer to mix it up with some brighter pillows — maybe with orange accents? — to liven things up a bit. This pillow would honestly look better on a much lighter background fabric. For reference, we also have an orange CB2 Parlour chair in this living room, and a high gloss white rectangular coffee table. There’s also a rug that is gray and orange, though it might not stay. 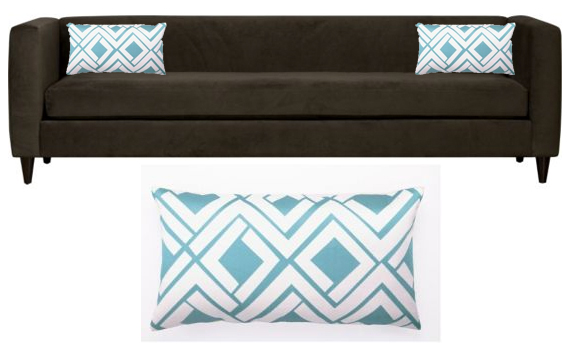 Option 4: I stopped in the Krimsa store last night before heading to the gym and spotted this gorgeous Trina Turk pillow. I like the geometric pattern and the fabric in person was really stunning. I wonder if I’ll get sick of the turquoise/brown combo though. Also, where would the orange in the room come in to play?

Yes, yes, I’m still obsessed with Chiang Mai Dragon fabric and I don’t even care what you think about it. In case you’re interested, all but the Trina Turk pillow (which I threw in for good measure…I really did like it in person) can be found on Etsy, here, here, here, here and here. But seriously. Wouldn’t this combo help bring the orange occasional chair into the picture more seamlessly?

So based on all this, it looks like we might be in for a custom pillow making job. What do you guys think? Do you think we could get away with two long rectangular pillows? I think it’ll look weird, but maybe I can’t visualize it. Joe says he doesn’t want to go too bold, but I just think he doesn’t know what he’s talking about. Help! Any advice, opinions or resources are greatly appreciated!