Happy New Year!!! I can hardly believe that 2010 is gone and I suspect most of you feel the same. I swear it’s something about the 2000s….everything just keeps getting faster and faster!

Last year around this time, I set a few goals for myself in 2010. Walk to work as much as possible. Take more photos. Write more. Stay in better touch with friends and family. Keep up with French lessons. Save money. And let go — as in, stop getting anxious over nothing.

I can’t say that I met and mastered every single one of these goals (um, yeah, walk to work as much as possible? Around March or so, it was decided that MUNI was a much better gig), but I certainly like to think I made baby steps and even large strides in some areas.

I’m not beating myself up too much for not meeting all of my 2010 goals, because the reality is, it was (was…so weird to type that) a pretty amazing year. We spent 10 days in Paris, which I’ve decided is the greatest city in the world and a place that Joe and I will always return to for relaxation, inspiration and some seriously good cheese. We took lots of weekend trips together. I saw my cousin (who in some ways is like a brother to me, as we’re both only children) graduate from high school and get into his first choice college. I re-established some relationships with college friends and am so thankful I did. I had a job all year, and not only that, but I kind of like it! And of course, the Giants won the World Series.

It’s almost difficult to list out all the things that happened in 2010, because it was one of the most full, fun and peaceful years I’ve had in recent memory. I’m grateful for it. But I’m also eager to see what new adventures 2011 could bring.

And with that, I present to you this year’s only resolution, courtesy of ThxThxThx. I saw it the other day when I first came across the site, and I knew right then and there that this was a promise I wanted to make to myself in 2011: 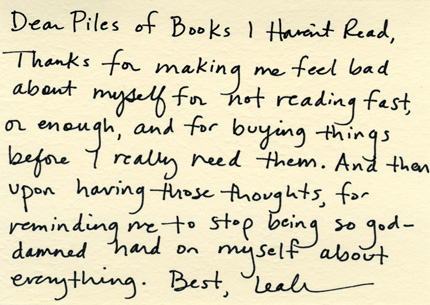 Here’s to twenty eleven. Make it a good one.