This past Monday evening, I started a three week intensive calligraphy class, offered through Paper Source.

Why calligraphy and why now? I’ve always been interested in learning more about it. For as long as I can remember, I’ve loved addressing envelopes with pretty script. And I think it’s amazing how calligraphers are able to write invitation after invitation with every letter perfectly spaced and exactly the same.

I also secretly harbor a wish to start a hand lettering business. Speaking of which, dear reader, what do you think of such an idea?

Anyway, the class was fantastic. Small — only 7 people total — and with a fantastic, funny instructor who has been doing calligraphy for over 20 years. In this class, we’re learning a very basic italic calligraphy. No cursive really involved.

To warm up our hand and wrist muscles, we started by drawing lots of different lines: Harder than it looks to draw lots of horizontal and vertical lines, identical to one another, over and over and over!

Then we learned lowercase letters by group. Letters are grouped together based on the pen strokes you make with each. So, the lowercase letters i, l, t, j and f were all first, followed by the letters r, h, m, n, u and y. Next were the letters a, d, g, q, b and p. These are so grouped because of the little ellipse you have to draw when forming the letters. That ellipse is a bastard, and now the bane of my existence.

C, e and o were a little better. They’re sort of tough to do also, but if they’re a little more round than they should be, they still look good. Last up were the letters v, w, z and z, then s and k. The letter s is a butthole too, as evidenced in the above photo.

This was the last thing I practiced after the three hour class: Verdict? I’m loving it! Monday was a lot of fun, different than what I was expecting, but I still learned so much. One thing I’ve really taken away from class is that with any type of calligraphy or hand-lettering you learn, you’re essentially trying to mimic someone else’s handwriting. To that end, if it doesn’t look exactly like your teacher’s, or like the example, or like the typeface your computer spits out, that’s okay. Infusing your own style into the lettering is absolutely encouraged. What’s most important is that your letters are all equally spaced, done with a steady hand, and essentially look identical — as IF a computer did it. It was amazing to look around at other people’s work after the class and note that while we’d all learned the same letters, our differing styles were immediately obvious. Some people had very rounded m’s and n’s, and others (like mine) were much more sharp and pointed. I can’t wait for next week!

Some fun facts about calligraphy, typesetting and penmanship:

+ Back in the day, cursive script was used for letters and records, while a style called uncials were used for literary works.

+ Ever heard of the typeface “Zapf Chancery?” It’s actually named after a famous calligrapher named Hermann Zapf, who created the typefaces Palatino, Zapfina and Optima. Isn’t it amazing to think about a person hand lettering a typeface that will be used around the world?

+ Platt Rogers Spencer is known as the father of American penmanship. His system of teaching writing was developed in the mid 1800s, and was taught in American schools through the 1920s. Examples of Spencerian script are SO beautiful — I wish we’d been taught how to write like this in grade school! 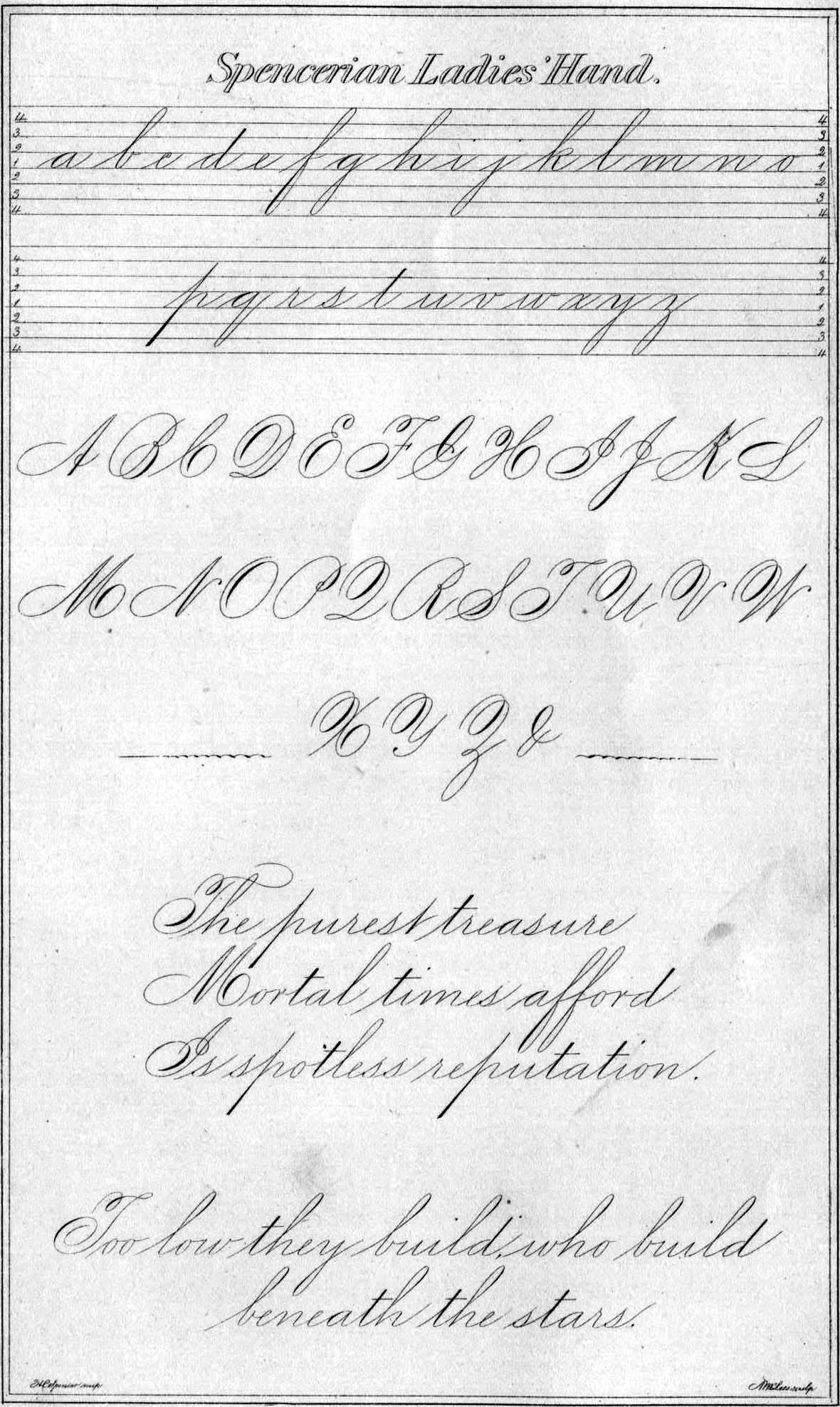 + After the Spencer Method came the Palmer Method, which is the method of cursive most of us learned in school. It’s far less pretty than Spencerian script, and reminds me of third grade: