How to dice an onion

Dicing an onion is literally THE first knife skill we covered in culinary school, probably because you end up chopping a lot of onions during your time as a student, and also because the technique is applicable to lots of other items — think potatoes, carrots (with a few extra steps), and more.

But, one small confession: I actually learned how to chop an onion by watching Everyday Italian with Giada de Laurentiis when I was still an undergrad student. A little experimenting in the kitchen, a few cut thumbs, and before you knew it, I was an onion chopping fool. Though I love chopping onions (there’s something so zen about it), when you’re first learning, it can seem time consuming as your muscles get the movements down. But I promise you (PROMISE YOU) that the more you do it, the faster you’ll be. Same with anything, right? Practice makes perfect.

This tutorial covers how to medium dice an onion. If you need a larger or smaller dice, just make each of the cuts tighter. Hopefully you’ll see what I mean.

First things first. Lay the onion on its side (on its equator), and slice off the stem end. This isn’t the end with all the furry little things sprouting out of it — that’s the root. The stem end is the other end, and might have a dried, papery nub on it. Next, turn the onion onto its now cut-off head, and slice it in half, right through the root. When Giada was teaching me how to slice an onion, she (and many others) would also slice off the root end. I always did this too, until my magnificent Basic Skills chef, Chef Amy, told me that keeping the root in tact will help keep the many layers of the onion together as you dice, resulting in more uniform pieces. As usual, Chef Amy was correct.

After you slice the onion through the root, set one of the halves off to the side. With the other half, peel the papery skin off the outer layer, then lay it with the cut side down, so that the root is at your left (or at the right, if you’re left-handed…does that make sense?). Here, it should just look like this: Now, have you ever noticed how onions all have those faint little grooves on them, which run from pole to pole like longitudinal lines on a globe? Sometimes, you’ll even see that the grooves have different colors, like my yellow onion, which had little green lines in the grooves. Often, these grooves make a great guide for a medium dice. Without slicing through the hairy root, use your chef’s knife to make vertical cuts that follow these grooves across the entire side of the onion. 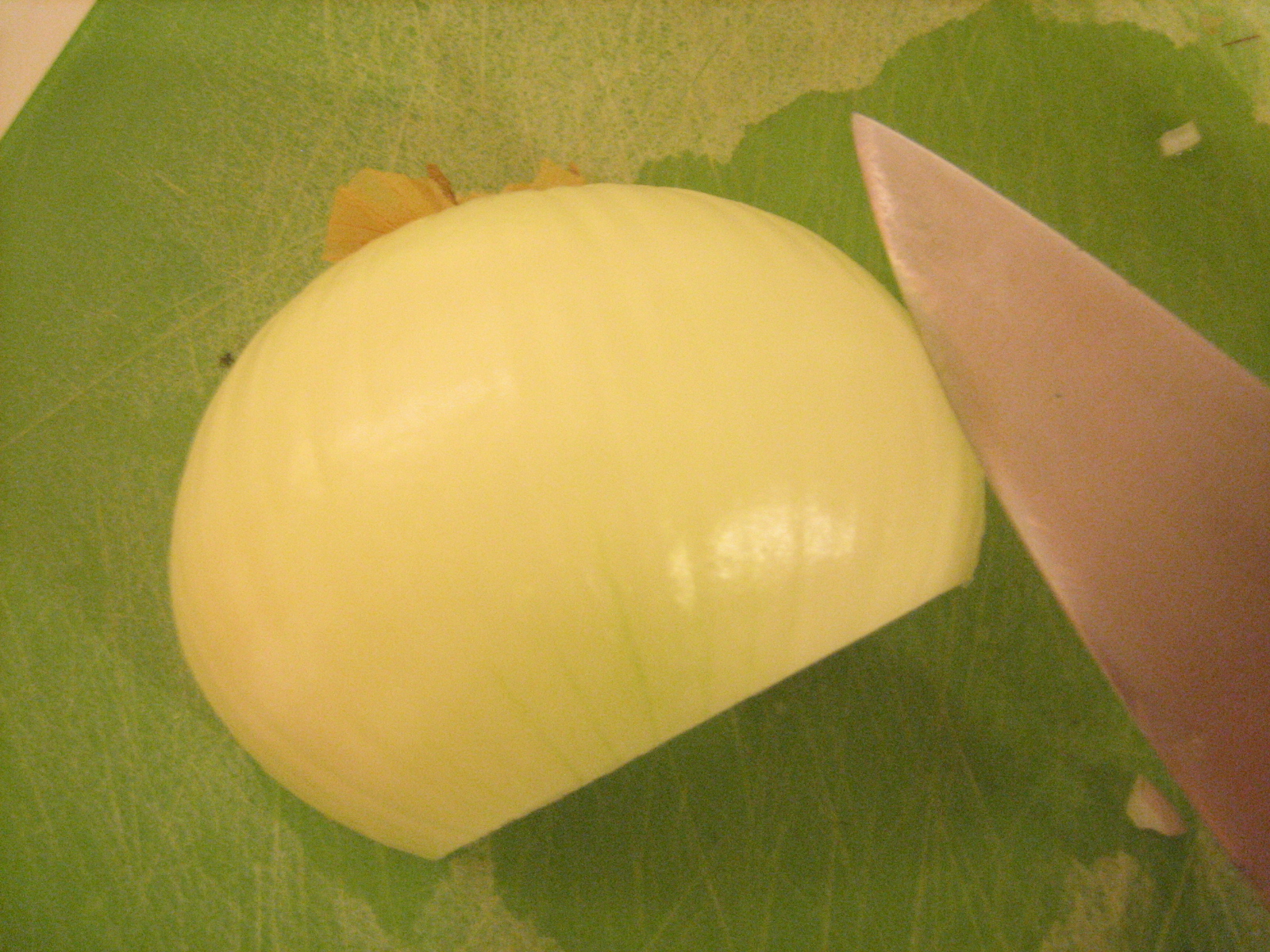 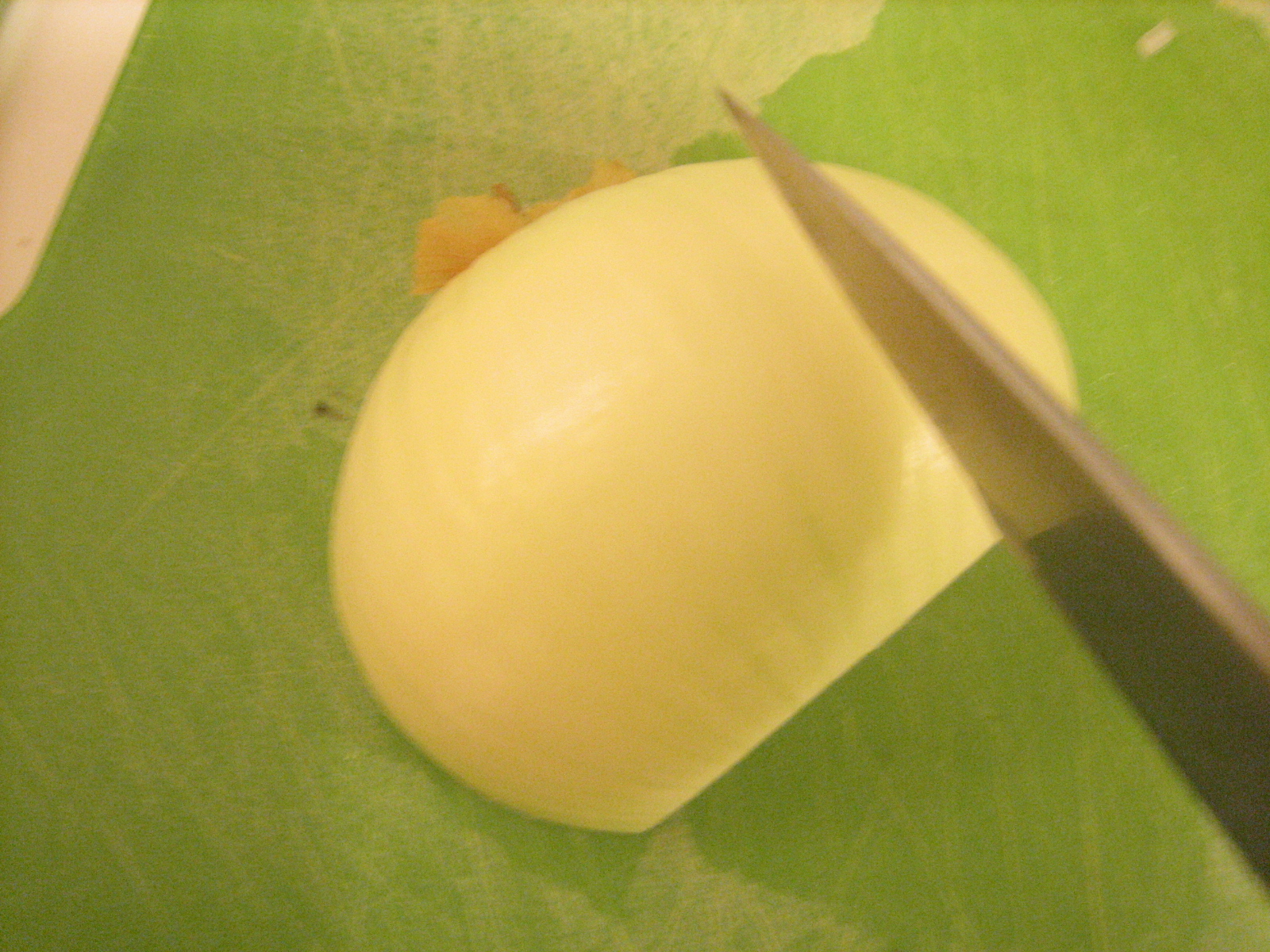 When making the cuts closest to the bottom (or cut side) of the onion, I like to angle my knife a bit so that these diced pieces will be a bit more even. 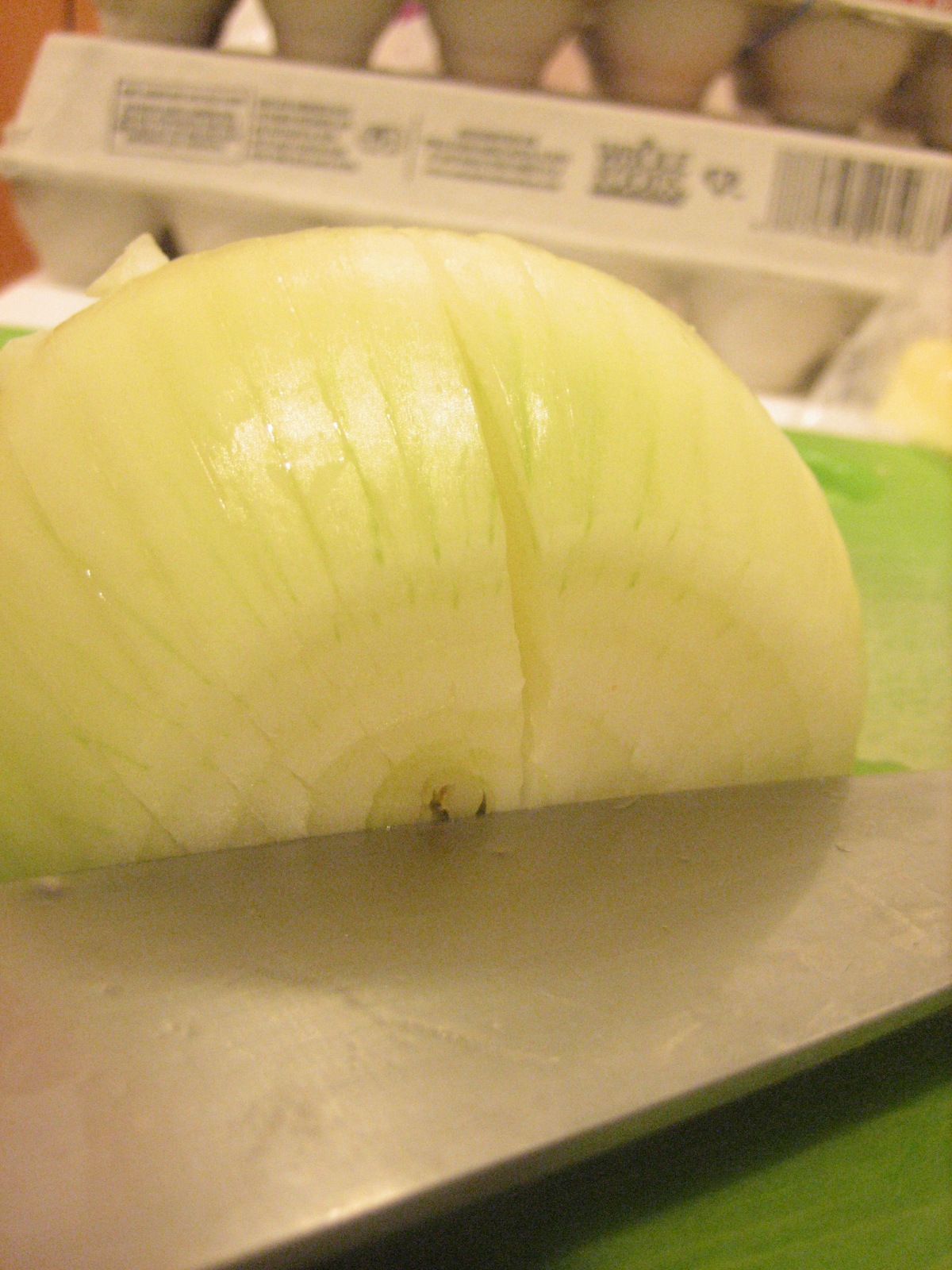 With the vertical cuts made, now I can make plane (or horizontal) cuts. This is the part where you may need a bit of practice, and where you’re most at risk for slicing yourself if you’re not careful. With your fingers “clawed” up at the top of the onion, use a wide sawing motion to slice your knife thorugh the onion in one clean, smooth movement. You don’t want to saw little by little, as this will force your vertical cuts apart and make it more difficult to complete the dice.

Make your plane cuts all the way up your onion, in even increments. As you can see, if you made your vertical and plane cuts wider or more narrow, you’ll end up with a larger or smaller dice, respectively. Here’s what the onion will look like after you’ve made your vertical and plane cuts: Now, the final step! Make more vertical cuts perpendicular to your first cuts along the equator of the onion, headed towards the root “pole.” (Another way to think about this is that you’re making latitudinal cuts on your onion “globe.”) Again, keeping the width between these last cuts similar to the width of all your other cuts will result in a more even, squared dice (versus diced pieces that look rectangular). Ta-da! A lovely medium dice, ready to be sauteed in my frittata. 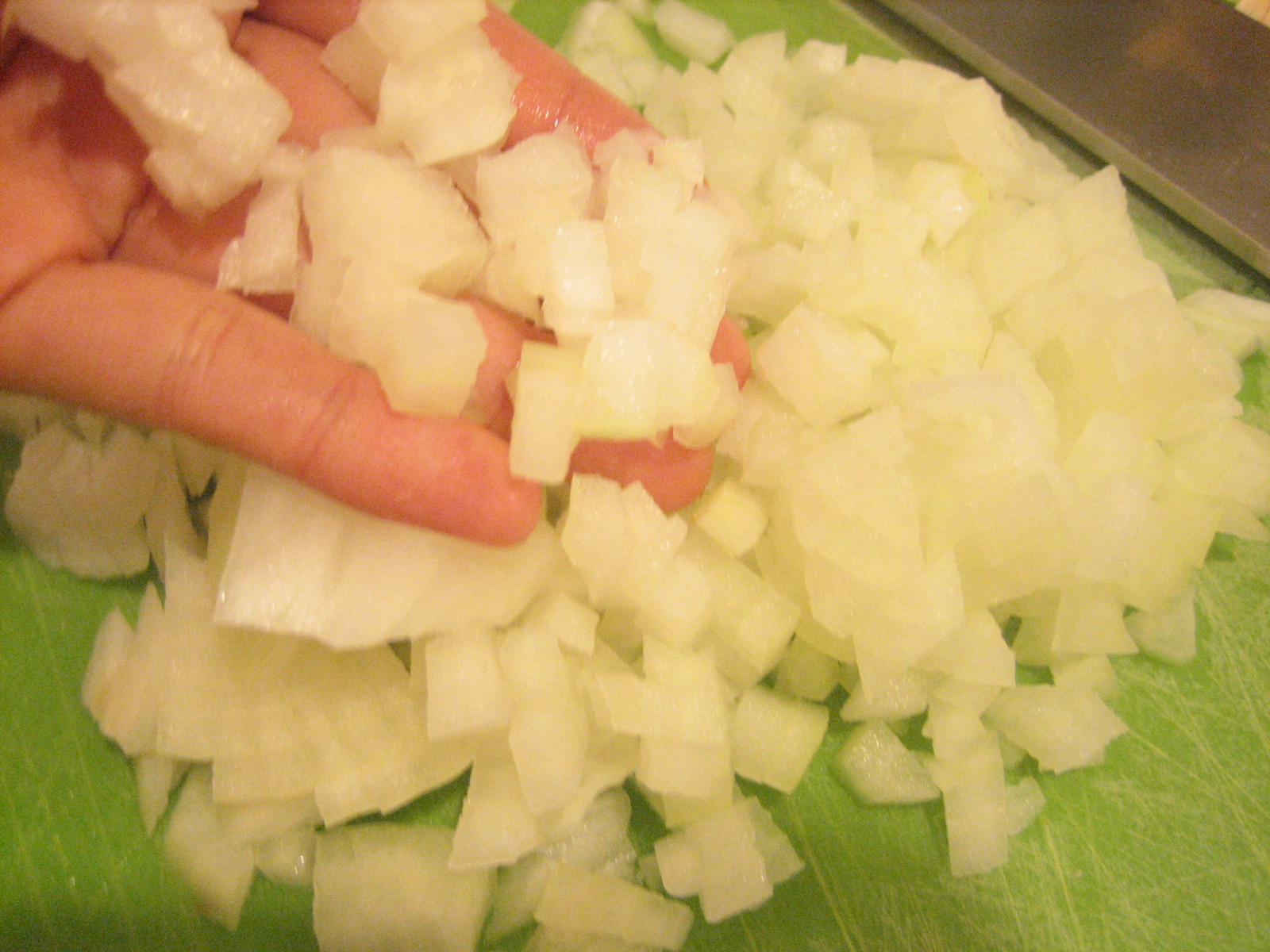 If you try this technique at home and your onion sort of falls apart, don’t despair. It takes practice! One thing that will really help keep the halved-onion together is not slicing through the root when you make your first set of vertical cuts. But, if you end up lopping off a big piece of the onion, try and practice making even cuts through those little sections. Just keep at it! You’ll get the hang of it.

And if it makes you feel any better, every now and again if I’m not paying attention as I make my plane cuts (i.e., I’m not “clawing” up), I’ll totally still slice my fingers. All cooks cut themselves. It’s the only reason I have antiseptic wash and 5 different sizes of Band-aids in my medicine cabinet.

(Once, someone in my class at culinary school was cracking open a coconut with a cleaver, and her thumb got in the way. Now THAT’S a kitchen nightmare.)