I really love grapefruit. I really don’t love fennel. Who knew that when you put the two together, you’d get something revelatory?

They’re an odd pair, to be sure, but I think my respective love and loathing of each ingredient is even odder. I mean, grapefruit is a really polarizing fruit. Bitter, tart and powerful, grapefruit is probably the least liked of all citrus — or as Joe likes to say, it “tastes like a cross between an orange and a monkey’s butt.”

But since I was a little girl, I’ve loved that monkey’s butt (wait, what?). My mother was never a fan of orange juice, but she loved starting her morning with either a glass of cranberry juice or grapefruit juice (and especially grapefruit juice when I was sick. She used to insist that grapefruit juice was the only citrus I consumed when I had a cold.). Back then, it was hard to find grapefruit juice in anything except a big can. I’m surprised my tooth enamel didn’t erode more given how much grapefruit juice I drank.

Mom didn’t stop at grapefruit juice either. She showed me how to halve a grapefruit and slice between the pith (those perfect, pre-determined guidelines) to form little wedges you could pop out with a spoon. In the mornings before school, I was allowed to sprinkle the top of the fruit with granulated sugar; a sweet-sour treat to start my day.

And my love for grapefruit doesn’t stop at eating it. Much to Joe’s dismay, I tend to love grapefruit scented things — in soaps, lotions, cleaners. It just smells so fresh and luscious!

Fennel? Well, let’s just say that anything flavored like licorice has never held a special place in my heart. I didn’t even taste fennel until I was in college, but similarly flavored ingredients — black licorice, anise — have always tasted awful to me. Red Twizzlers? Fine. Black Twizzlers? Bad. Like my other nemesis, raw celery, raw fennel still makes me go “blaaarrgh,” but recently, roasted or caramelized fennel has been palatable. Only just.

[Aside: I know pastis is the thing in Provence, but I think I’m just going to have to stick to rosÃ© while there. I don’t want to be THAT American who turns their nose up at the Pernod.]

But they say that the older you get, the more you should re-visit foods you thought you hated, since your palate is always evolving (and usually for the better). So when I saw this tee tiny little fennel bulb last weekend at the market and the first pink grapefruits of the season, I was inspired to see if the two could make merry. A thick, meaty filet of halibut later, and I had a plan.

First, I preheated the oven to 375Â°. I wanted to try out this nifty technique from the Pioneer Woman, where you pan roast the fish and don’t flip it, so the oven had to be called into service.

Next, I cut one lovely pink grapefruit into suprÃªmes, and put the cut fruit and the juice from the remnants into a small bowl. I cored my itty bitty fennel bulb, then julienned it. Into the saute pan it went, with a bit of brown butter, olive oil, thyme leaves, and sliced shallot. I turned the heat up to medium high and caramelized the goods. A splash of white wine to deglaze, a sprinkle of kosher salt and black pepper, then the whole mixture was tossed with the grapefruit. It looked like this: 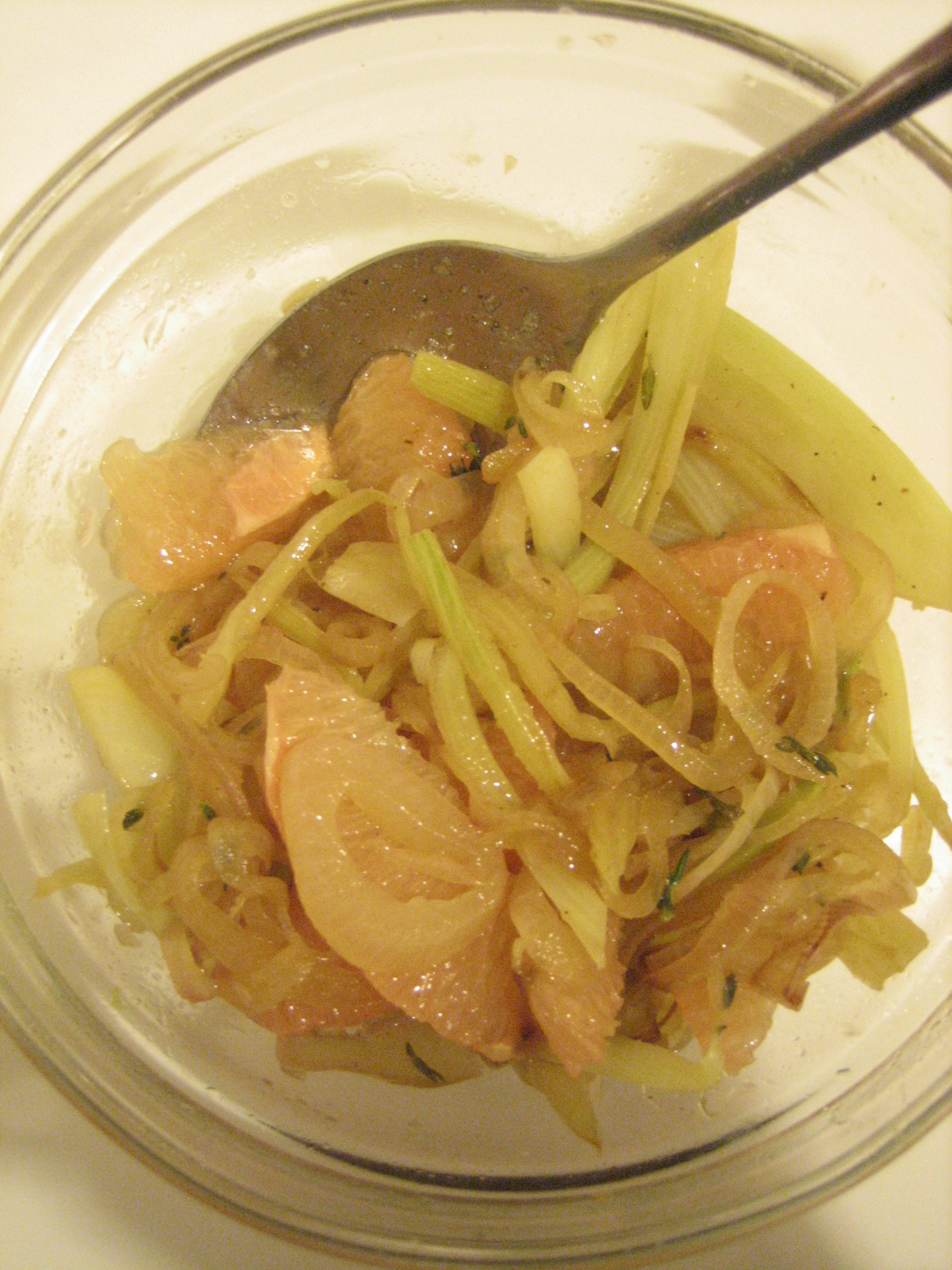 Sure, the heat muted all the colors a bit, but I promise you (pinky swear) that the flavors were most certainly NOT muted. It was yumsville. The acidity from the grapefruit was great with that rich brown butter. The fennel? A surprising backnote. What’s nice about cooking fennel is that it mellows out a lot — thank goodness!

Meanwhile, I cooked the fish. In the same saute pan (cleaned out a bit), I heated a little more butter and olive oil. I seasoned the fish, then plopped it (gently!) into the hot pan. 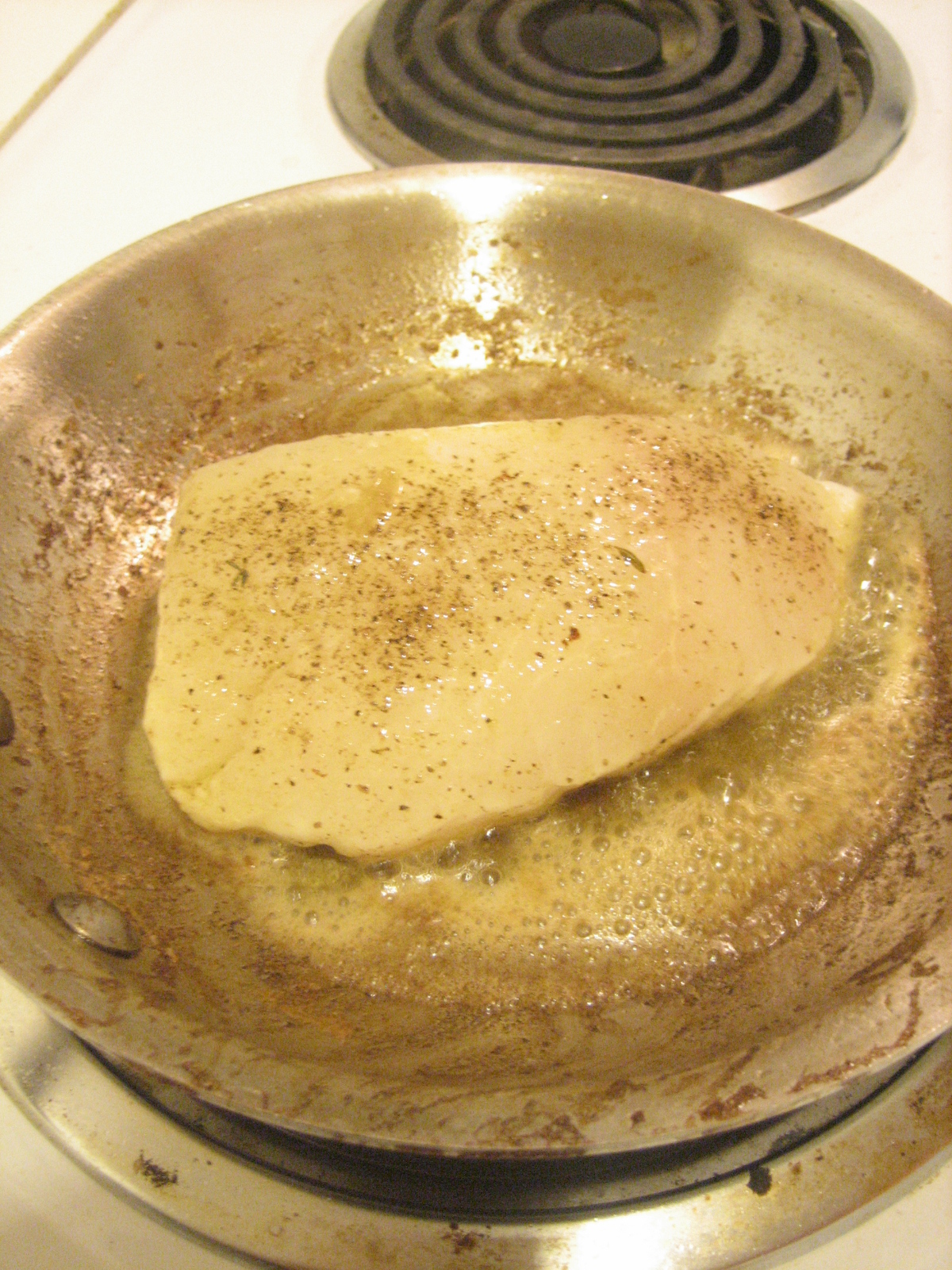 Now according to PW, you’re to leave the fish alone completely. I’ve always been really bad at this step, so I’m just going to admit it: I totally used my fish spatula to peek at the underside and see how the browning was coming along. It helped me to determine when to throw the whole pan in the oven, which I did after about 3 to 4 minutes. I left it in the oven for an additional 5 to 6 minutes, then pulled it out, and let it rest. You’d never know it, but fish, like any other meat, must rest after you cook it.

Once the filet was ready, I laid it to bed on a small, soft pillow of flat leaf parsley (I’ve grown to really love eating it as if it were any other green), then spooned the grapefruit/fennel salsa all around. Lovely, light, but satisfying. I have to tell you, this isn’t really a meal a lot of husbands will like. Too spa-inspired. But with a glass of rosÃ© — maybe even a sparkling blanc de noirs — it’s perfect for a girls night in. Even if it’s a girls night in for one.

(And, I’m on my way to becoming much better friends with fennel.)