Love the salt. Hate the steam.

A quick lesson of the day for you, and a little backstory to give it some context.

I like to roast whole chickens at home. Why?

b) I can throw it in the oven right when I get home from work, putz around on the Internet and watch back episodes of The Girls Next Door before Joe gets home from the gym, and by the time he is back, showered, and ready to eat, the meat is done-zo.

c) It’s versatile! You can eat the plain roasted chicken, or put it in a soup, or re-purpose it for a sandwich, or even mix it with other fixings to make a chicken salad (a delicious pesto chicken salad comes to mind).

d) You get the bonus of the carcass to make stock. It’s really a win-win situation.

Now for the past year or so, whenever I’ve done anything with a roasted bird, I tried to just salt and pepper it really well, throw it in the oven, and let it be. No herbs or lemons stuffed in the cavity (or “the butt” as Joe likes to say). Nothing lining the bottom of the pan the bird cooks in. I read in both the Bouchon cookbook and in an old issue of Cook’s Illustrated that this only creates steam, and steam is the enemy to crisp skin.

To get super crisp chicken skin — and I mean papery, crackly, seems to shatter when you stick the thermometer through it skin — you need to salt the heck out of the skin, and remove any element in the oven that creates steam. End of story.

I like to wash and dry the entire bird, then pat it really dry with a paper towel. Again, what does residual rinse water, plus a scorching hot oven equal? STEAM. 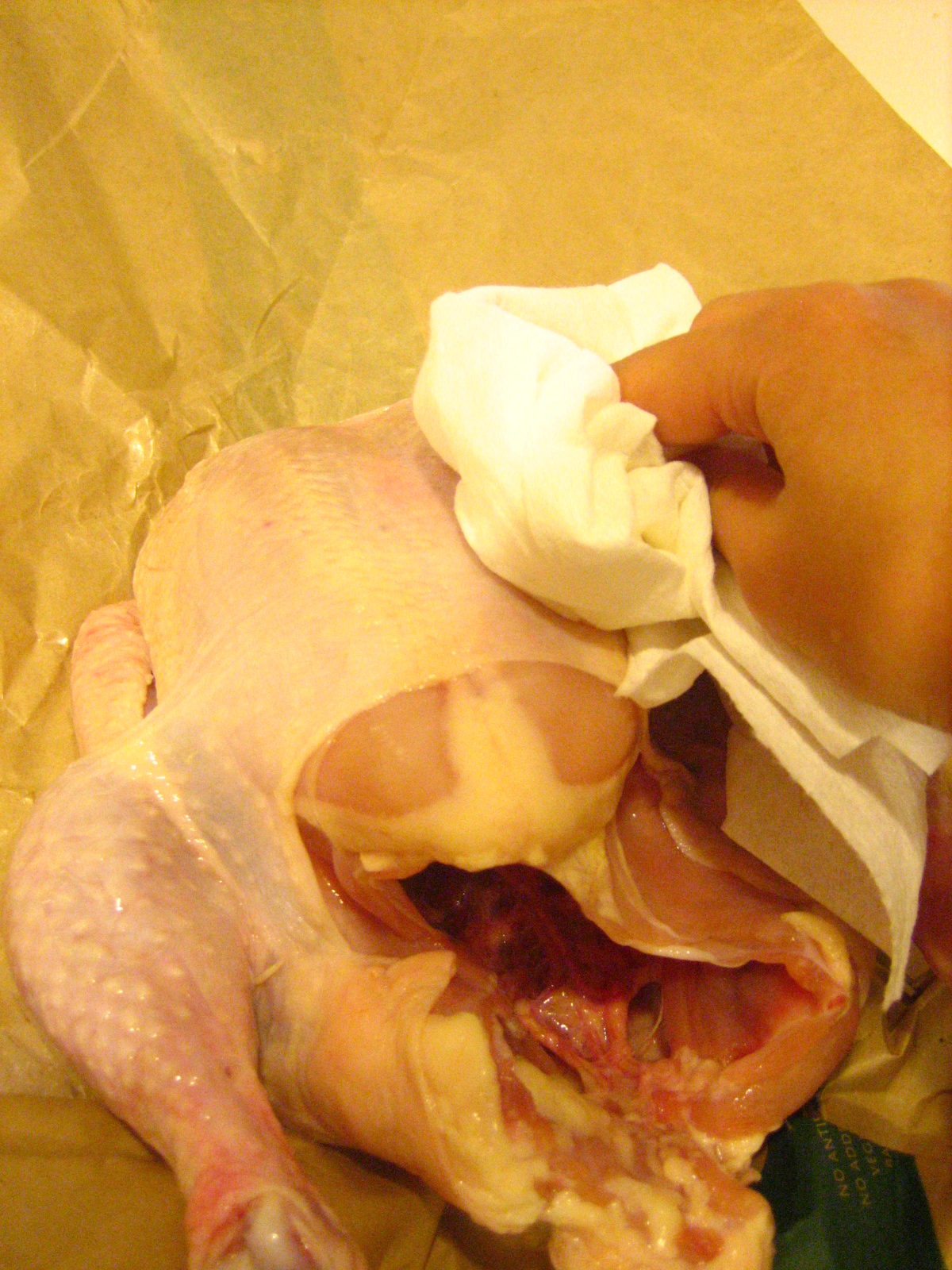 Then, salt the heck out of that sucker. Don’t be shy. Get it all over the breast and the top part of the legs, then do this number on it: 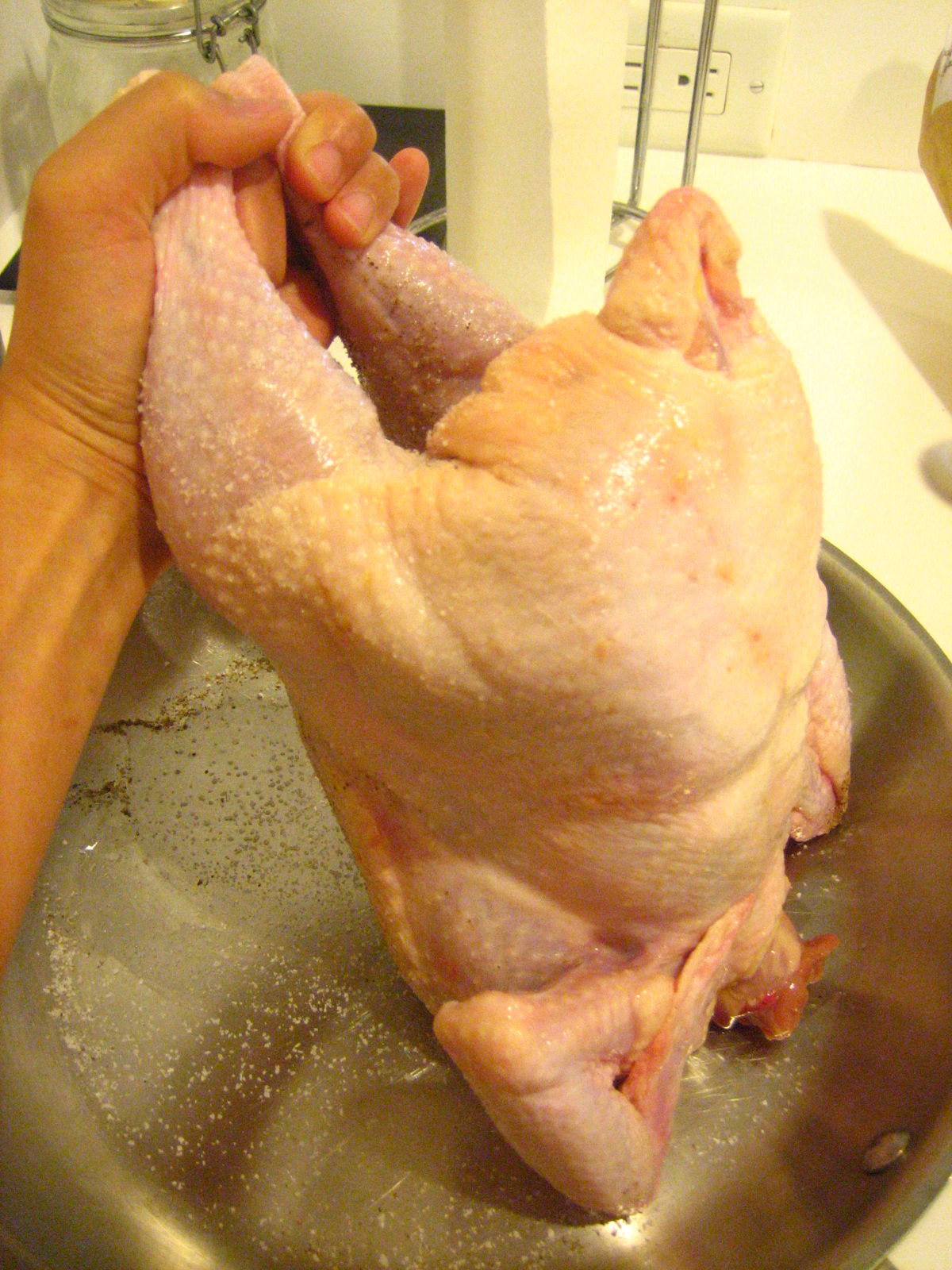 I had an Italian butchery chef in culinary school that would always manhandle the chickens, and would talk about dealing with them like they owed you money. Now that I’m on season 4 of The Sopranos, I find this immensely funny. I didn’t like that particular chef at all (the dangerous combination of the words “bumbling,” “idiot” and “arrogant” come to mind), but I still think of him whenever I’m popping a raw chicken thigh out of its socket. Heh. Also, I’d like to draw your attention to the pointy chicken butt in the above photo.

ANYWAY, the ideas is to flip the chicken up on it’s head (or where it’s head used to be) to get the back of the legs, the interior of the cavity, and, if you’d like, the chicken back nice and salted.

So, this is how much salt you should be raining on your bird: 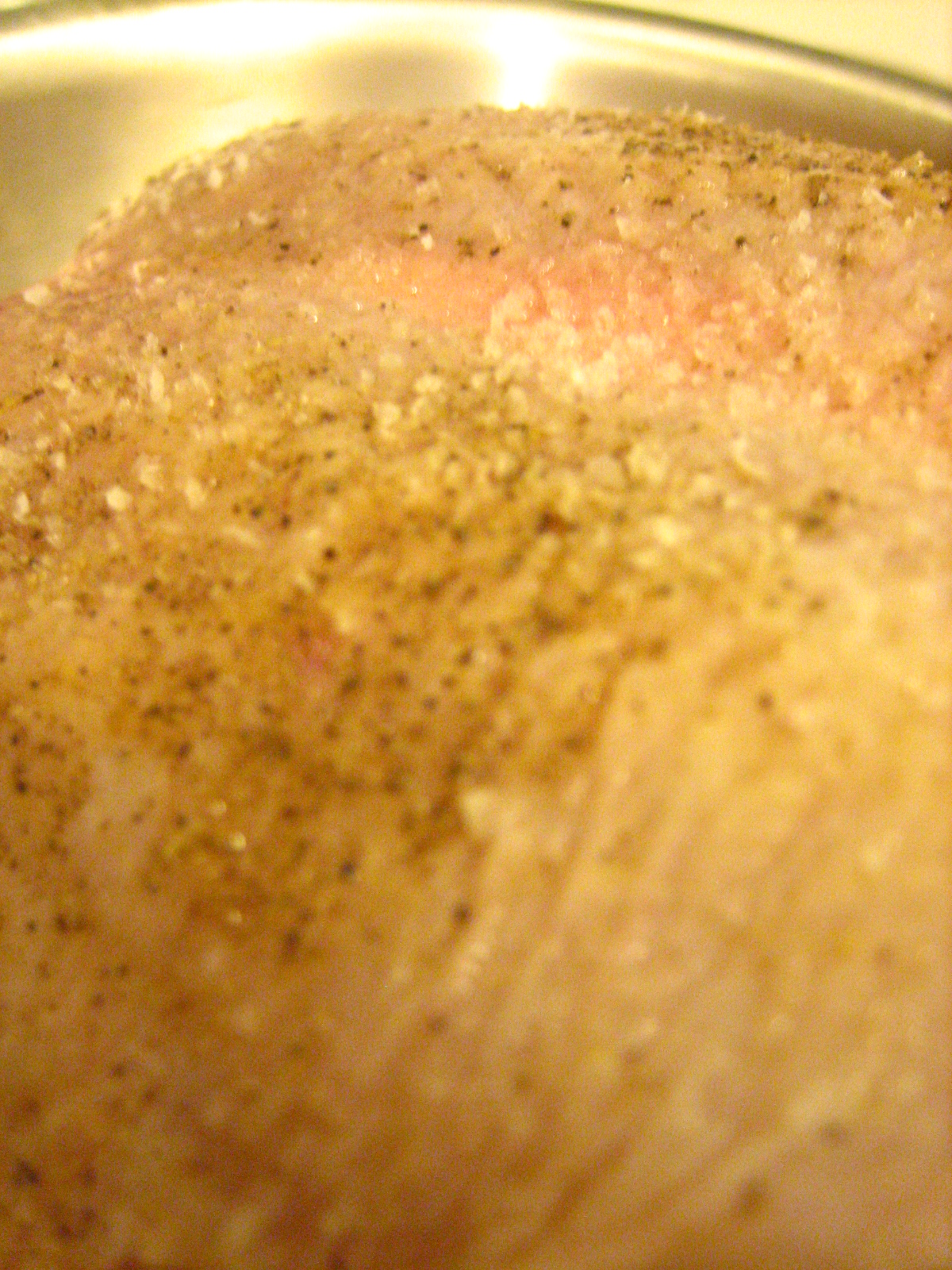 Love the salt. Give the salt a hug. But only if it’s kosher, or from the sea.

Now, DON’T make the same mistake I did last Monday: 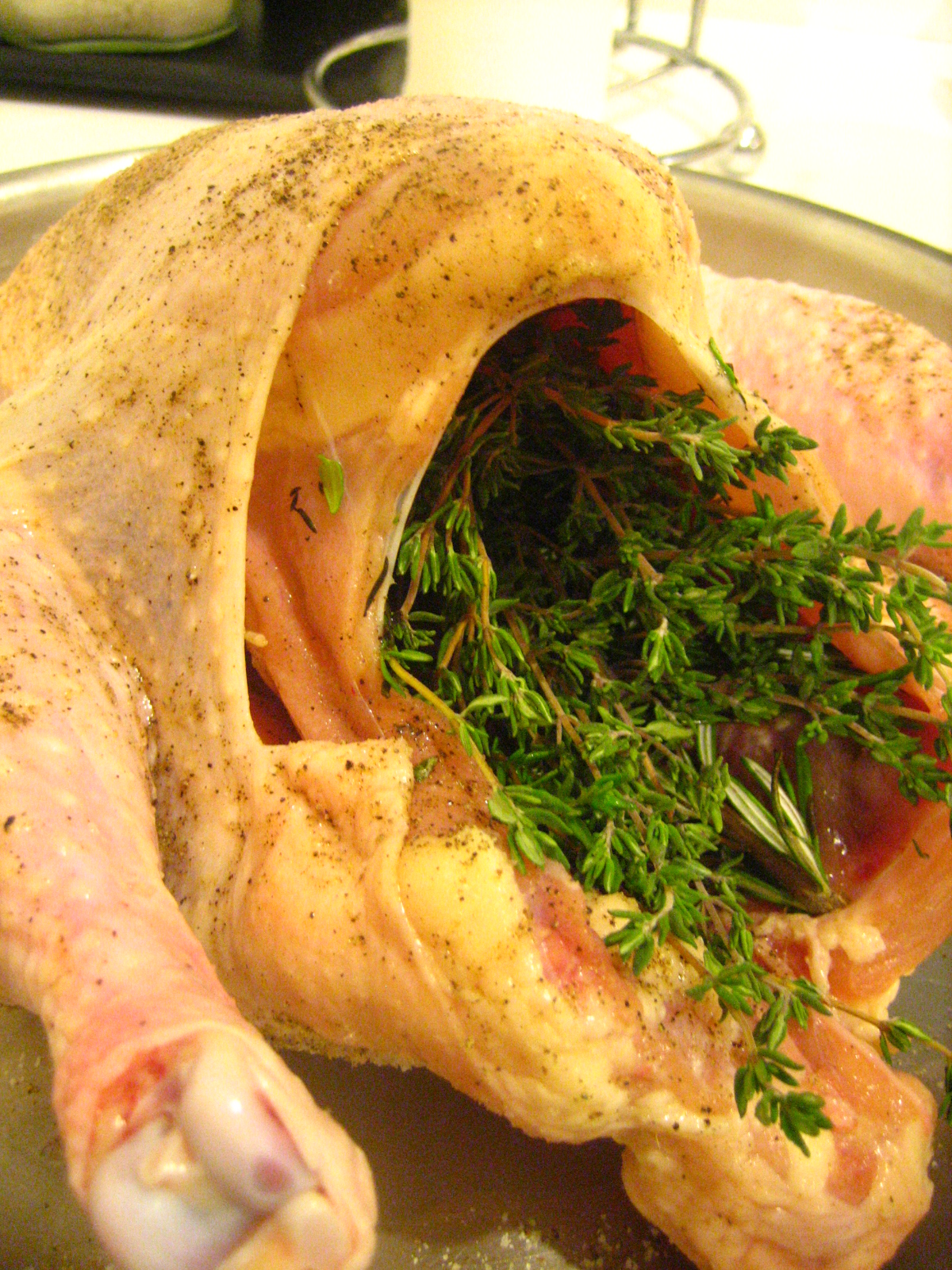 I know. What an asshole. What the hell was I thinking, stuffing herbs into the cavity of the bird? But, I had a bunch of leftover thyme and rosemary from something else, and I didn’t want to waste them, and I HATE throwing things out, and, well, you know where this is going. I thought it would make the house smell good. And it did, but at the expense of the chicken skin. It just wasn’t as good.

If you still want the loveliness that the herbs bring to the roast chicken party, a better method is to wait until the bird is completely cooked. Pull it from the oven, then sprinkle a bit of minced thyme over the whole thing. After that, let the meat rest. The thyme will still warm up and become aromatic on top of that piping hot chicken, but won’t burn or cause steam as it would if you left it on there during the cooking process. Plus, the vibrant green looks pretty on the bird.

Lesson learned. Don’t mess around with all the fancy stuff! Keep all traces of steam out of the oven, salt the bejeebus out of that bird, and you will have chicken skin so crisp you’ll have to stop yourself from peeling the entire layer of it off the breast and eating it while standing over the stove, oven mitt still gloved on your hand. Not that I’ve ever done that or anything.