I still remember the heat

Though I grew up in Austin, my grandmother lived only a short drive away from us in the outskirts of Houston. So as a kid, my parents would often unload me let me spend long swaths of time at her house in the summer — sometimes three weeks or even a month. She would take me to Toys-R-Us and made sure to always have those green bottles of Coca-Cola  stocked in her refrigerator. Sometimes, we’d make homemade ice cream out on her backyard patio; the patience required for our cool treat was made all the more unbearable by the thick Texas heat. I yearn for those days now.

Every morning, my grandmother and I would wake up early, and brew a pot of coffee. It’s funny that I’m not much of a coffee drinker as an adult, and I wasn’t really then either — I think I just loved the smell and the ritual of brewing it. She would pour me a very small teacup full, and I would dump in spoonfuls of sugar and a heaping of milk that turned it into a light caramel color. We would go outside in our pajamas, and sit on a small wooden bench next to her swimming pool. As we sipped the morning brew, we’d sing songs and repeat nursery rhymes to each other. “Zippity-Doo-Dah” was a daily must.

And during my summer visits, we’d often drive down to the coast, to Galveston, about an hour from her house. She had a gentleman friend who was in possession of a very fine double decker boat, which was a joy to take out on those muggy, humid summer days. My grandmother still has a picture of me on the boat one summer, a too-big bright orange life jacket strapped tightly across my chest — I must be about 6 or 7 in it.

On these trips to Galveston, we would always stop at a small restaurant right on the beach, whose name I can no longer remember. But, I do remember that it wasn’t much to look at from the outside, and that it was built right over the water on stilts, with a large deck area in the back — much like the picture above. It was sandwiched between two souvenir shops, replete with “I went to Galveston and all I got was this lousy t-shirt” type gifts. But I never held that against it.

I remember the restaurant mostly for its gumbo. We’d sit out on that back deck, ignoring the oppressive summer heat and relishing the salty air, inhaling bowls of seafood gumbo with saltines and washing it all down with big, sweating glasses of iced tea. No matter the time or place, a day spent near or on the ocean always makes one hungry.

The roux in the stew was black as night — a sign of true devotion to the dish, for creating a base that dark requires at least an hour of work, cooking time for the rest of the ingredients not included. I don’t know what got me thinking about the gumbo I used to eat there — Maybe it was the spicy zing of the gumbo that would burn the back of my throat and numb my lips for an hour after eating it? Or the rich, nutty flavor of the base? — but last weekend, I had a big hankering for it. Joe was game for whatever I wanted to make for dinner, so when I floated “gumbo,” and he didn’t pass, I couldn’t either.

I didn’t have the patience to take my roux to black (read: I got hungry), but I did get it to a nice chestnut brown color after about 45 minutes. Unfortunately, the great color got diluted a bit when I added light chicken broth (I didn’t have any homemade dark chicken stock on hand this time), but I was happy to find that the nutty flavor of the roux still held its ground in the finished gumbo.

A little background on roux. Simply put, roux is a mixture of cooked flour and fat used to thicken things. For lots of sauces, soups, and stews, you start with a roux, and then after adding some other liquid (water, stock, wine), the mixture will thicken up nicely. And make no mistake — a sauce thickened with roux feels different in the mouth than a sauce thickened with cornstarch. It’s because of the fat!

When you first mix the flour and fat together, it needs to be stirred for a minute or two so that the floury taste cooks out. Soon after, you’re left with a blonde roux. Cook it for a while more, you might have a dark blonde or even light brown roux. Keep cooking and cooking and cooking it, and you’ll end up with a brown roux. You can even take your roux all the way to black (but know when to stop — after black comes BURNT), but the key is to continue stirring the mixture over very low heat. If you don’t stir, the roux goes from blonde to BURNT with no in between. Cooking it slowly allows the roux to toast and become very nutty — it is liquid gold in a pan. Stirring it for the long amount of time it takes to get roux the right color is a true labor of love. Your heart really has to be in it for it to go off without a hitch, so be prepared to invest a little time into your dish. And be careful! Though water in the fat and flour will initially cook out of the roux, causing bubbles, it eventually makes no movement at all which is misleading. Darkened roux is culinary napalm. That stuff is HOT.

Here are a few shots of my roux progression: 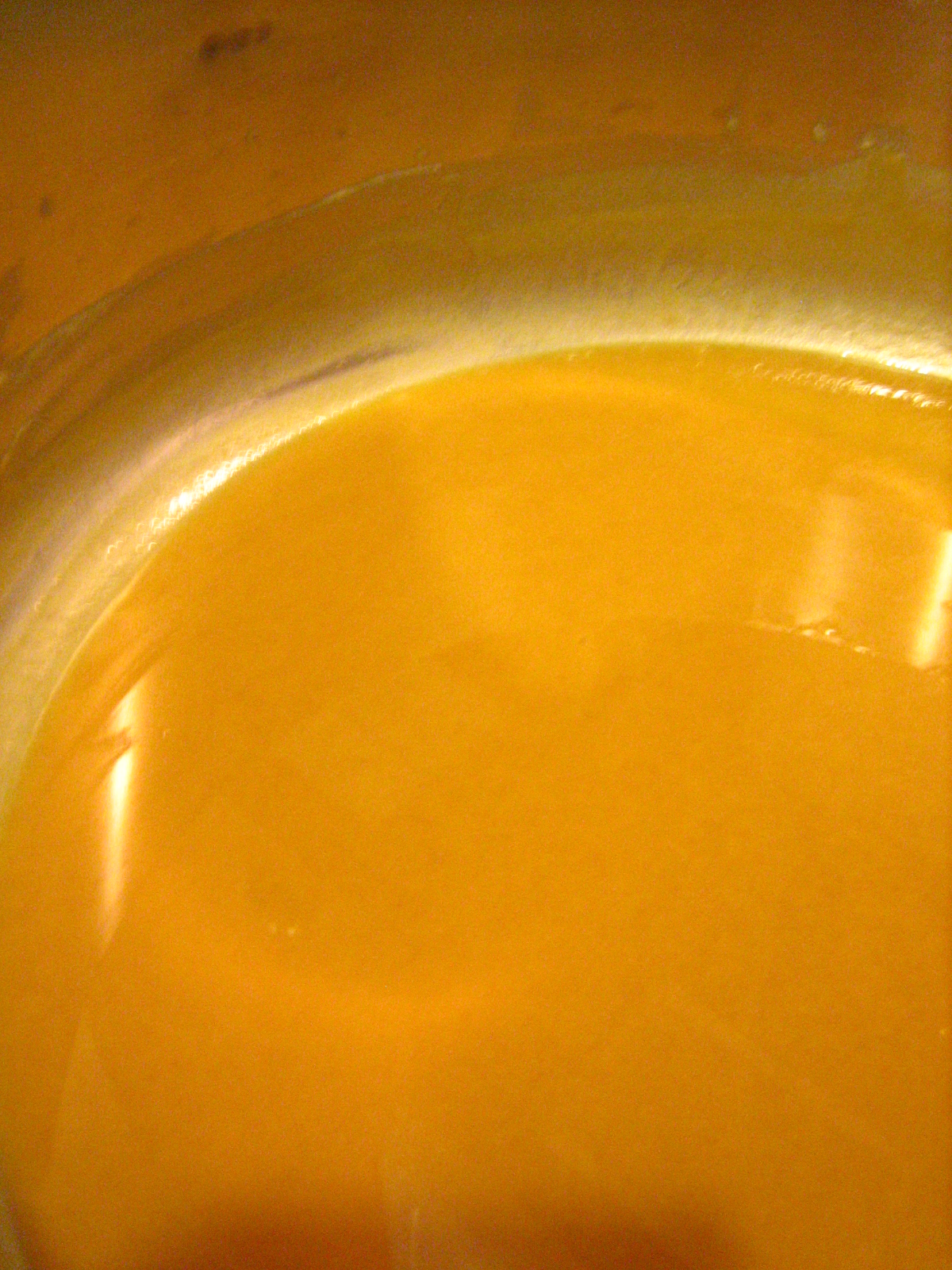 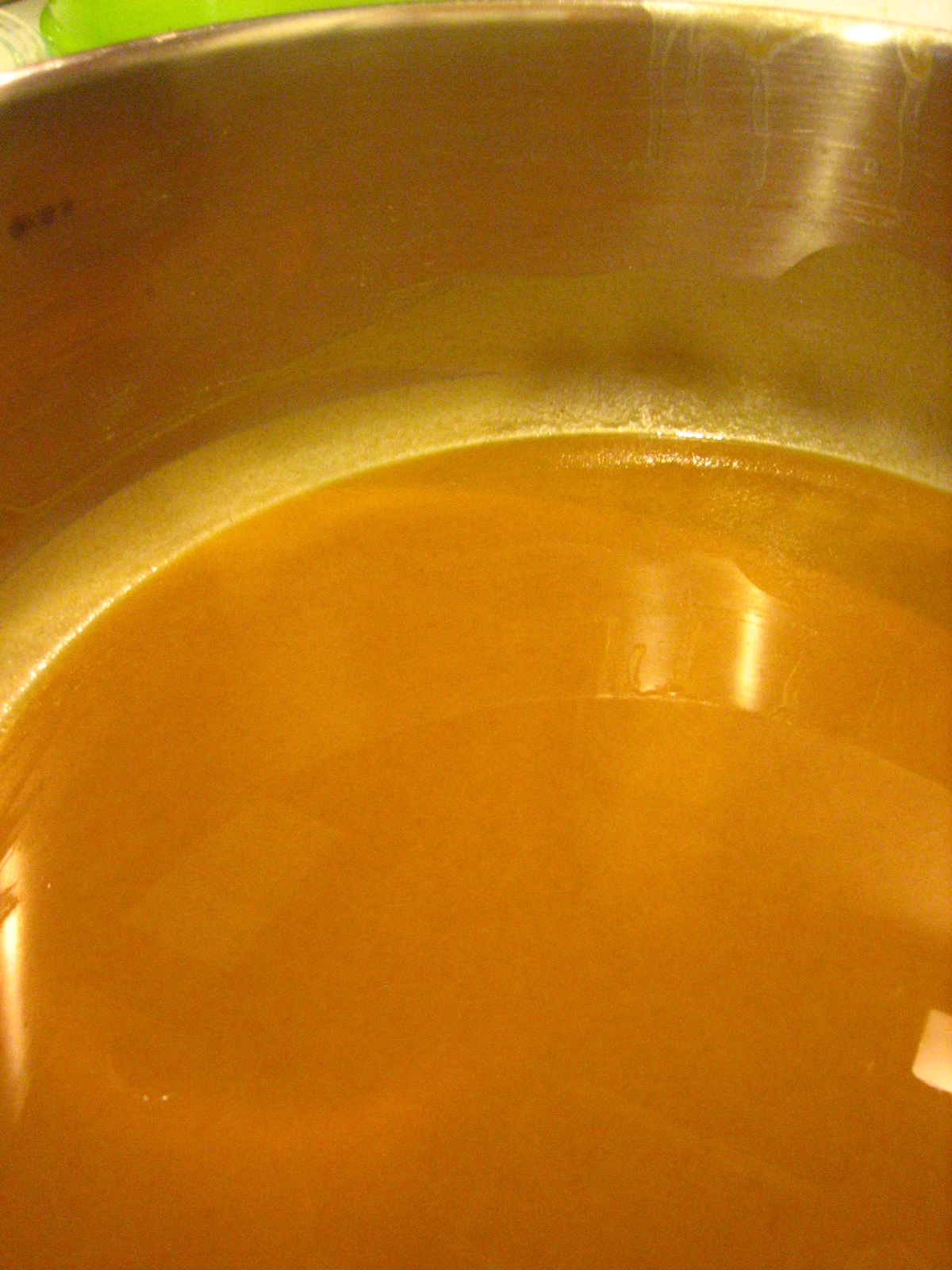 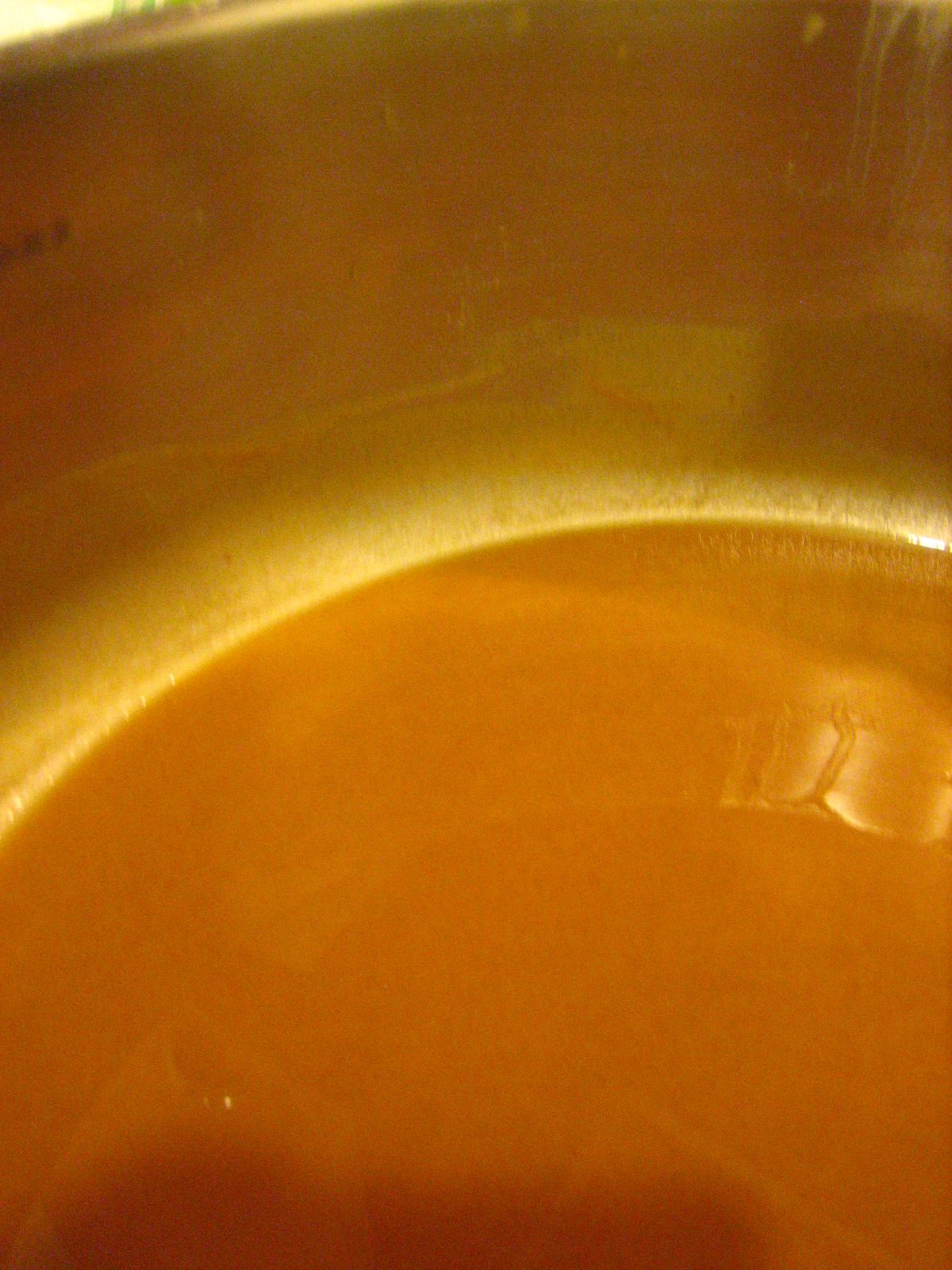 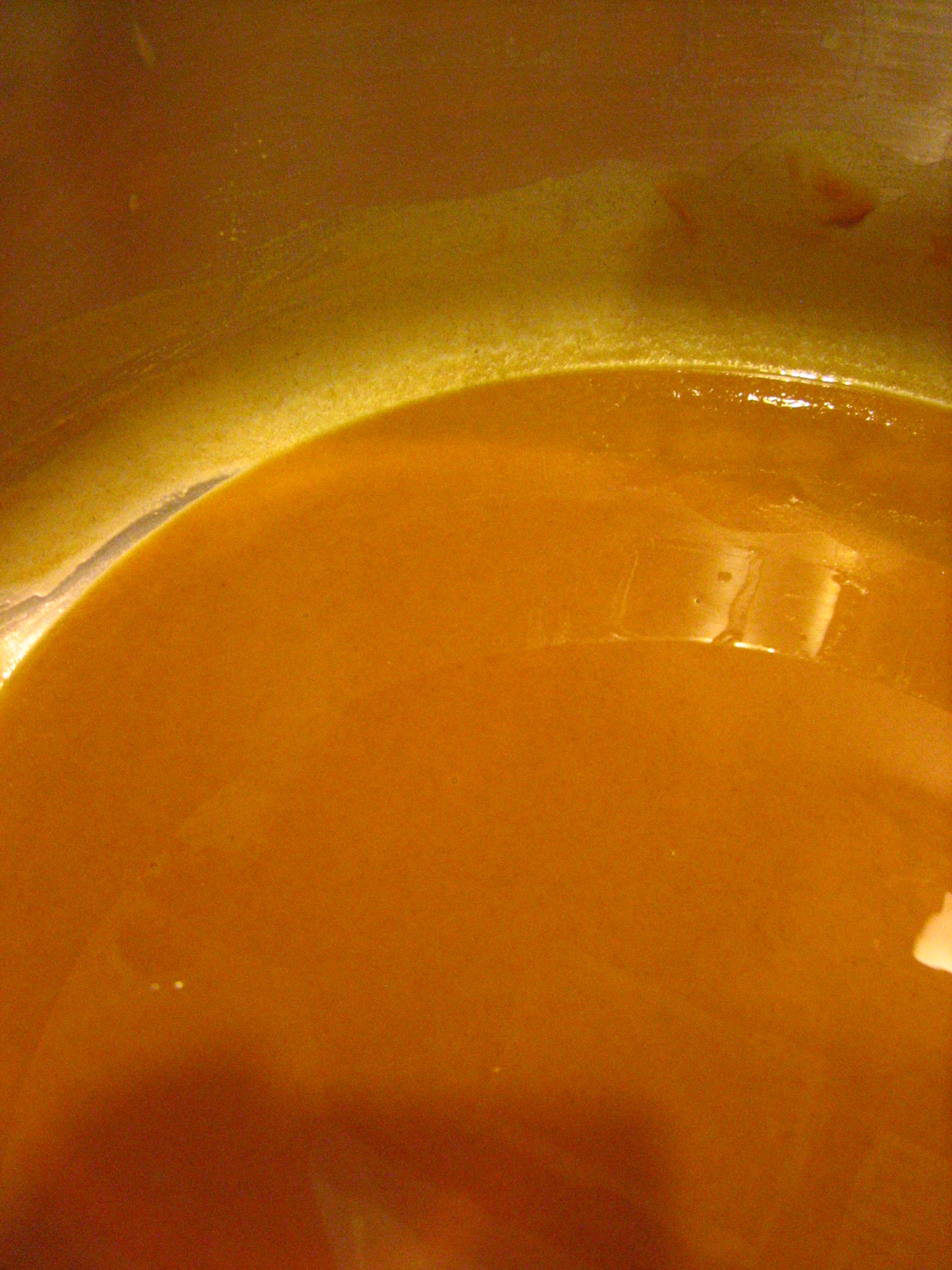 Meh. Maybe you can’t really tell the difference here (my point-and-shoot isn’t the best. I’m working on getting something better). I promise you could see it in real life — I get really excited about these things, and made Joe come over and look at and smell the differences every few minutes (he’s so good to me!).

Once the roux was ready, I poured in a mixture of vegetables: the Creole trinity (with some red pepper added), and a random celery root I had lying around. The mixture almost immediately thickened up, as what little water was on the veg made friends with all that roux. This mixture also contained some paprika, dried thyme, dried oregano, LOTS of cayenne, onion powder and garlic powder. After this cooked for a bit, in went the chicken broth, some diced chicken thighs, andouille sausage and the okra. Last to go in was the shrimp, so it wouldn’t over cook.

Not as dark a roux as I really like, but good enough for a hungry girl on a Sunday night. Here’s what it looked like finished — with a bit of brown rice (I was out of white, and this was healthier anyway), a dash of parsley, and a sprinkling of filÃ© powder: 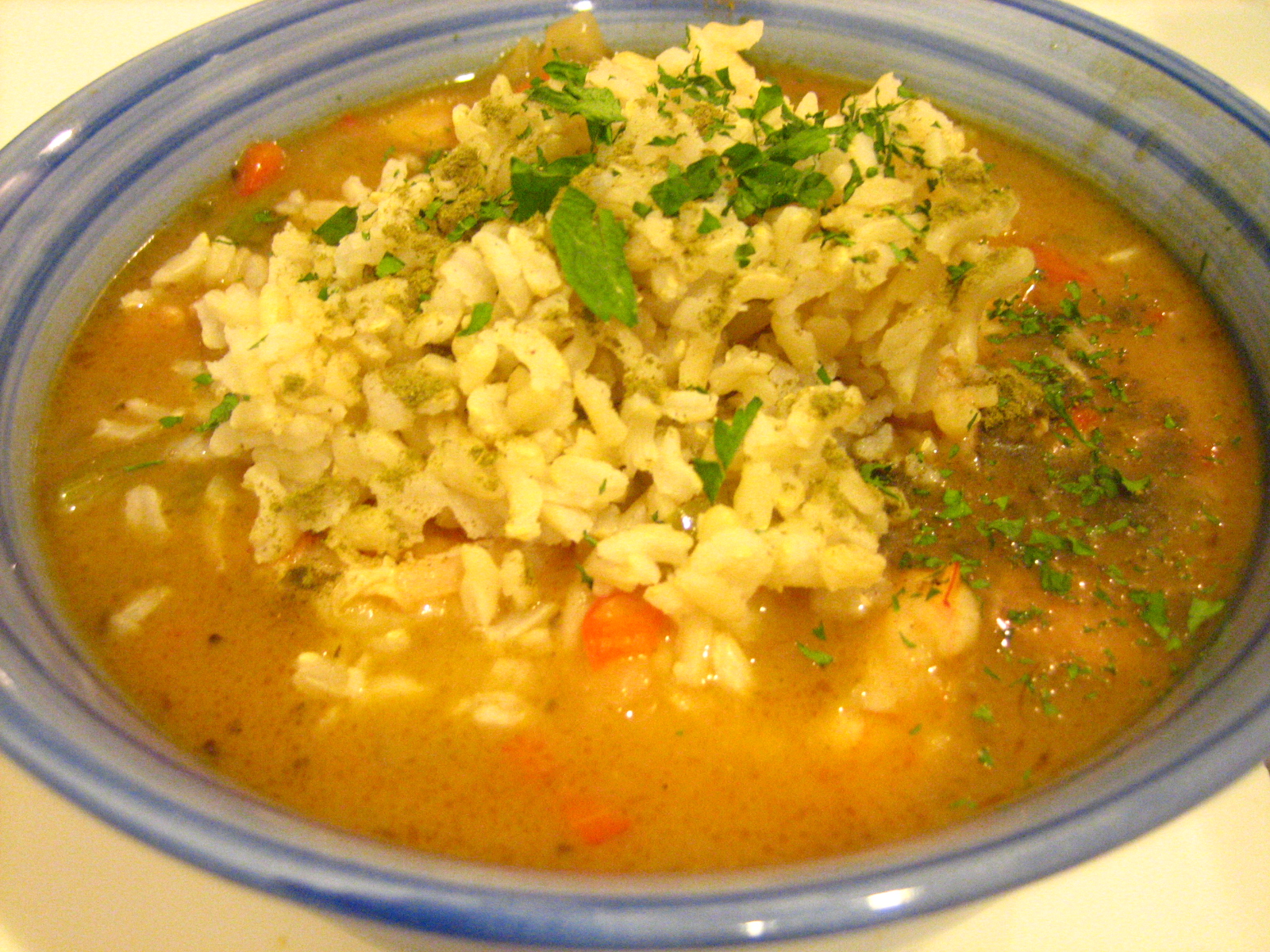 It took me back to the Galveston beach circa 1990, that’s for sure. The best part is I made enough that I’ve been noshing on it for subsequent lunches and dinners, too (and saving money for France at the same time! Everybody wins!).

Sigh. You know, I don’t miss Texas, but I do. Does that make sense?