When I was in high school, I took Spanish all four years. I got to be pretty good at it — a mixture of my fascination with foreign languages, and being immersed in it every day for at least an hour. Of course, after not using it during college, I can no longer speak or listen to conversaciones en EspaÃ±ol with much ease. It’s true what they say: when it comes to language, you gotta use it or you lose it.

Joe took German, and he doesn’t seem to remember a word of it. All I know is, he says he can’t stand the movie Back to the Future, because they watched it incessantly during his German classes in high school (the English version, no less). I have no idea how he managed to do so well on his AP German exam, because if I show him a German word in a book, or hear something on TV, it’s like he’s trying to translate Ancient Greek.

But when it comes to Oktoberfest, Joe always remembers.

At work this morning, he sent me a note on Gchat asking about dinner. My only stipulation was no salad for a main meal. “Latkes!” he suggested, “With sausage and applesauce and sour cream.”  Totally, random, right?

“I’m not making latkes,” I told him — too many bad memories of being forced to make perfect looking potatoes rÃ¶sti in culinary school, “but why the sudden hankering for German food?”

“I was just thinking that since it’s Oktoberfest we should do something.”

That was all that needed to be said. I had just the ticket. 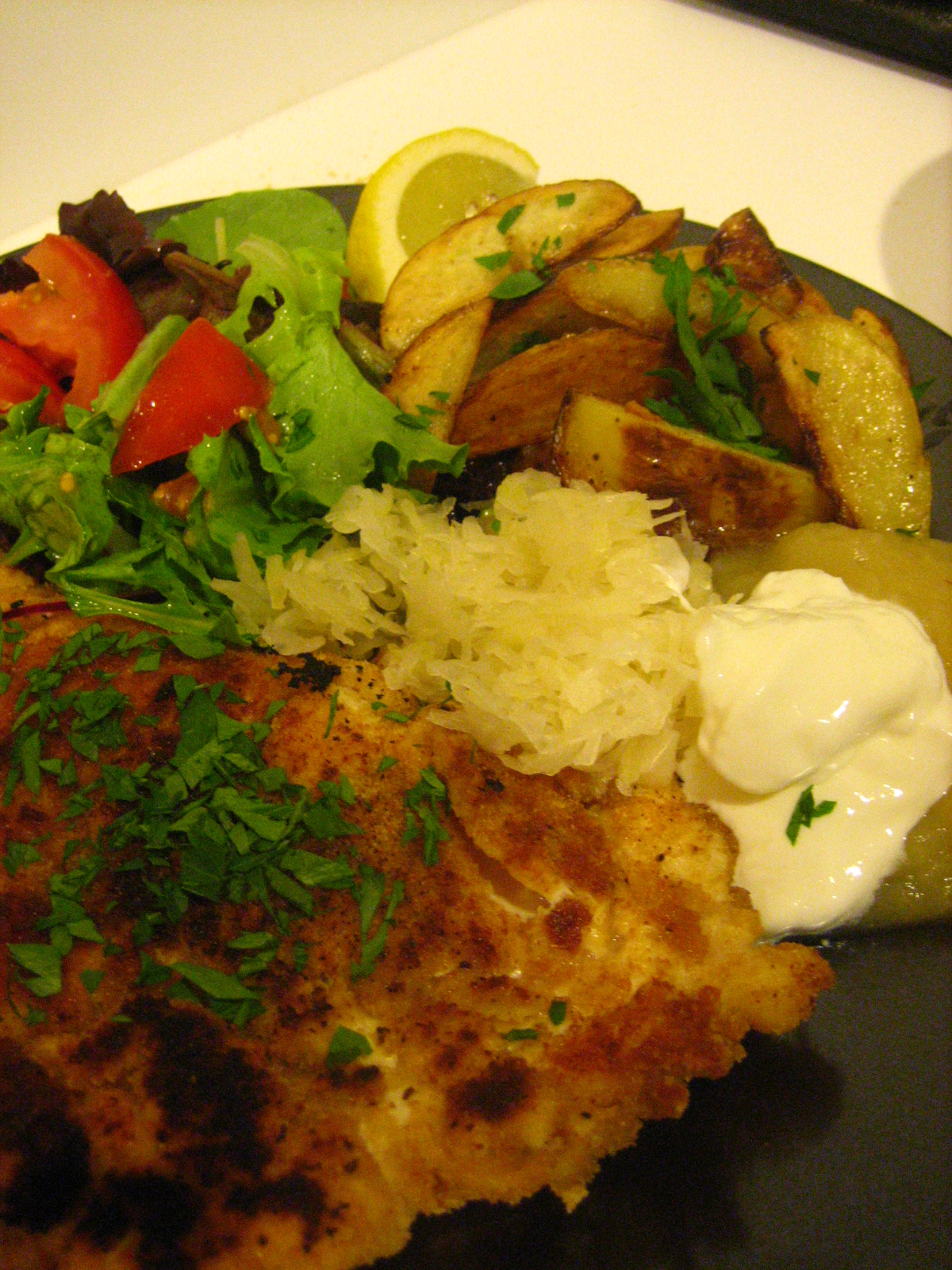 I give you chicken schnitzel, with apple sauce, sauerkraut, and sour cream; Yukon gold potatoes fried in duck fat, schmaltz and brown butter; a simple green side salad; and of course, BEER.

It sounds like a lot of work, but this feast was actually pretty easy to put together. I purchased the sauerkraut, apple sauce, and (obviously) sour cream pre-made. I like Claussen’s sauerkraut — it’s super crisp and doesn’t taste flabby or like it’s soaked in too many preservatives. The duck fat was something I bought months ago, and kept frozen in the freezer. Whenever we make potatoes, I use a little bit.

If you can believe it, bone-in chicken breasts had just been put on sale at the market by my office for $1.99 per pound, so what I thought would be the costliest part of the meal ended up being very affordable.

And instead of using store bought breadcrumbs (ugh — have you ever looked at the ingredient list for dry bread crumbs? Since when did breadcrumbs need 50 ingredients?), I bought some locally made little melba-style toasts, which were all-natural and had no partially hydrogenated oils or random additions of corn syrup. A quick whirl in the Vita-mix and I had the perfect style of breadcrumbs for my schnitzel.

What can I say? This was so, so yummy. I have the complete recipe — with lots of pictures — right after the jump.

Oktoberfest runs through October 4 (which is next week — hey, where’d September go?!?!). If I were you, I’d make a German themed dinner while you can. All you need to be able to say is kÃ¶stlich. Slice the Yukon gold potatoes in half, and then into wedges. Add the potatoes to a large pot of cold water, season prodigiously with salt, then bring to a simmer. When the potatoes are just beginning to give you when you poke a fork into them, drain them and set them on a towel-lined plate to drain.

As the potatoes are cooking, add the duck fat, butter, leftover chicken skin from the chicken breasts, and garlic to a large saute pan. Put the pan over low to medium low heat, so that the butter browns (it will smell nutty and wonderful), the fat will render from the chicken skin, and the garlic flavors the everything. Do not let the butter burn.

Once the potatoes have drained, bring the heat of the saute pan up to medium. Add in the potatoes, season with salt and pepper, and cook until they have become very browned and crisp on the outside, around 10-15 minutes. Shake the pan occasionally, and use tongs to flip the wedges as needed so all the sides brown. While the potatoes cook, prepare your breading station. Leave the beaten egg in its shallow bowl; put the flour onto a large plate and the breadcrumbs on either a large plate or another shallow bowl, and be certain everything is well seasoned. Remove the rib bones and wishbone from the chicken pieces, then lay them between two sheets of plastic wrap or wax paper. Using a mallet, pound the breasts out until they are about a half inch thick — or thinner, if you’d like. When you’re pounding, the key is not to hammer the meat as hard as you can to flatten it, but rather to push down and outward with the mallet, so that the meat becomes thinner but isn’t completely pulverized. Put a non-stick skillet over medium high heat, and add in the canola oil

Once you have mallet-ed the meat (heh) to a desired size, gently dredge it in the flour until it is lightly coated. Shake off any excess flour, then, dredge the meat in the egg. Allow the excess to drip off, then dredge it in the breadcrumb, patting lightly to ensure adhesion and that each part of the meat is covered. Repeat with the second breast. 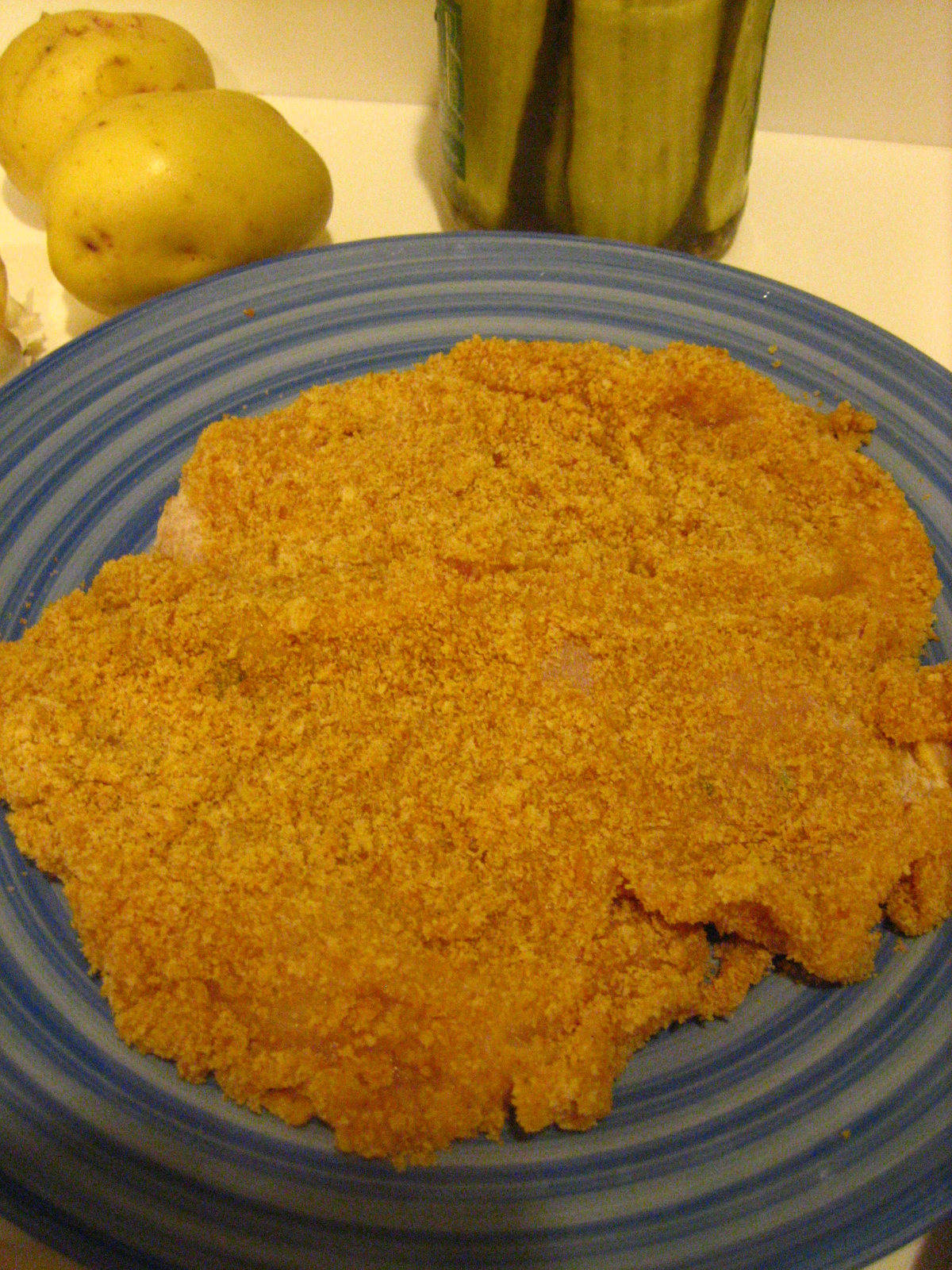 Add the chicken to the hot non-stick pan, and allow to cook. It will only take a few minutes per side, as the meat is very thin. Flip it once the first side is golden brown and crisp. If you poke at the meat with your finger and it feels hard, not mushy or springy, you know it is done.

The meat can rest for a few minutes if your potatoes still need time to brown. Otherwise, plate up the chicken with a bit of sour cream, applesauce, sauerkraut and some freshly chopped parsley. Add a little green salad on the side, the duck fat fried potatoes, and a wedge of lemon to the plate. We drank it with a Sam Adams Oktoberfest.