Hang around Joe long enough and you realize that he has integrated many great quotes from South Park into everyday life. A classic example: 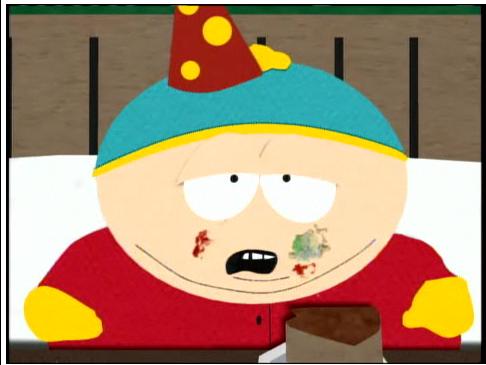 [Click on the picture for video. I initially embedded it, but it had automatic playback. Didn’t want to surprise any of you at work!]

Did “just one drink after work” turn into an all night binger where you somehow ended up playing beer pong at the perennially awful Bar None until midnight with your 35 year old co-workers — and you have to wake up at 4:30 am the next day?

Get super sunburned in Cabo?

“Pie” is the perfect catchall word to denote whatever we’re talking about at any given moment. Of course it can also be used in the reverse. (Ex: “More red-wine-and-Sopranos pie, please.”

The point of me telling you about all this pie? Last weekend, I made a huge casserole that I named, for lack of a better term, Mexican Pie. You’ll see why in a minute. But I purposefully made such a large amount of Mexican Pie so that I could take it for lunch each day this week, and not have to eat out. As much as I adore the restaurants and cafes on Fillmore, eating around there does get pricey, and I need to be saving all the money I can. For the future, sure — retirement and rainy days and all that jazz — but, also, for FRANCE.

Yes, faithful reader, the big announcement is that VMAC + Joe are planning a trip to France, likely in the early summer of 2010. Where to? Oh, you know. A few days in Paris, a day trip to Versailles, and a good solid block in Provence (I’m looking at parking it in Aix, but does anyone have any suggestions?) where we will eat pissaladiÃ¨re and drink rosÃ© until our heart’s content. It is likely we’ll discover some old, derelict vineyard with a matching farm house for sale, and enter into our own version of Under the Tuscan Sun. Minus the divorce part — although, by the end of the renovations, that would be likely.

Joe and I are good about taking at least one “real” vacation a year, but we have been talking about France for years now and I am more than excited that we have decided to do it. It’s the Mothership, the MotherLand, a gastronomic Holy Place. I want to jump out of my skin every time I think about it. Which makes it much easier to say “No, thanks” to frivolous spending, and much easier to put a little extra money in the Fun-01k — that’s the savings account I have created for this trip. I am also going to start teaching myself French and/or taking some classes at a local language school. That should make for some interesting posts. (Ben? Any help here?)

So in a way, the Mexican Pie is a celebration of all things French, even though the ingredients aren’t really French at all. To prepare the dish, I made a few cups of short grain brown rice (fiber, you know — gotta keep things moving); a filling of several types of vegetables; and a sauce of simmered tomatoes, chipotle peppers, the adobo sauce that the chipotles came canned in, and herbs (or should I say, herbes). The entire thing was topped with two types of cheese. It is one of those dishes that only gets better the longer it sits — both because the flavors develop and marry, but also the ingredients all meld together texturally and the casserole holds up beautifully. I’ve enjoyed it two days in a row for lunch, and I can’t wait to eat it again tomorrow. You can’t ever get sick of Mexican Pie if it equals dix jours Ã  deux semaines in France.

In a small sauce pan, combine the can of tomatoes, as many of the chipotles as you’d like (more chipotles = spicier), about half of the adobo sauce, and the herbs, and bring to a light simmer. Season with kosher salt and pepper to taste, and cover. Stir occasionally.

Prepare the rice, fluff with a fork, and set aside.

In a large saute pan or pot, heat the olive oil over medium heat until shimmering. Add in the two types of onion and garlic, and season well with salt and pepper. Cook until translucent and the onion is very soft, then add in the sliced mushrooms. Continue cooking until the mushrooms are moist, cooked through and limp. There should be some fond developing on the bottom of the pan. Add in the poblano peppers, season, and cook until those are softened. Add in the yellow pepper and eggplant, season once more, and stir. Pour in the lime juice, quickly scrapping the bottom of the pan to release any browned bits, and stir. Reduce heat slightly, to medium low. 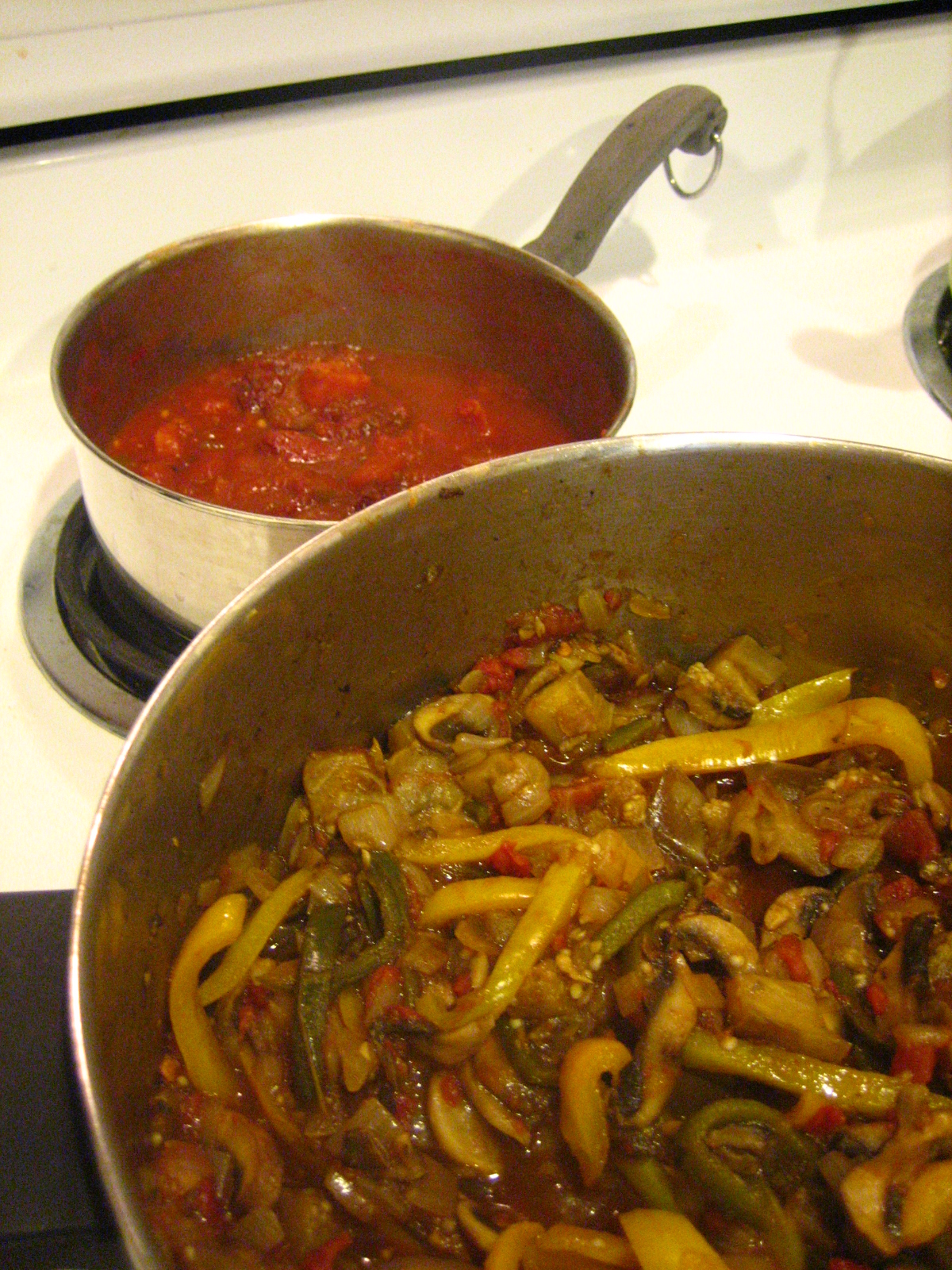 Cook slowly, stirring occasionally until all the vegetables become very soft. Add in a few spoonfuls of the tomato sauce, and stir again. Allow to cook, stirring occasionally. Continue this process — adding in a slight spoonful of sauce and allowing the mixture to cook — until all the vegetables have almost melted together. You do not want the mixture to be soaking with sauce and dripping, but you do want it to be very moist. The sweet spot is when the mixture seems like it might brown on the bottom of the pan, but has just enough moisture not to. You may have a bit of sauce leftover as you finish this process. Preheat the broiler in your oven.

Layer the rice in a large casserole dish so that you have about an inch worth of product at the bottom of the dish (I had to do this in two dishes, since I don’t own a large casserole). Then, layer the vegetables on top of it. 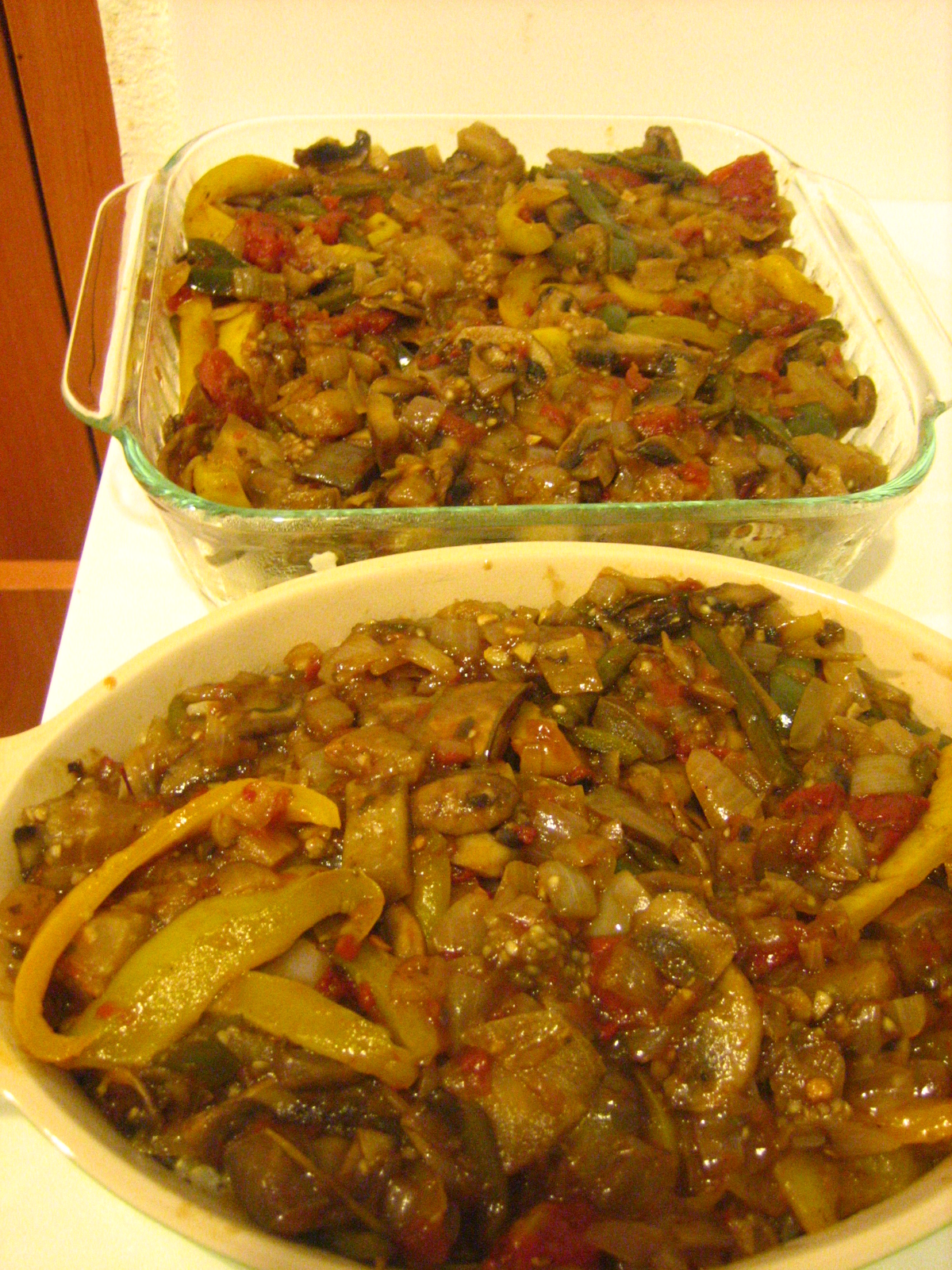 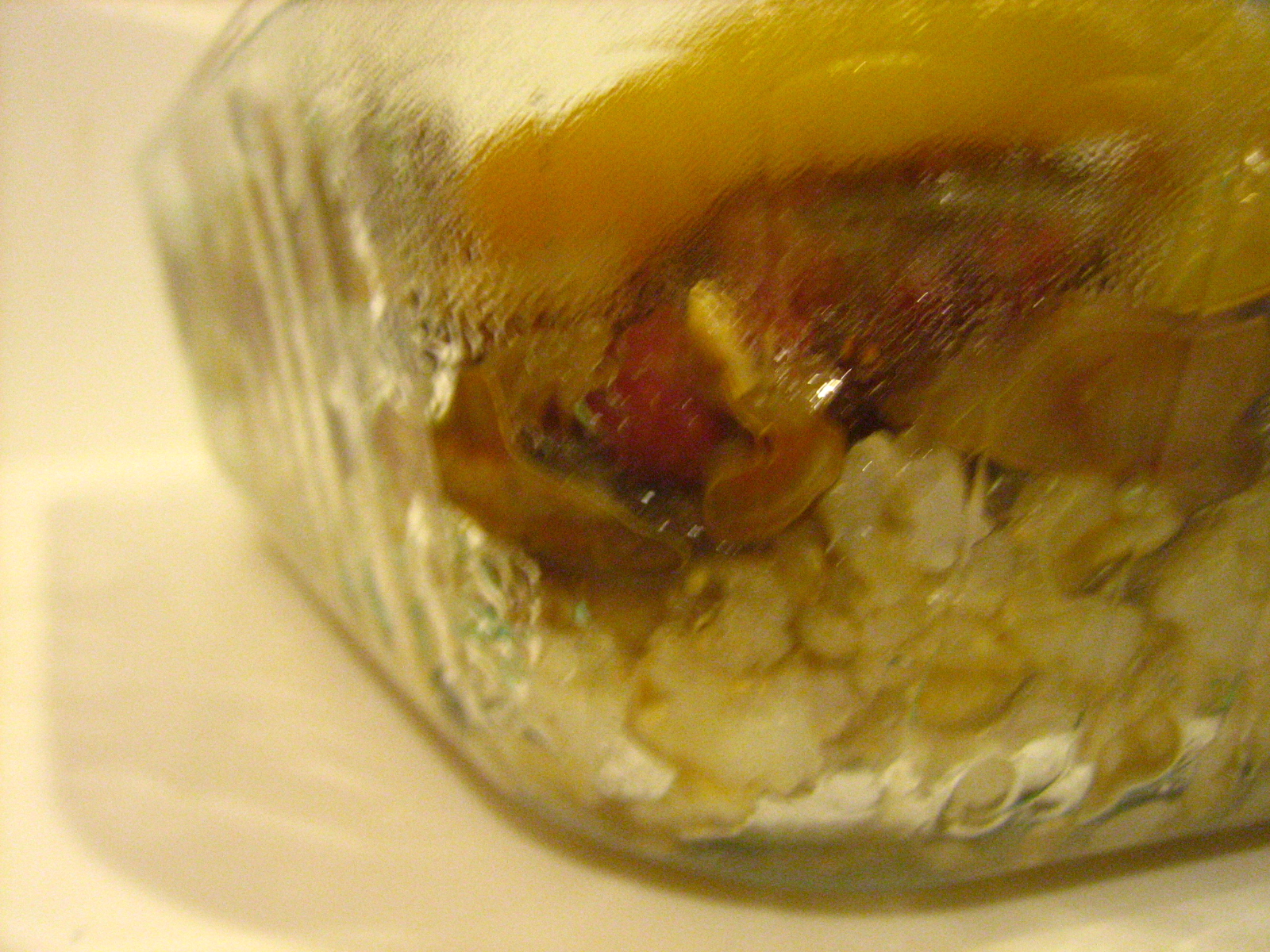 Sprinkle the cheese all over the top, then place the casserole under the broiler for a few minutes, until the cheese has browned and is bubbling. Serve with a few sprigs of cilantro and a dollop of sour cream. 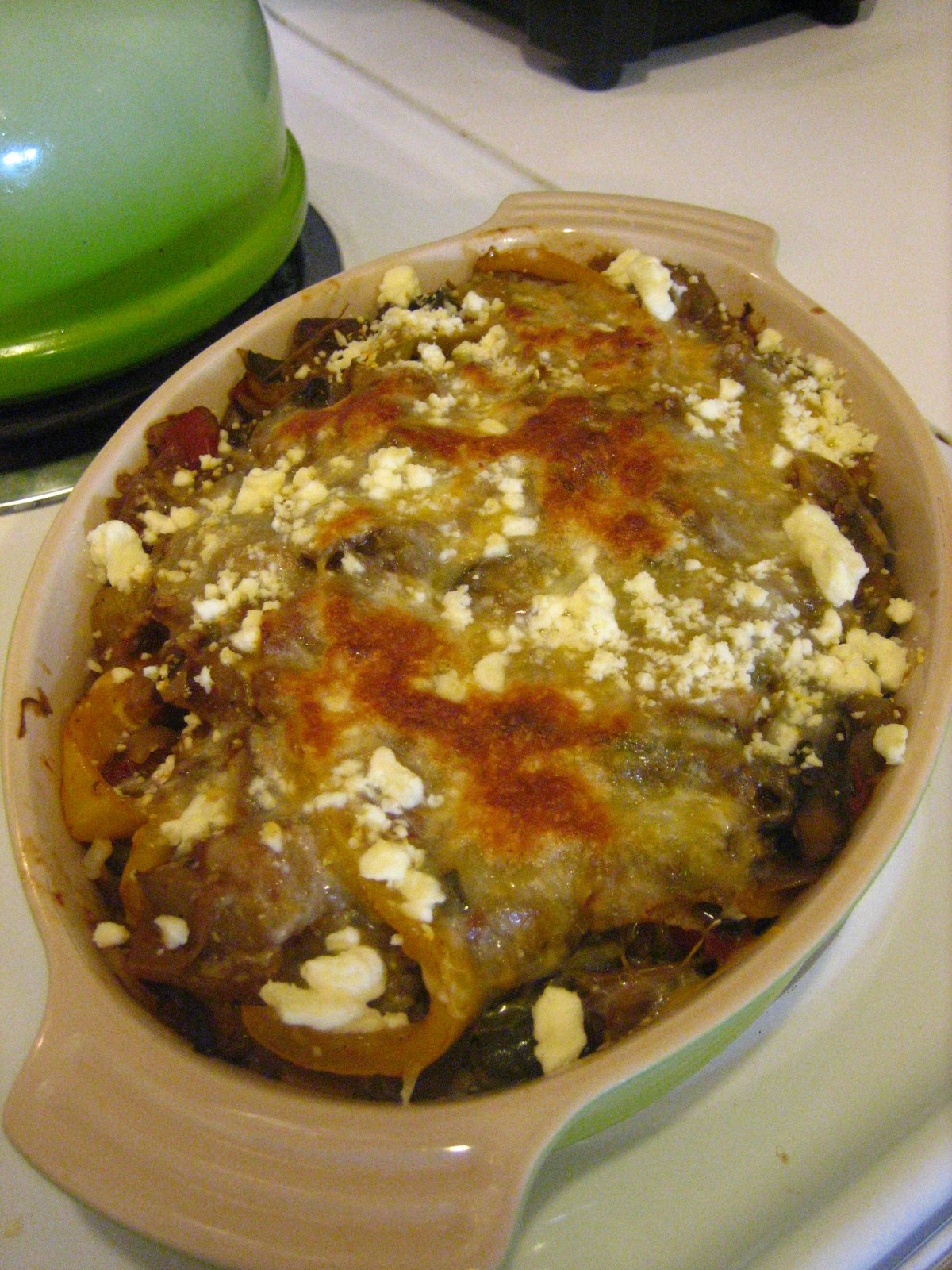 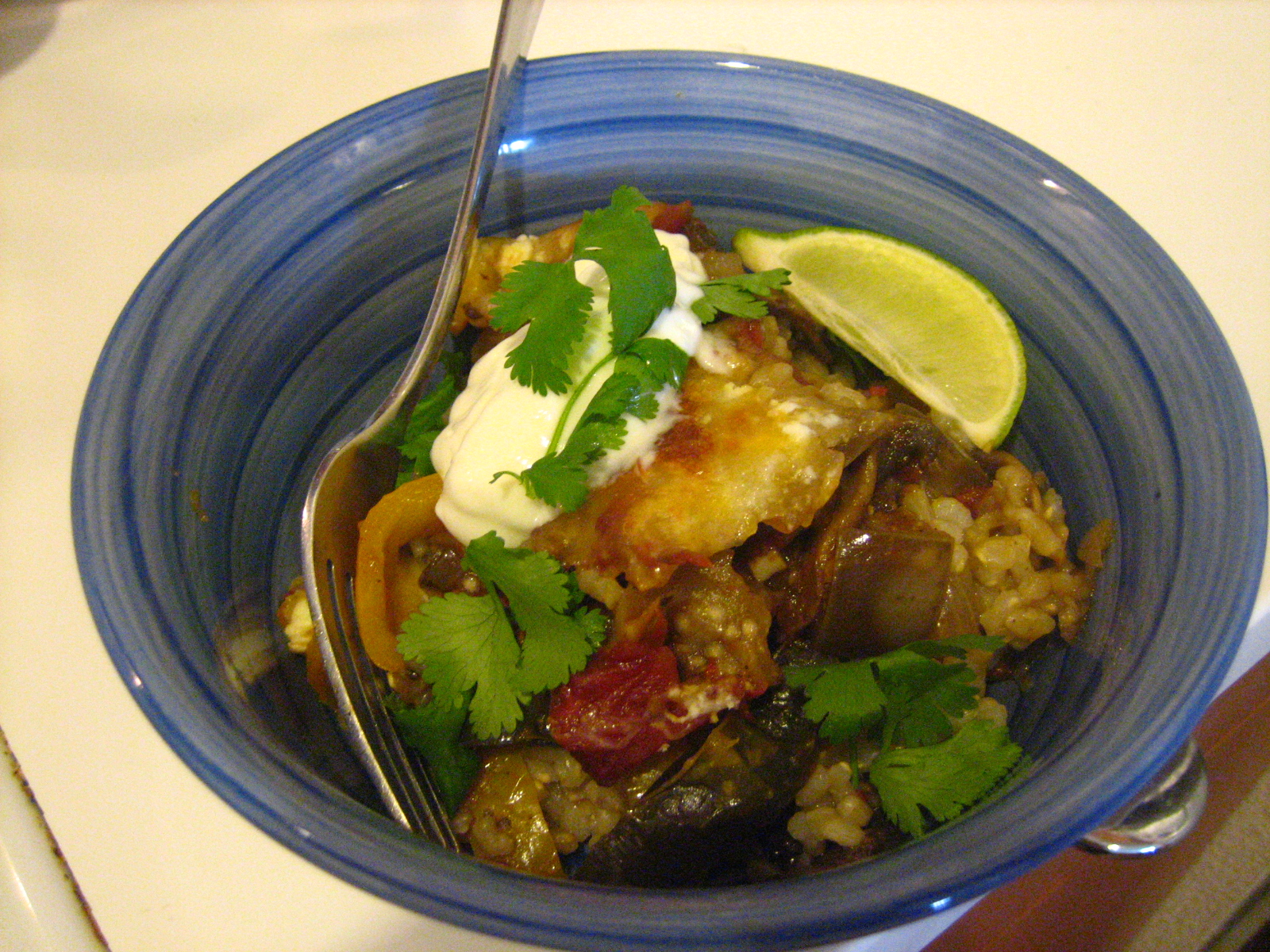