Wait a second. It’s really already been 9 days since I last posted?

Honestly, I have no idea where May is going. Hmph.

Well, in any case, I’m happy to report that the ban on Roquefort was lifted! From The Atlantic: 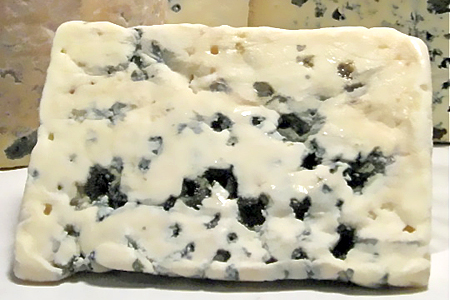 In its final days, the Bush administration imposed a 300 percent import tax on France’s famous Roquefort cheese, among other luxury food imports from Europe. Designed as retaliation for a European Union ban on imports of U.S. beef containing hormones, the measure was announced on January 13 and was to take effect at the end of April. Had this happened, it would have eradicated the U.S. market for Roquefort.

All winter, goodbye celebrations for Roquefort took place in cheese shops across the country. My personal farewell to Roquefort took place early last week, during the final tasting of a three-day cheese seminar. Roquefort was the last cheese on the plate, and as 20 students solemnly focused on their sliver, I realized it was the best Roquefort I’d ever tasted on this side of the Atlantic Ocean.

Roquefort is a wet, delicate cheese, vulnerable to the trials of shipping, and often the melodious balance of flavors looses its pitch in transport. But this sample dissolved cleanly in my mouth, leaving behind a faint trace of the crystalline grit that forms where the blue veins meet the fatty white cheese. The very salty and very sweet flavors–typical of Roquefort–sparkled and were balanced and inextricably intertwined.

The sheepy richness of the paste was faint but detectable under the blue coppery notes of the blue. After describing the flavors to the class, I brought out the remnant of the wheel we had tasted. It was wrapped in white foil and its middle was belted by a blue, white, and red ribbon, evoking France’s emblematic Marianne in Delacroix’s famous painting of “Liberty Leading the Masses.”

I could picture what was to be the last container of affordable Roquefort leaving the caves of Cambalou in central France, with every wheel carefully selected for the US. The best of the crop was sent to our shores because when words and political policy fail, a tenacious negotiator will up the ante with a more intuitive argument.

This tactic has worked brilliantly in French history: after the Napoleonic wars, the fate of a defeated France hung by a string at the Congress of Vienna. Talleyrand, a brilliant diplomat, represented France during negotiations. At dinner, he served a heavenly Brie de Meaux to Prince Metternich, the powerful Austrian statesman. That moment of culinary delight is said to have softened Austria’s resolve to punish France and safeguarded its geographic boundaries.

In class, our ebullience over tasting the Roquefort turned grim. How were we to conduct our cheese businesses if stripped of such a defining classic?

Two days later, Europe decided to increase its imports of non-hormone beef and the ban was lifted. Roquefort lives.

And I wonder–was President Obama served one of those memorable Roqueforts?