For as long as I can remember, I have disliked raw celery. When I was a little kid, celery sticks slathered with peanut butter were a common snack at my after school child care program; I’d usually lick up the peanut butter, then throw the celery away. Even sadder were the days when they’d serve celery sticks with Ranch dressing. I’d use the celery stick to spoon the dressing into my mouth, then–of course!–throw away the vegetable. It was always such a strange aversion–there were no other vegetables I disliked, so it wasn’t like I was one of those kids that hated anything green. And I could handle celery cooked, but eating it raw was a punishment worse than death.

“What’s wrong with you?” my grandmother used to say when I’d turn my nose up at it. “It doesn’t taste like anything! It’s like eating crunchy water.”

So about 5 years ago, when I came to San Francisco to visit my uncle over a long weekend, I was a little hesitant when 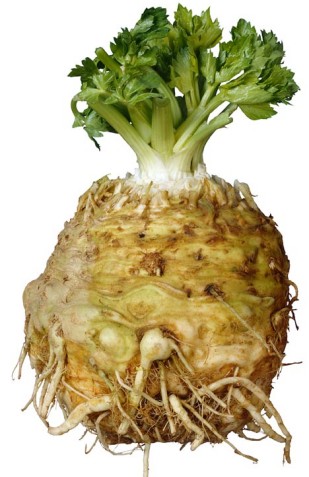 he took me to a small bistro in Healdsburg, and ordered us a prix fixe menu that included cream of celery root soup. Celery root, also called celeriac, is the huge, bulbous part of the celery plant, lodged firmly beneath the soil and out of sight. Not like it’d ever have a chance, even if it was above ground. As they grow, the celery stalks and leaves tend to get a bit…bushy (Have you ever tried to uproot a mature celery plant? Believe me, it’s tough work). Actually, if we’re going to be completely accurate, I just wiki-ed celeriac, and it turns out the botanical name for that particular part of celery anatomy is hypocotyl:

“a part of a germinating seedling of a seed plant. As the plant embryo grows at germination, it sends out a shoot called a radicle that becomes the primary root and penetrates down into the soil. After emergence of the radicle, the hypocotyl emerges and lifts the growing tip (usually including the seed coat) above the ground, bearing the embryonic leaves (called cotyledons) and the plumule that gives rise to the first true leaves. The hypocotyle is the primary organ of extension of the young plant and develops into the stem.” 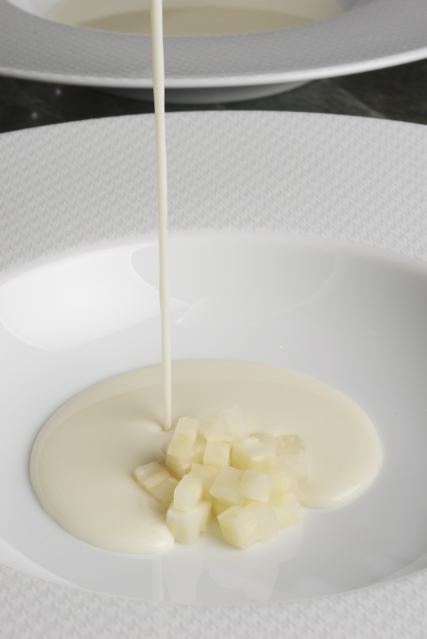 Oh man. Look, I know it’s nearly summer and all, but one look at this and Iwas wishing for a blustery, wintry day. Then again, knowing San Francisco summers, I’ll probably get my wish very soon. And Michael Ruhlman’s recipe for the soup is so simple–it’s truly a thing of beauty! I can hardly wait to try it on my next cold weather comfort food day.

(The following recipe is adapted from Michael’s new book Ratio)

Lightly cook flour and butter in your soup pot over medium heat.  Add the onions and cook for another minute or two.  Add the milk and simmer until itâ€™s thickened, skimming any film that gathers on the surface.  Salt it to taste.  Add the chopped vegetable and cook gently until itâ€™s tender, about fifteen minutes.  Puree the soup in a blender, taste for seasoning and add more salt if necessary, strain it through a fine mesh strainer into a clean pan or serving dish, add the cream, season with lemon juice as necessary.  Reheat the garnish in a microwave oven or in simmering water.  Divide the garnish among the bowls, then pour in the soup (reheated as necessary).