The funny thing about a new year is as much as it symbolizes grand change, the turning of leaves, the wiping away of all things bad from the past year, life baggage is life baggage.  As much as you’d like to hurl it off a bus somewhere on a dark highway in Nicaragua, you’re stuck with it.

So, here’s the thing.

I’m really, really excited for 2009.  As up and down and crazy and frustrating and exciting as 2008 was, I could do with a much lower key, steady, stable 2009.  And I’m trying to make it happen.  But I chose a really bad time in American economic history to look for steady and stable.  So we’ll see what the first few weeks of the year bring.  My general nature means that I’m optimistic, but the realistic, logical side that Joe seems to have somehow injected into a tiny corner of my brain these last 6 years tells me I might be in for a bumpy first quarter.  Le sigh.

Nicaragua was the bomb, yo.  I’d much, MUCH rather be kicking it on a surf board down there right now than scouring every last website and job board on the Internets 24/7.  Oh, you didn’t know I surfed?  Well, I didn’t.  Not until December 28 at least.  Joe and I took a lesson, and were surprisingly really good.  He got up on his first try, I got up on my second.  It looked a little something like this that day: 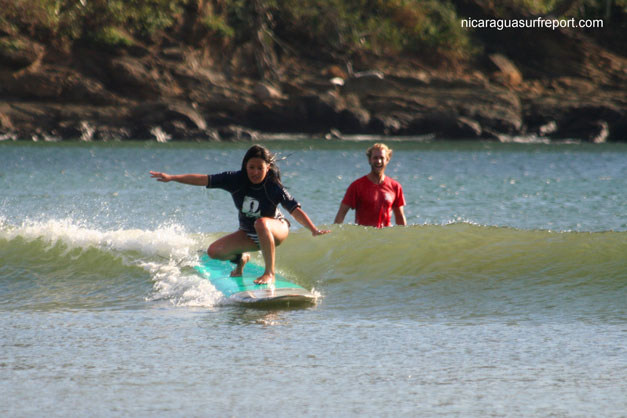 The next day, ready to join the Pro Tour, we went and surfed on a beach that had waves similar to this:

It took us at least half an hour to get over the size of the waves (and all the locals who were on this especially remote beach, looking at us in wonder…just who do these Yanquis think they are???).  But in the end, I caught a couple gnarly waves, and a good time was had by all.

Christmas dinner was magical.  We ordered pizzas from a local pie shop in San Juan del Sur.  A sweet Nicaraguan boy drove it up to our hotel on a moped.  Then, we ate them out on our patio, the weather a balmy 80 degrees, local beers to wash it down, with only candles and the stars giving us light to see the food and each other.  But nothing too romantic — my family was there, and we talked a lot about birds.

Five days into the new year have already been a little stressful (how this is so, I’m not sure), but today, to make myself feel better, I indulged in one of my most favorite comfort meals: really good, crusty, rustic bread, goat cheeses (today, plain chevre that I mixed with freshly chopped herbs, lemon zest, garlic and seasoning, as well as a Boucheron), Molinari hot dry salame and olive and hot pepper tapenade.  It is the dinner of champions, I tell you.  I devoured it all while watching episodes of Anthony Bourdain: No Reservations, and suddenly I wanted to be in Peru, Puerto Rico and Mexico DF all at the same time.

There’s an accurate description of my happy dinner this evening made by Ignatius J. Reilly, one of the greatest fictional characters of all time, in A Confederacy of Dunces, which I’ve been re-reading (and consequently, is still one of the best books ever written.  Go read it.  NOW!):

So we see that even when Fortuna spins us downward, the wheel sometimes halts for a moment and we find ourselves in a good, small cycle within the larger bad cycle.  The universe, of course, is based upon the principle of the circle within the circle.  At the moment, I am in an inner circle.  Of course, smaller circles within this circle are also possible.

Then again, Ignatius ate 12 hot dogs made of rubber, cereal and tripe in a span of about 15 minutes, while dressed as a cross between a hunter, a homeless man and a pirate, so the jury’s still out if he’s right about my luck.  If you have no idea what I’m talking about, just know that there’s a Pulitzer-prize winning novel which tells a hilarious tale about a fat ass dude who studies the philosophy of Boethius and pounds hot dogs and Dr. Nut and goes to movies every night just to yell at the screen.  You seriously need to read this book.  It’s hysterical.

And with that, I think it’s just about time for bed.